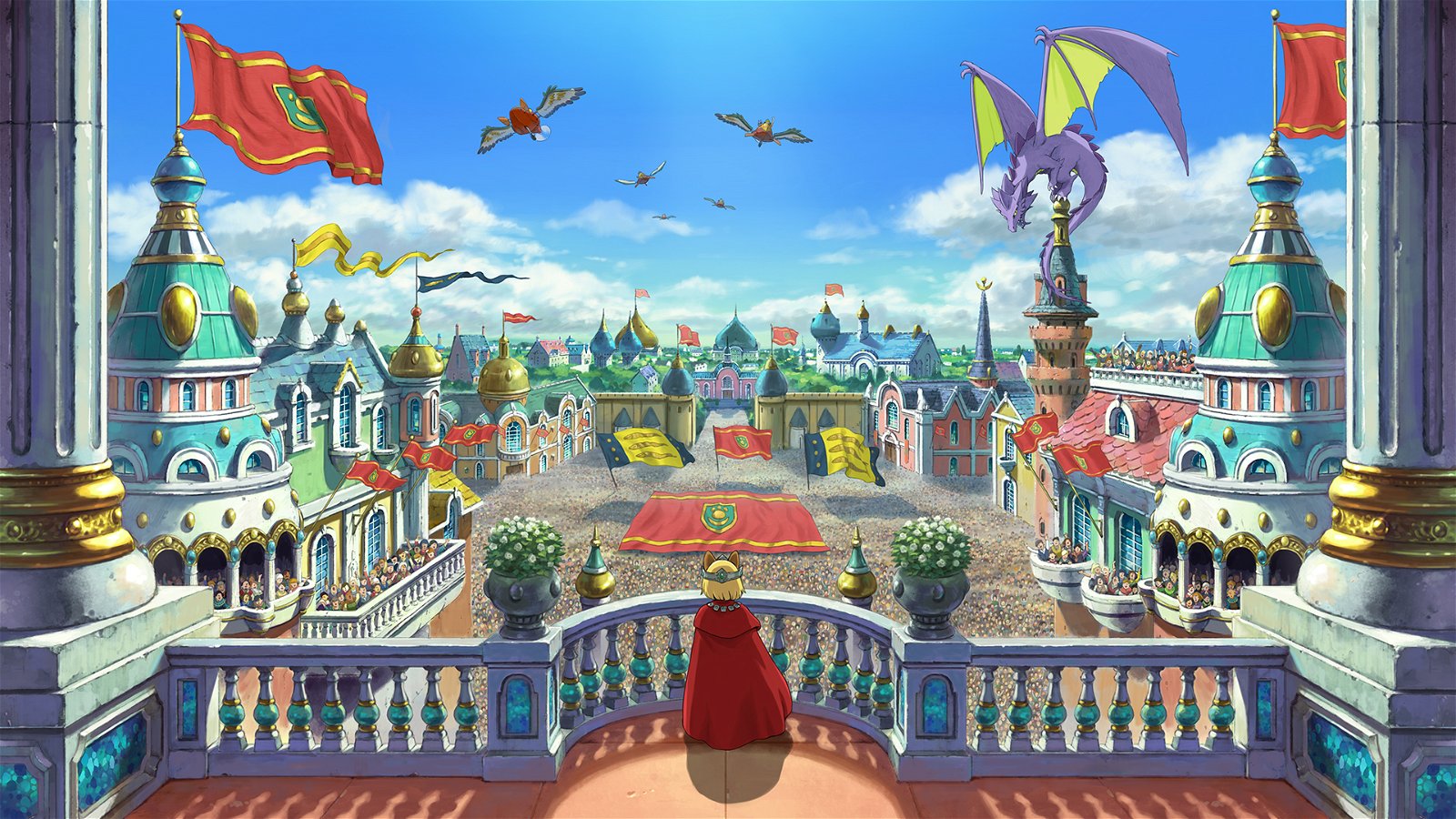 The original Ni no Kuni was a dream collaboration the likes of which my heart—swelling with adoration throughout adolescence as I became enraptured by the worlds of Princess Mononoke and Spirited Away—could scarcely take when it was first unveiled. A fully-fledged RPG delicately crafted with the artistic finesse of Japan’s internationally-renowned Studio Ghibli, Ni no Kuni was poised to set the world on fire. To my disappointment, it didn’t; an awkward battle system and a bumbling third act that poisoned the game’s narrative kept it from entering my personal hall of fame. Enter Ni no Kuni II: Revenant Kingdom, a sequel set in the distant future that aims to achieve what its predecessor couldn’t. And achieve it does: though bereft of its partnership with Studio Ghibli, Ni no Kuni II is a sublime experience, one that showcases developer LEVEL-5’s growth over these past five years and stands among the most engrossing RPGs to release this console generation.

Taking up the—literal—mantle of Evan Pettiwhisker Tildrum, the adorable, displaced cat-prince of Ding Dong Dell, the player embarks on a globe-trotting journey to build a new kingdom and unite the disparate nations of the world under a banner of peace. No pressure, right? Evan isn’t alone in his endeavour; he is joined by a ragtag group of supporters and confidants led by Roland, a transdimensional visitor and the president of a country that bears more than a passing resemblance to the United States. While straightforward, Ni no Kuni II is a refreshingly positive story that espouses the virtues of compassion, community, and forgiveness. More importantly, it feels complete. The game is exceptionally well-paced, and although the supporting cast doesn’t spend as much time in the spotlight as Evan and Roland—where was your character development, Tani?—the story resolves conclusively after a comparatively brisk forty to fifty hours. If I hadn’t done my research, I would have had no idea that two expansion packs are in the works for Ni no Kuni II because it doesn’t feel like it’s missing anything. Such is the hallmark of a story written right the first time around.

That cohesive vision extends to the interplay between its gameplay systems. Ni no Kuni II leans into the “action” half of its “action RPG” moniker more than its predecessor did; previously, the player controlled a character controlling a familiar, issuing clumsy commands that felt imprecise much in the same way a message loses clarity throughout a game of telephone. Now, the player fully embodies their selected character with one-to-one input, including access to snappy melee and ranged attacks, dodge rolls, a block button, and a customizable skill palette. Each character can equip three melee weapons, powering up a “Zing” meter with each successful strike, which can be unleashed at its maximum charge to bolster a skill with additional effects or hits. I took advantage of the game’s automatic switching feature to ensure that I always had the most appropriate weapon at the ready, but tactically-minded players can adjust their weapons manually if they prefer. A final layer is added early on through Higgledies, tiny elemental sprites that run around the battlefield independently and aid the player in various ways. Four Higgledy teams can be assigned to the party at once, and collecting the hundred or so Higgledies around the world makes for a compelling side activity. Plus, they’re like, super, super cute.

While combat in Ni no Kuni II is enjoyable, the real meat of the experience is Kingdom Mode. Evan’s desire to build the new country of Evermore isn’t something he achieves passively as the story marches onward; it’s something the player actively contributes to over the course of the game, transforming it from a tiny hamlet to a bustling kingdom full of life. The currency used to develop Evermore, Kingsguilders, accumulates in real time so long as the game is running, and can be invested into myriad facilities that make adventuring more convenient and rewarding. Evan can create new weapons and armour, increase his movement speed, develop new magic spells, gather resources, and much, much more. Every facility can and must be staffed by citizens that Evan can recruit from kingdoms around the world, each of which has a unique name, appearance, and skill. There are over one hundred people to scout through side quests and errands, and their vibrant personalities help Evermore feel like a living place rather than a glorified series of menus. Because every bit of investment is represented visually, Evermore is a joy to stroll through as it develops—I haven’t had this much fun constructing a “home base” since the likes of Suikoden or Skies of Arcadia. That I immediately jumped back into Kingdom Mode after watching Ni no Kuni II‘s credits roll is a testament to how fiercely enjoyable it is.

It’s hard to illustrate the many ways how Ni no Kuni II “feels” so good to play. Much of its artistry lies in small details, from the way characters slightly hunch and tread carefully when they go down stairs, to the existence of an in-game social media service—cheekily titled “Leafbook”—where characters post photos and gossip about the international state of affairs. Everything else seems to fall into place organically. The control configuration is just right. Animations are snappy and characters respond well to input. The enormous world map has a fantastic sense of scale and is stuffed to the brim with secrets to discover. Fast travel is sensible and maximally convenient. Quest markers are non-intrusive and easily visible. I haven’t even touched upon Skirmish Mode, which consists of breezy, large-scale RTS battles between Evan’s army and any forces foolish enough to oppose him; only a few of these are integrated into the main story, yet they’re entertaining enough to be worth seeking out, and don’t feel like the chore they easily could have become. If I have a single complaint, it’s that Ni no Kuni II suffers from inventory bloat. There are a huge number of items entering the player’s coffers at any given moment, and it can be tough to sort out what is essential and what isn’t. Luckily, I never encountered any sort of inventory limit, and I was content to utilize the auto-equip function to keep my characters outfitted with the best gear available.

In less sophisticated language, I’m flat-out smitten with Ni no Kuni II. It is a crowning—heh—achievement for LEVEL-5 that marries a timeless audiovisual presentation with an inexhaustible procession of entertaining, rewarding mechanical functions on every engageable level. It’s as close to perfect as I could have possibly hoped it would be. To all RPG developers, this rallying cry for excellence is a banner I hope to see more games united under from here on out.

One of the best JRPGs released in ages, Ni no Kuni II: Revenant Kingdom is as charming as it is intricate, full of expressive characters and addictive gameplay systems that mesh together in perfect harmony. 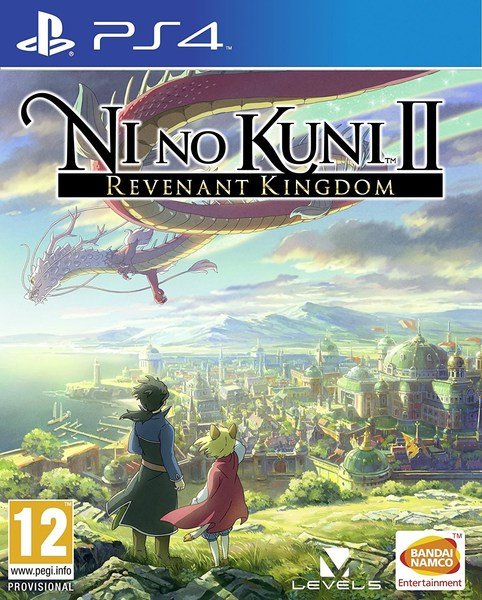