Night in the Woods Review

A Melancholy Yet Realistic Tale
SCORE: 8.5/10 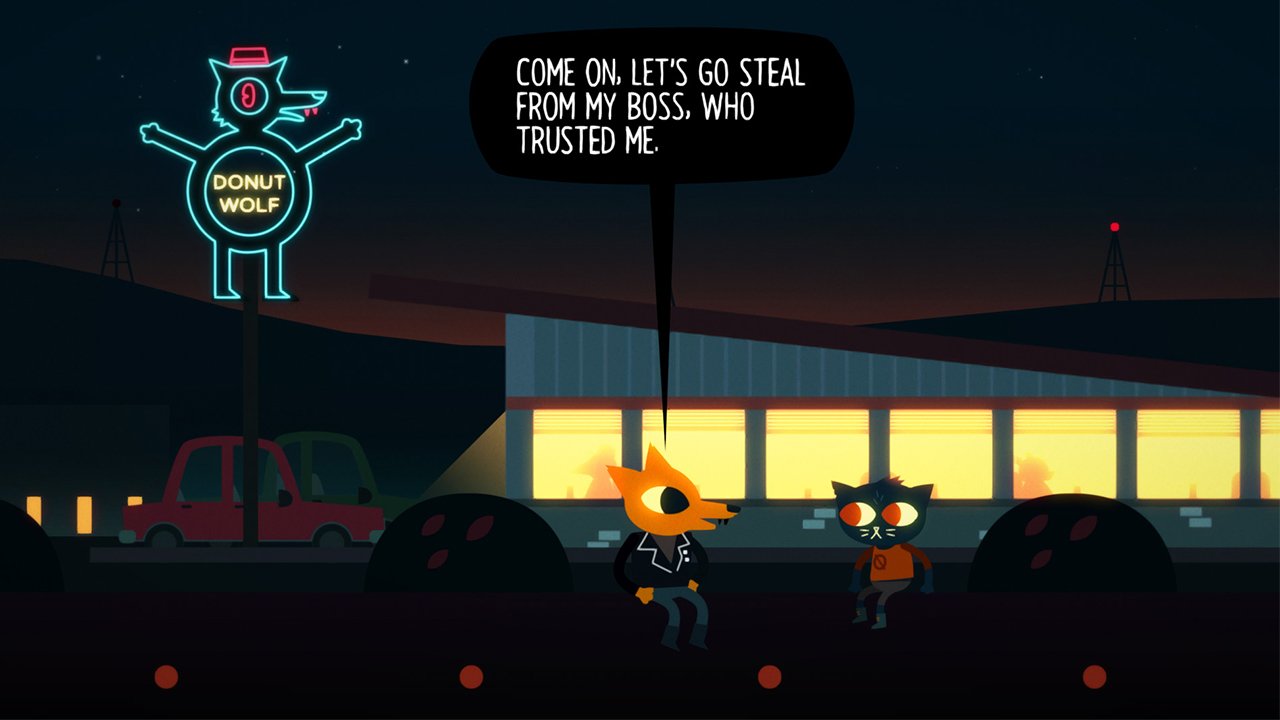 Sometimes games can hit a little close to home. While most of us probably aren’t retired space marines or heroes of time, we’ve all dealt with loss in some way, or tried to find our place in the world. How we choose to deal with it, whether it’s grief or anger, is different for every individual, but games can help us cope. With that in mind, I have a feeling Night in the Woods is going to be that coping mechanism for a lot of people out there.

While the thought of playing a game with lots of cute looking animals is probably a good back of the box type selling point, Night in the Woods gets pretty dark pretty quickly. It immediately leads off with the death of your grandfather in poem form, lightly hinting that no one really cares that he’s gone. Despite this immediate tone-setting action, I wouldn’t say Night in the Woods is depressing. It’s sobering. These critters might be cute and anthropomorphic, but the world is a real reflection of our daily lives.

There are pundits arguing on the TV about the economy. Animals have jobs, many of which are blue collar in nature, and some of them hate them. Other are unemployed (and have been for some time) and are either angry at the system that failed them or are unable to get another job. As I started exploring the town of Possum Springs, I noticed more and more “out of business” signs popping up.

All of this is seen through the eyes of Mae, and extension of the player. Back from college (well, sort of, as she quit) you get the feeling that she left a lot behind — whether it’s friends, family, secrets, or memories. As someone who remembers this transition (and being judged for leaving or even staying when others transferred schools), it hit close to home. If you really need a mystery or some other reason to stay tuned in, the central focus doesn’t disappoint with its payoff, even if it does feel like it’s getting in the way sometimes of the incredibly grounded life story of Mae.

A lot of Night in the Woods is carried by its great writing. It reminds me in a way of the team behind the Cartoon Network program Regular Show, with age-appropriate humour that isn’t too preachy, nor too immature. The characters are also very emotive, in a way that enhances the story and in a gamey way that provides hints to your next goal. A lot of thought went into connecting the world and the characters inside and out. Initially, I thought there wasn’t a menu and got a little frustrated, but soon realized that it was actually built into the notebook that Mae uses to jot down her inner thoughts.  It’s rad!

In case you’re wondering, this is an adventure game, but you do have some semblance of control. It is gated when it comes to locations, but nearly every exposition, or even random click, gives us some glimpse into the universe as it relates to Mae. Light platforming elements (with a Mario 64-esque triple-jump) break up all of that text, as do mini-games.

Night in the Woods reminds me of an old, relatively unknown PC adventure gem called The Adventures of Willy Beamish. It’s unconventional, deals with a younger character, and while irreverent, has a lot of commentary on life that applies to just about everyone. I have a feeling Night in the Woods is going to benefit a lot from word of mouth the same way Undertale did, but just in case it doesn’t, take my recommendation – go play it.

A melancholy but realistic tale of creatures in a town called Possum Springs.