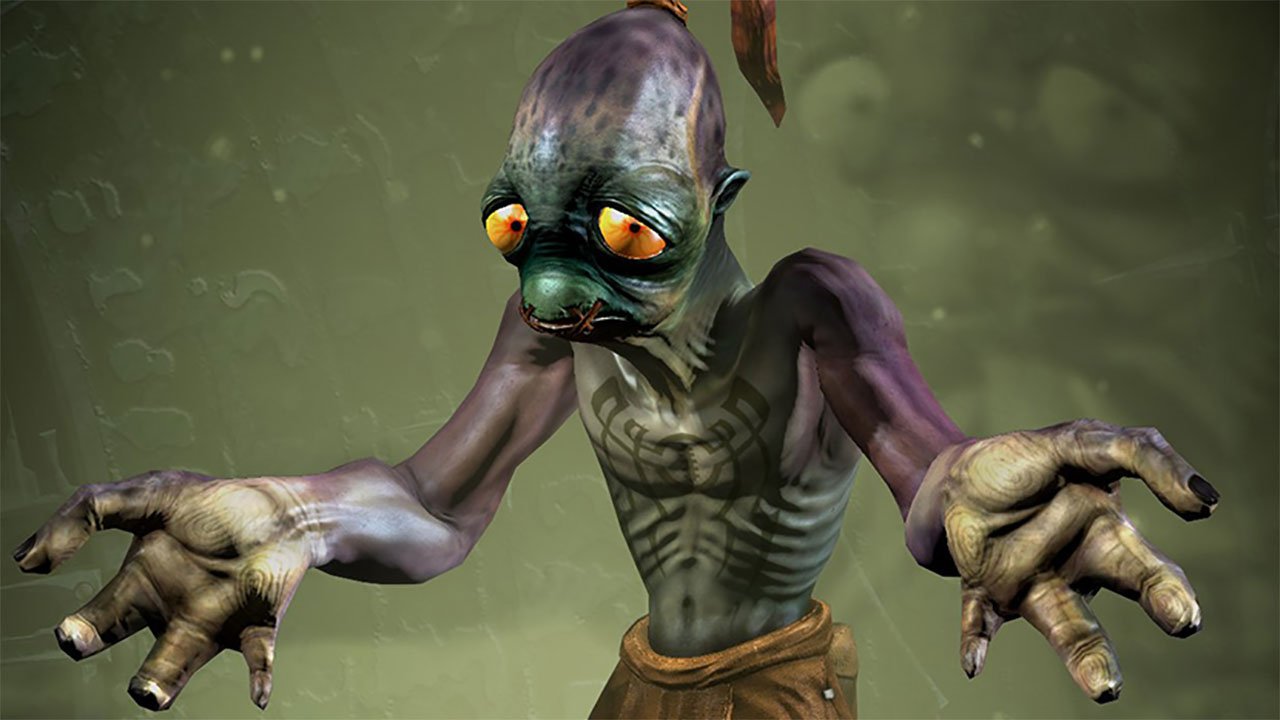 Some games are just going to remain weird no matter how old they get. Abe’s Oddysee, released in 1997, is one of those games. The eccentric developer, Lorne Lanning, created a PS1 platformer with a world and cast of characters unlike any other. Now, Abe is back and on much shinier, more powerful hardware, with a suite of modern day updates to bring him into the 21st century. Maybe this is what he’s been waiting for all this time.

Stick It To The Man

Abe starts out as just another alien janitor working in just another alien meat factory for just another Alien Evil Multinational Corporation ™ when, in Soylent Green fashion, he finds out that the next food product scheduled for release is… PEOPLE! Or his people, at least, since other species have previously been cannibalized in the pursuit of profit. Now with a personal stake, Abe abandons his janitorial life and platform/puzzles his way through an adventure to free his people from a destiny fraught with literal slaughter.

Although this is yet another in what feels like an endless series of HD remakes, this game in particular stands out for both the age of the game and the sheer effort that’s gone into it. While similar games like Another World have gotten mild adjustments to preserve the visual integrity of the original game, the original Oddworld was, like Donkey Kong Country or Killer Instinct, a game that was 2D, but based on pre-rendered, 3D artwork. Just Add Water have gone into Lorne Lanning’s bizarre lore and made EVERYTHING a real time 3D object. In other words, Oddworld has been completely overhauled and now looks much, MUCH better than its original debut. It’s a stark reminder of the advancement in graphical tech that the pre-rendered cutscenes, backgrounds and characters of 1997 can now be easily rendered in real time, and at 60 frames per second. It’s clear that a lot of love, care and respect for the franchise has gone into this restoration effort, and despite the move to “true” 3D, nothing looks or feels out of place in this new version of Oddworld. Visually, there’s just no excuse to keep playing PS1 disc or download version of the game anymore. Mechanically, however, there may some issues.

The biggest change to Oddworld outside of the visuals is the tweaking of the difficulty. Like many games of the 90s, the original Oddworld could be a brutally difficult, unforgiving affair. For its 21st century debut, Just Add Water has introduced some small mercies for a new generation of gamers. At normal difficulty, checkpoints are generously scattered about the levels and Abe himself actually has a life meter of sorts, allowing him to survive a couple of shots from enemies before dying. This is a big concession from the original version with its sparse checkpoints and one hit kills, which has now officially gotten a promotion to “Hard difficulty” in this latest game. Purists who buy this game can safely start, with noses turned up contemptuously at newbies, and just select the hard difficulty straight off the bat. Everyone else, with less patience, and less of a tolerance for punishment, can just enjoy the game on normal difficulty.

It should be noted that even on the normal difficulty level, the game is far from easy. As with most platformers, timing is everything and mistakes will lead to death. The navigation of levels is also complemented with some original puzzle design. Aside from needing to pull levers and avoid land mines, Abe must also sometimes use communication—and even possession of enemies—to surmount the obstacles in place. And these puzzles aren’t always obvious or easy, so expect to get stuck occasionally when it seems like there’s no possible way past a mine field and disintegration force field… until you realize the exact combination of stealth, timing and object manipulation deviously required to get it all sorted. Another important thing to note is this doesn’t appear to be an exact recreation of the original game. Purists shouldn’t expect that every level and secret room is laid out exactly way it was in the ’97 original. That aside, what’s on show here is still a unique—and occasionally maddening—puzzle platforming game with a sense of identity unlike anything else on the market. It’s priced at $30, which may raise a brow with gamers used to $15 or less for downloadable games, but the production values, full trophy count—including a platinum—and length of the game make it more than a diversion for a few minutes. You’ll want to sit down for a while with Abe’s Oddysee, and the trip—as bizarre as it is—is a fun one.

The biggest change to Oddworld outside of the visuals is the tweaking of the difficulty. Like many games of the 90s, the original Oddworld could be a brutally difficult, unforgiving affair.