Okami HD is the dog game I’ve always wanted to play, capturing the joy and laughter that having a loving canine brings to a life. It’s simply a delight to take off with Amaterasu (Ammy) into the fields, watching flowers spring up with her every step. It’s endlessly charming to see people light up at her presence or when she helps solve their problems. Everywhere Ammy goes, she improves the lives of those around her.

Ammy may be a goddess, but that doesn’t stop her from digging up gardens, nipping at people, and sitting there with a playful grin on her face, wagging her tail as people deliver important information to her (or nodding off if the information is too boring and longwinded). There is a playfulness in her actions, and in those the player can carry out, right on down to having a button dedicated to barking. It loads every moment in the game, no matter how serious, with a playful nature that gets you in the mindset of a dog.

Okami HD’s character visuals strengthen this sense. The game features a sort of trembling animation style where the character’s outlines seem to be in constant motion. It’s a neat effect that infuses the game with a light, fun nature, and specifically makes Ammy feel cheerful and bouncy. The shuddering style makes her look like she is always panting, or that wind is moving through her fur. It’s a subtle effect that seems to make her appearance all the more endearing, which is quite a feat given she has few facial features with which to be expressive.

This doesn’t mean that she’s a faceless character in the game world, though. She continually shows her emotions with a tilt of the head, a wag of her tail, or a little whine or bark. It’s small stuff, but creates this sense of serenity alongside her playfulness. Her motions are subtle, implying a calm observation of the events around her. In this, she feels like a goddess. But she’s also a dog, and a tail wag tells the player she’s happy to play or pleased to see someone. She carries herself with the grace of a deity, but still has that same sense of fun one sees in their family dog.

Ammy’s warmth is matched by her courage in Okami HD. The people of Nippon are under siege by Orochi, an eight-headed beast that has polluted the land with evil and darkness. Ammy doesn’t hesitate to fight the servants of this beast, throwing herself into battle to save Nippon’s people and spirits.

When making contact with a foe, players will appear in temporary arenas with a variety of demonic creatures (all of which feature some sharp appearances filled with folkloric nods), many of which have unique abilities and quirks to deal with that make combat involved. Ammy can clobber these foes with an array of discs and sub-weapons, or draw upon her magical painting skills to cut through weaknesses.

Okami HD’s painting abilities add a lot of unique abilities to combat and beyond. Ammy can call upon a magical paintbrush that players will use to draw different symbols, each of which has differing effects in or out of combat. Players can draw a line through a foe to cut through defences, create a circle with a swipe through it for a bomb, draw dots to create protective trees, and more. Outside of battle, they can use these powers as well as draw healing circles to repair damaged trees (in a brilliant display of cherry blossoms), create objects for people, or change the world with a stroke of a brush just about anywhere.

Combat is where the game is its least compelling, though. Many foes seem to just goof around while the player bashes them, with combat being a chaotic mess of enemies bouncing around while the player stomps them. Adding the painting abilities only seems to give the player more of an edge, draining the challenge out of things. When facing the more challenging bosses, though, difficulty can spike in ways the player isn’t prepared for, and Ammy’s flailing attacks become a hindrance that makes it hard to avoid damage. It feels sloppy, but it is functional.

The aftermath shows where the strengths are in Okami HD. When enemies are defeated, the darkened land they inhabited fills with flowers, with plants shooting from the ground. It creates that same pleasant sensation one gets from a game of Flower, where the player’s actions fill a world with life. There is also powerful joy in seeing clean water and new trees spring from a place evil once held.

That same pleasure can be felt from helping people around the world. Like the NPC quests from Yakuza 0, it feels good to help people in Okami HD. As you replace lost wash poles, help a warrior build confidence, or dig up turnips for a child’s delight, it feels like getting to know friends and neighbors. It builds a sense of fun community with the game’s funny NPCs and offers a feeling of improving the world with your canine sense of good will.

It all looks lovely on the PS4 as well. Sharp colours spring from the screen and the world teems with both darkness and light depending on what the player is doing. The vibrant world deserves to be seen with the best colours and sharpest lines, unsullied by the game’s age, and it looks stunning despite the years that have passed.

Okami HD is a good action game, but it is a better game about how a dog can enhance a life. Ammy is a wonderful protagonist with a natural puppy charm, one who steals every scene with her playful yet serene expressions, and through her big heart improves the lives of those around her. She digs up the yard sometimes and barks a lot, but she means well, making the world a better, happier, brighter, and funnier place.

Okami HD is a good action game, but it is a better game about how a dog can make a life better. 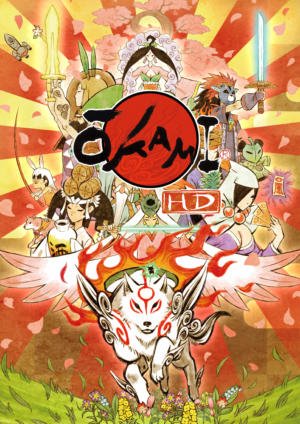