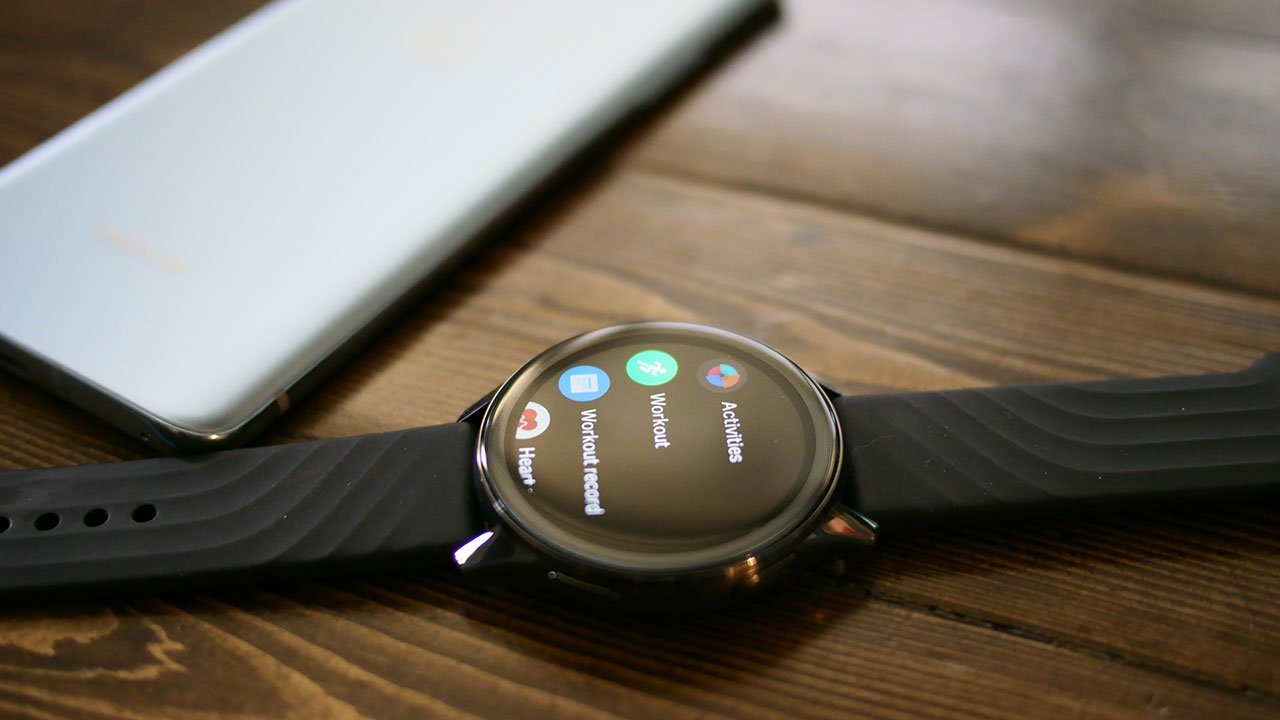 OnePlus have been making waves since they first launched the OnePlus 1 back in 2014. They are looking to do it again, this time in the wearable space, with the OnePlus Watch. This elegant offering looks to deliver value and features to a market that is dominated by the likes of Fitbit and Apple. While OnePlus managed to bring a well-designed, sleek timepiece to the market at a fantastic price, the lack of features could leave many buyers cold.

Starting things off, the OnePlus Watch carries over the company’s design concepts seen in the recent OnePlus 9 range of smartphones. The box has the simple stark red design has a minimalistic feel while still maintaining the striking look that the company has been known for. Once you open things up, the OnePlus Watch is as minimalist as the packaging would suggest, with a fluoroelastomer straps, a large round screen, and two buttons on the right side of the face.

The polished stainless-steel body holds the 1.39-inch, 454×454 AMOLED touchscreen display. The display is better than many I have used in the past and very sharp thanks to the 326ppi pixel density. It offers a vibrant image, easy to use interface, and the large screen makes onscreen inputs easy to operate even when on the go or busy doing other tasks. The use of an AMOLED panel for the screen means blacks will look striking while using the watch, and it will also use less power compared to other display options.

I will get it out of the way now, I am a fan of the display seen on the OnePlus Watch, it is vibrant without being over saturated, and feels good during daily use. Having said that, there are a few gripes I have on this front that I hope to see OnePlus address in an update or future watches. First and for most people a deal-breaker is the lack of an always on display. With most of the competition offering this, and it being many users’ biggest gripe with past watches – even from Apple – it feels like a major, avoidable oversight.

If that were not enough, since the touchscreen seems to be disabled while the screen is off, users will need to rely on buttons to wake the watch, or the raise to wake feature. And here is my second biggest concern with the OnePlus Watch, the raise to wake feature was lackluster at best. While it sometimes worked, I often had to resort to pressing a button or shaking my wrist to get the screen to display. Not the best look when this is a watch, and it is important to see the screen to tell the time.

Once you look past the screen design, you can dive into the OS that OnePlus has used for the watch. This is a bare bone offering that does what it needs to while leaving out much of the fluff found in other smartwatches. The OS feels like it was built in-house by OnePlus and as such, it will lack the third-party support that Wear OS or watchOS offer. So, until OnePlus releases an SDK, you will be stuck with what the company offers.

Thankfully, the company has given users all the major apps people will use daily. You will find a range of fitness apps, along with phone and audio options that lend enough to make the OnePlus watch useful, but still a far cry what Fitbit, Samsung, Apple, or even Google have to offer.

Out of the box, the OnePlus Watch features 15 different watch faces, apps for a range of sports including yoga and running and health apps to help track your blood oxygen and your sleep. It is a solid range of options that feel well-thought-out if not a bit empty at present. When I compared them to what the latest Fitbit Sense had, the OnePlus Watch felt decent, but did not seem as accurate. It felt like it counted steps a bit differently and had a bit of trouble tracking my sleep. That being said, these are all features that can be changed in software updates should the company want to improve the watch moving forward.

The battery life is one area I was very impressed with the OnePlus Watch. Boasting a 14-day battery life at peak performance, this is more than enough for most people’s needs. Granted should you use some of the more advanced features such as SpO2 while sleeping, or audio playback, you will cut this down – in testing even after a full 5 days of use, the watch is still sitting at around 72%, and this is with trying all the features currently available.

Charging is also very quick with the included magnetic charger, with OnePlus boasting a full week worth of charge in only 20-minutes. It is hard to judge this claim, but when testing, it charged quickly, and I have not had to charge it since. I would say for most people’s needs, one charge should last more than a week with ease, and that is fantastic especially considering the price point of the OnePlus Watch.

As someone that loves the latest and greatest wearable technology, I am honestly a fan of the OnePlus Watch. It has a simple yet elegant design and delivers enough to make it comparable to many of the smart watch options currently available. However, the lack of third-party apps and no always on display does take away from what could be an exciting timepiece.

At a $159 USD starting price, the OnePlus watch is easy to suggest people give a try if you keep expectations in check. It looks good, feels good to use, and delivers what I want from a smart watch – especially features and battery life. With a stunning screen and a clean, modern look, this is a watch that will easily find its way into my daily rotation. If OnePlus finds a way to address the nagging issues, the OnePlus Watch could overtake many of the other options as king of the budget smartwatches, but time will tell.

While lacking some features found on the latest Apple Watch or Fitbit, the OnePlus Watch is a great entry level offering that should please most people provided they have their expectations in check.