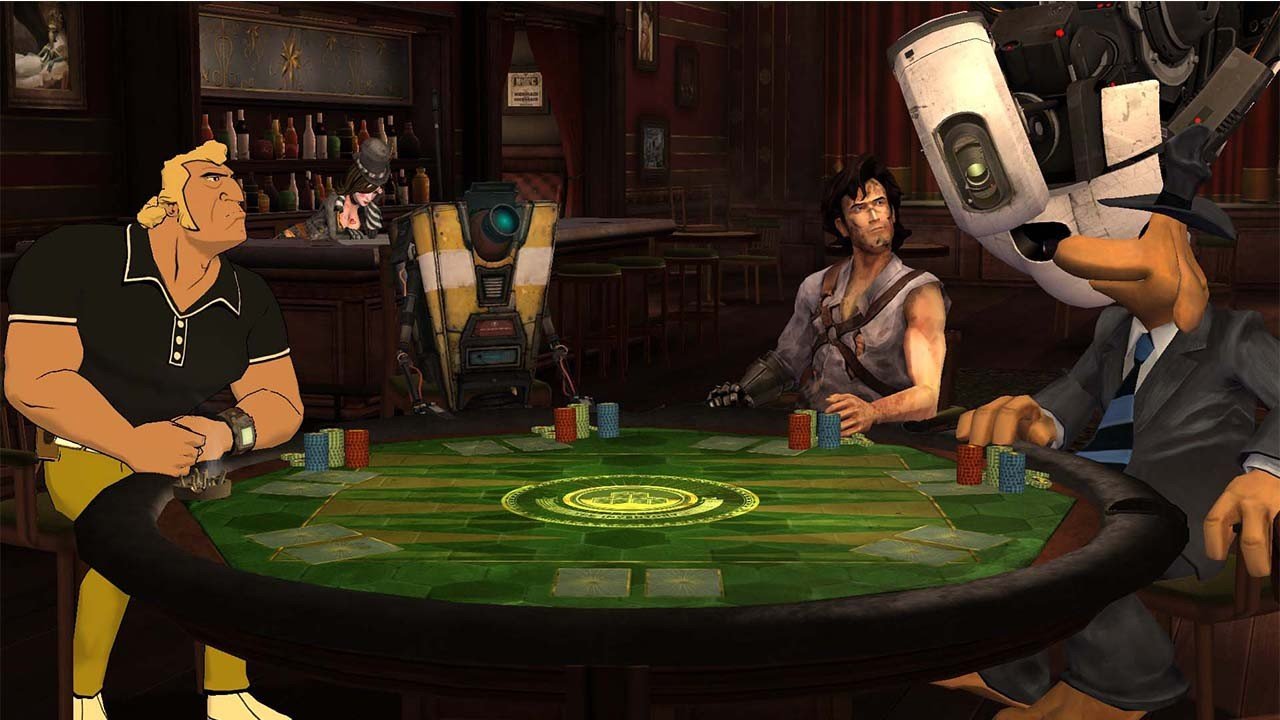 Tim Ashdown | May 1, 2013
Know When to Hold ‘Em
When Poker Night at the Inventory was released in 2010, Telltale Games was a relatively unknown developer. The company had a small but loyal following amongst the glorious PC master race due to episodic classics such as Sam and Max and Tales of Monkey Island, yet they were hardly a mainstream player.
Things are much different now that the studio has won several Game of the Year awards for their hugely successful adaptation of The Walking Dead comic books. As the developer gets set to release that property’s highly anticipated second season it’s time to revisit the company’s hard dealing roots with Poker Night 2. The first Poker Night had players staring into the stone cold poker faces of characters like Max (Sam and Max), The Heavy (Team Fortress 2) Strong Bad (Homestar Runner), and even Penny Arcade’s own curmudgeon Tycho. The game itself is simply straight-up Texas Hold ‘Em poker, but the twist is that you get to play with and watch this diverse cast of characters as they chew the fat and try to outwit each other.
Know When to Fold ‘Em
Poker Night 2 is pretty much the same idea but with a whole new cast of characters from all sorts of different mediums. This time around you’ll be hitting the felt with Brock Samson (Venture Bros.), Claptrap (Borderlands), Sam (Sam & Max) and Ash Williams (Army of Darkness). The always charming GlaDOS (Portal) has also been given a job as The Inventory’s dealer and Mad Moxxi (Borderlands) will be tending bar. Be sure to bring your thick skin as these characters try and get inside your head and rile you wherever possible. It’s the characters and their interactions with each other that are the real draw here. There’s nothing wrong with the poker itself; indeed, it’s pretty much the same Texas Hold ‘Em you can play on almost any device these days. However, what you can do is customize the look of the game by unlocking chips, felts and decks with tokens earned by playing. There’s also the added “Bounty” mechanic which makes the stakes a little more interesting. By completing three small challenges set forth by The Inventory’s manager you initiate a “Bounty Challenge” which will have one of your opponents wagering a bonus item in addition to their cold hard cash. If you win the tournament and take home their beloved object, new items can be unlocked in other games depending on your platform of choice. While playing on Xbox 360 I unlocked items for Borderlands 2 and for my Xbox Live Avatar.
Know When to Walk Away
The unlocks are nice but the real value is in the character interactions. Where else can you see Brock Samson tell Ash Williams to “man-up”, or watch a budding romance between one of the scariest robots in gaming and one of the most annoying? The conversations are funny and well written but since poker is game that can be played over and over again after a while it will become pretty common to hear almost everything these characters have to say. You may even find that they end up repeating themselves during the same tournament. They have no recollection that they may have just had the same conversation ten minutes ago. It’s not the worst thing about the game but it can get on your nerves.
Know When to Run
The worst thing about the game is something I’ve just come to expect from Telltale games and that’s animation glitches. Anyone who has played The Walking Dead will tell you that they’ve seen some of the characters behaving strangely. It could be them getting stuck in the geometry of the level or simply walking in place, and my favourite, the random teleport. The characters in Poker Night 2 barely move since they’re sitting around a table but that doesn’t stop them from behaving erratically. For example during one GlaDOS’s regular tirades about my weight the bulky A.I. teleported right through the poker table. Other times character animations can stutter, which is never good. Overall, these aren’t terrible flaws and for the most part the game runs acceptably. On the plus side, the dialogue is funny and well delivered with every original voice actor accounted for except Bruce Campbell who is strangely absent from the cast. Instead Ash is voiced by a relatively unknown actor named Danny Webber.
If you like poker and want to have a good time playing it on your 360, then Poker Night 2 is a great way to do just that. However, if you’re not into cards and have no desire to hear Claptrap boast about the size of his stack of chips I would recommend seeking entertainment elsewhere

On the plus side, the dialogue is funny and well delivered with every original voice actor accounted for except Bruce Campbell who is strangely absent from the cast. Instead Ash is voiced by a relatively unknown actor named Danny Webber.