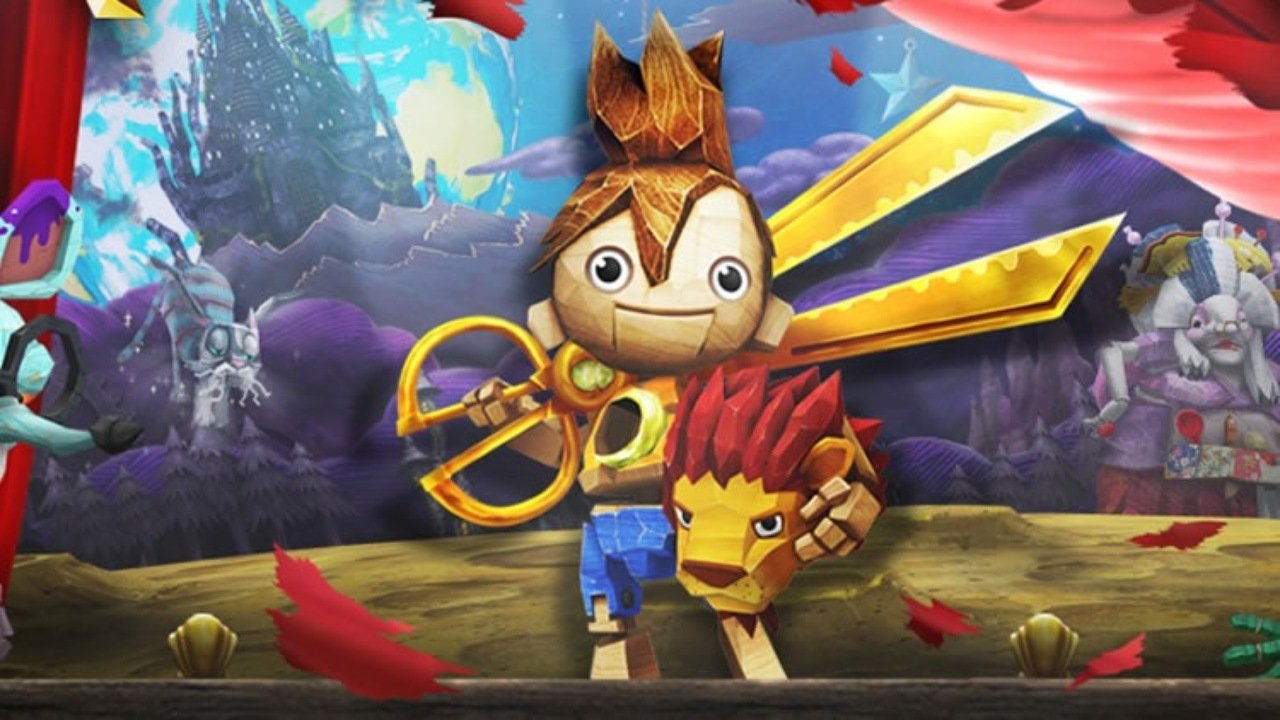 Every now and then an exclusive game comes out for the PlayStation 3 console that reminds you why you bought it instead of (or in addition to an Xbox 360).  Sometimes it’s a showpiece title built-from-the-ground-up for PS3 that makes the console sing, like Uncharted.  Sometimes it’s a game that takes on an established genre and approaches it in a whole new way, like LittleBigPlanet.  And sometimes it’s that Japanese gem of rare quality that manages to make it overseas.  In the case of SCE Japan Studio’s Puppeteer, it’s all three.

In Puppeteer, the player pulls the strings of a young boy named Kutaro, whose soul has been stolen and trapped in the body of a wooden puppet by the evil Moon Bear King.  In order to return his spirit to his body, Kutaro must join forces with a plotting witch named Ezma Potts and a Sun-princess-turned pixie named Pikarina and travel across the surface of the moon, defeating each of the Bear King’s Generals and gathering their precious Moon Shards, the source of their powers.  Eventually, Kutaro will face the Moon Bear King himself, with the ultimate goal being to restore the moon’s rightful ruler, the Moon Princess, to power, who will in turn grant Kutaro his freedom.  If you hadn’t already guessed, Puppeteer is a whimsical fairy-tale fantasy which is played out entirely on a virtual puppet stage with a cast entirely made up of puppets, and this conceit is carried throughout the entire game, complete with tongue-in-cheek, fourth-wall-breaking narration, frequent and rapidly chaotic scene changes, elaborate musical numbers (!) and a canned audience that elicits oohs, aahs, laughter and applause in reaction to almost every event that occurs on-screen.

Designed as a traditional platformer, Puppeteer smartly adopts the tried-and-true concept of “lives” and incorporates it into the titular motif as follows; Kutaro can only survive for a very short period of time without a head, and can have up to three heads to switch between, each granting him a special action (such as revealing a secret passage to a hidden bonus stage, or triggering an event that will award him with a rare head or bonus moon fragments).  When Kutaro gets hit, his head will bounce off, and much like in Sonic the Hedgehog the player can choose to run after and recollect it, or simply keep moving on, allowing one of Kutaro’s other stored heads to replace it (except in the case where Kutaro has no more heads and dies instantly).  Each of the game’s 21 “Curtains” or chapters contains various heads for the player to collect and environmental objects to interact with, most of which are not easily found, encouraging multiple playthroughs.  Naturally, throughout the game Kutaro gains a number of special abilities and items, but the most important of them all are the Calibrus, a giant, magical pair of scissors that allow Kutaro to literally float through the air by “cutting” through materials, clouds and just about any other ethereal substance, revealing the game’s enjoyable platforming mechanics.

Puppeteer proudly wears its Japanese heritage on its sleeve, incorporating all sorts of fairy tales from East and West into this beautiful and wondrous adventure, but seen through a distinctly Japanese lens. Everything from Kutaro’s name to regular appearances of objects and myths from Japanese culture, such as Koinobori streamers, frogs with Kappa hairstyles and even puppet heads styled after Jizo statues and sushi points Puppeteer’s cultural roots.  Even if you’re not a Japanophile however, it would be extremely difficult to not be blown away by the artistry and care that has been poured into Puppeteer’s visual and sound design.  The only thing that might be faulted is that the game’s gorgeous graphics, fantastic audio and solid gameplay occasionally collide to become the player’s worst enemy.  For example, Kutaro often appears so small on the screen that he often gets lost in the environment (playing on a TV larger than 40” is highly recommended), and it can be difficult to see what kind of head he’s wearing.  Since Kutaro automatically swaps out whatever head he has on with any head he comes in contact with if he’s already carrying three heads, this will often result in the player accidentally losing a head that they needed to unlock a secret later in the stage, so not being able to distinguish one head from another can be frustrating in this case.  Likewise, the audio in the game hiccups at times during loads, and depending on what the player is doing at the time, audience reactions or even the narrator can occasionally run over other dialogue or vice-versa.  Illusion-shattering? Yes, but not a deal-breaker.

Regardless, Puppeteer is a platforming visual tour-de-force that should be played by anyone with PS3 who appreciates the genre.  With its entertaining concept, stunning design, incredible animation and near-Pixar-level humor and voice-acting, it’s a great game for children and adults alike (provided you pack some decent hand-eye coordination and patience in advance).  Best of all, it’s significantly lengthy, highly replayable, and can also be can be enjoyed with a friend, with the second player controlling Pikarina via a Dualshock 3 or PS Move controller to help Kutaro uncover secret items in the stage.  The game is also 3D-compatible and plays impressively in that mode without sacrificing any visual fidelity.  In short, Puppeteer is a family-friendly triple-threat that I highly recommend.

Puppeteer proudly wears its Japanese heritage on its sleeve, incorporating all sorts of fairy tales from East and West into this beautiful and wondrous adventure, but seen through a distinctly Japanese lens 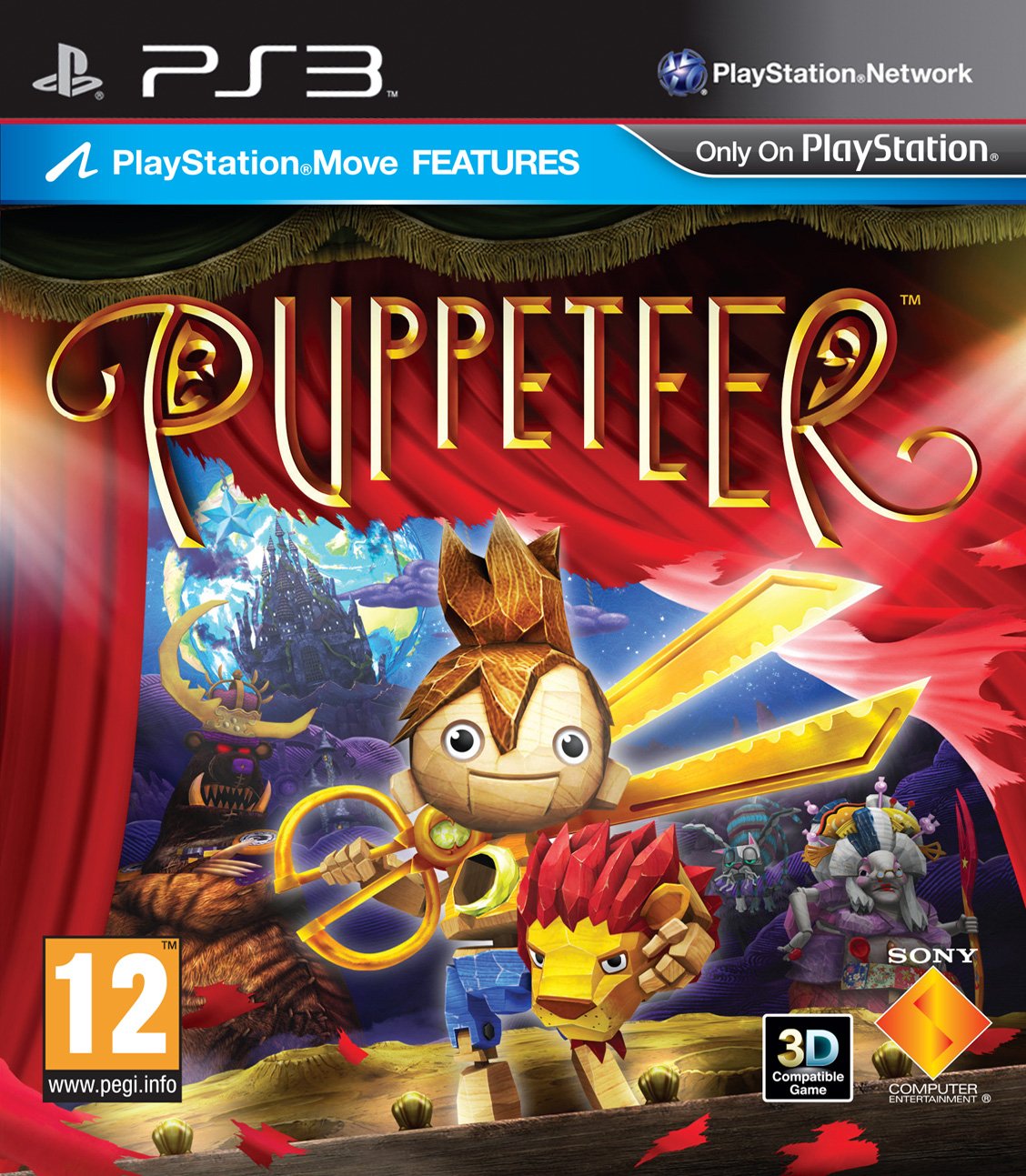