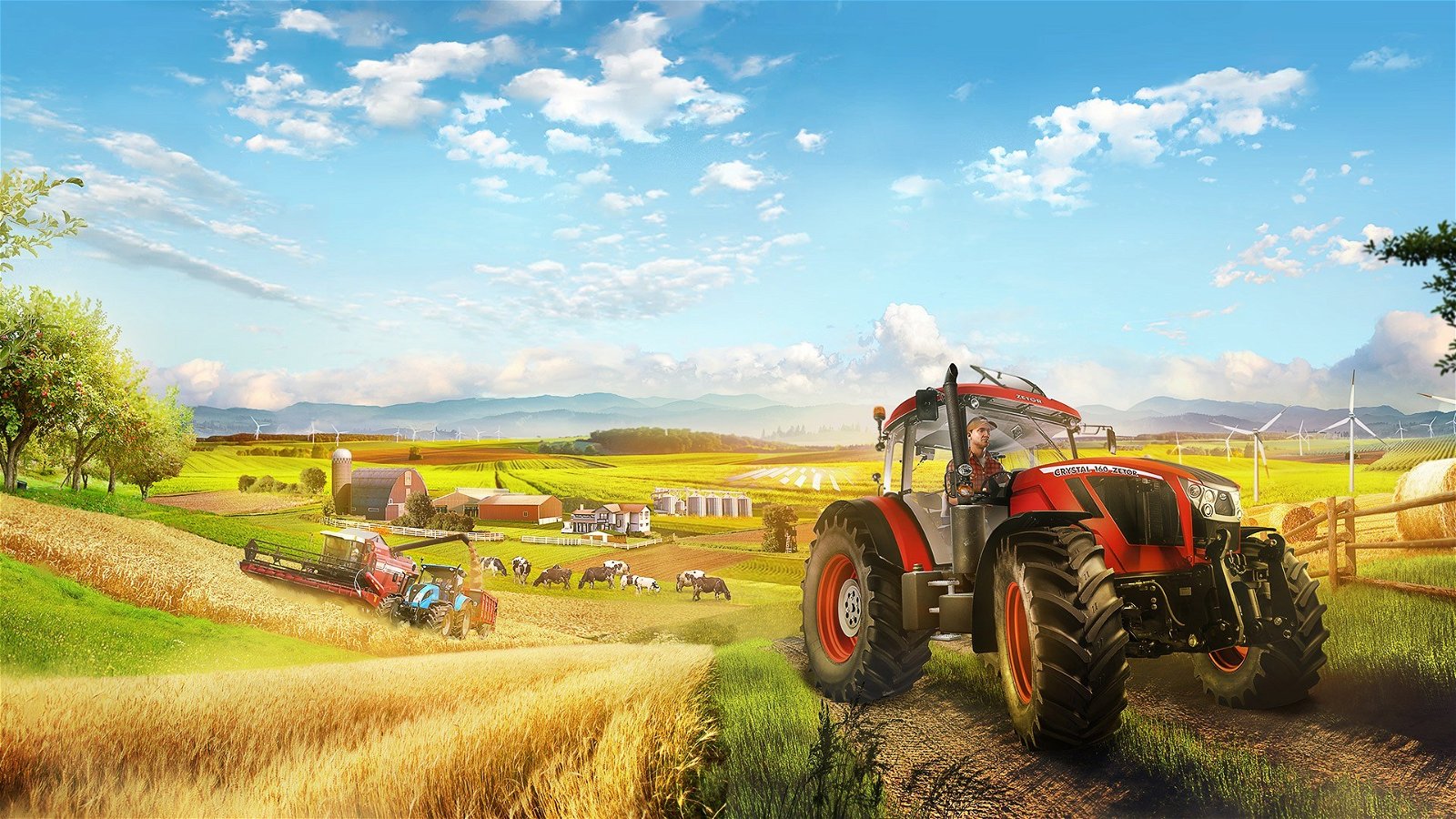 Pure Farming 2018 seems to achieve what it sets out to do; deliver the most one-to-one simulated farming experience. It’s a comprehensive recreation of life as a modern-day farmer, offering a vast aggregate of real farming vehicles—rendered with excellent detail—and complex farming and economy systems.

Despite some technical issues and some lacking quality-of-life features, developer Ice Flames nails realism, but this comes at the cost of forcing the player to suffer the painful, slow mundanity of farmhand chores and crop management.

While most farming games invite the player to tap into their creative sides and craft something of their own, Pure Farming 2018 sets its players with the bleak task of paying off inherited debt by working an inherited job—the ultimate dream-crusher. The game starts off by demanding you make the month’s minimum payment by completing simple tasks like harvesting, processing, and selling crops already on your farm. As you complete tasks, more role in—via emails to your in-game tablet—to go over every system in the game. It’s a surprisingly comprehensive yet approachable start for a genre that usually allows for more free-form land management, but it’s also one of the two overarching factors that ultimately suck the fun out of the game.

The foreground experience of Pure Farming 2018’s early-game consists of a lot of vehicle-based crop management; the plowing, sowing, irrigating, harvesting, and selling of crops took up the majority of my first 15-20 hours of playtime. There are seeders, conditioners, plows, harvesters, irrigators—the number of different types of farm equipment is baffling, and there’s always a better (more expensive) version waiting for you to purchase in the shop (in-game currency only). Every vehicle and towed attachment has a unique set of functions, of which the controls sometimes varied unjustifiably; most boiled down to similar driving and action controls, yet I had to memorize different complicated button mappings for each vehicle. It’s an unnecessarily obtuse start to an already intimidating game, but I was soon plowing and sowing away with near-ease.

But the chores you complete with these toys all add up to progress meters. Sowing the fields, running errands for other farmers, harvesting and delivering goods, spraying pear trees with pesticide, and every other task in this game is always reduced to repeating actions until you’ve reached 100% completion. Most games are about this, but Pure Farming 2018’s tasks lack conflict. Once I understood what was expected of me, completing a job became an inevitability, hinging only on my willingness to drive back and forth from points A to B a dozen times at ten miles an hour. The game offers a wide variety of optional activities, like side jobs working for other farmers on the map (NPCs) and an extensive map-based challenges list for working around obstacles like pest infestation or seasonal crops demand, and they all have interesting economic and systemic applications. But after I’d made my plans, plotted my crop fields, accepted my tasks, and prepared my equipment, it all comes down to driving through a field or to and from a buyer until a progress meter fills—and it’s always a long, slow, boring drive.

Pure Farming 2018’s late-game became a bit more interesting once I bought into the mundanity. After paying off my debts and turning a profit, I was able to pay workers to do the heavy lifting for me. This freed me up to invest more of my efforts to optimizing my farm and making new investments. I eventually had a pretty impressive business selling livestock and different crops, based on what was in demand on the in-game stock market. Like most business-focused simulators, Pure Farming 2018 succeeded in getting me to push for finances, keeping my farm’s profits in the black. But all of this exists only in menus on my avatar’s tablet. I was eventually asking myself what the point of all this was if the core game was no fun to play.

Occasionally, the game’s technical problems got in the way of my chores and management. The player is regularly expected to place equipment in a specific area for task completion, but this would simply fail to trigger in many instances. My initial attempt at playing through the tutorial was thwarted by one of these unfortunate encounters, forcing me to start again from the start and simply hope it would work the next time. (Pure Farming 2018 also lacks any autosaving features, so starting whole tasks over became a frequent hurdle.) Other annoyances pervade the game’s UI, like disappearing waypoints or a complete lack thereof, but these were minor hiccups compared to the often-misleading objective descriptions. Often, when working on a task, the game failed to delineate whether I had completed enough of a task (like harvesting and processing wheat) to continue on to the next objective. By the time I was a rabbit-breeding entrepreneur over a dozen hours in, I had gotten used to circumventing the game’s occasional bugs and oversights, but they were always there, threatening to lodge my tractor on top of a rock, rendering it incapacitated and useless.

Pure Farming 2018’s visual appeal has its peaks and valleys, too. While the map’s Microsoft Paint-level quality can be forgiven, the battered mannequin that is supposed to pass off as my avatar is hard to look at for extended periods. The rest of the world’s aesthetics, however, are far more convincing. Though textures and character models are plain and cheap looking, many of the environmental effects and animations are impressively detailed. I was particularly impressed with the vehicles—how the blades of my field-cultivator spin along the dirt, how the wheeled rails of the seeder bounce as I pull it through my freshly plowed field. A lot of work clearly went into the design of the hundreds of vehicles and tow attachments this game contains.

Ultimately, these shortcomings would be forgivable given Pure Farming’s complexity. There’s enough here for anyone interested in modern farm life to invest in and get hooked. But for me, it all comes down to gameplay, and the core of Pure Farming’s interactive content consists of menu management and slow, painfully repetitive driving. It’s gameplay without conflict, which makes Pure Farming feel, ironically, lifeless.

The only conflict comes from the early-game’s pervasive stress of crippling debt. With every mile of field plowed, seeded, irrigated, and harvested, a constant raincloud followed, burdening me with grim futility. As a result, everything I did felt out of my control. As I completed tasks, the mysterious emails from no one would instruct me not just on how to fulfill tasks, but where to go and what to buy. This poor young farmer can’t even spend his own money the way he wants to! Simple tasks telling me to “buy the Akpil Chwast XL SAD sprayer” keep me hopelessly in the dark on what Chwast is, why I’m spraying it, and what needs Chwast spraying, maintaining the momentum of middle-aged blue-collar workers asking few questions and trying just to keep their head above water. It’s heartbreaking.

Pure Farming 2018 accurately recreates the modern-day farmhand experience to a fault. As I spent hours plowing fields, I regularly would find my mind roaming elsewhere. Making sure to drive just along the lines of dirt texture patterns, I’d switch on the cruise control and imagine what else I could be doing to make better use of my time, my abilities, my life. And every time, I’d snap back to a sudden darkening in the sky; the sun’s setting, another day gone. I look out at the field and at my progress meter; 36% plowed. Resigned to finishing the next day, thoughts back on my debt, I hop in my Mitsubishi truck and drive home, knowing I’ll have to do it all again tomorrow. Pure farming to the last.

Liked this article and want to read more like it? Check out Wayne’s video on how Publishers Should Learn From CD Projekt Red, and Joe’s article Valve Acquires Firewatch and In the Valley of Gods Developer, Campo Santo. 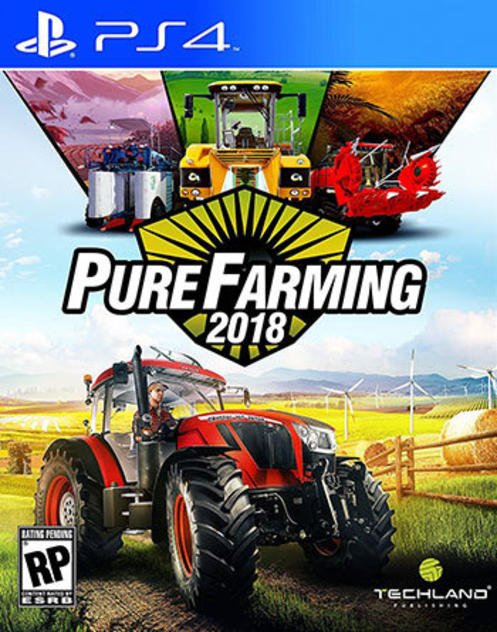