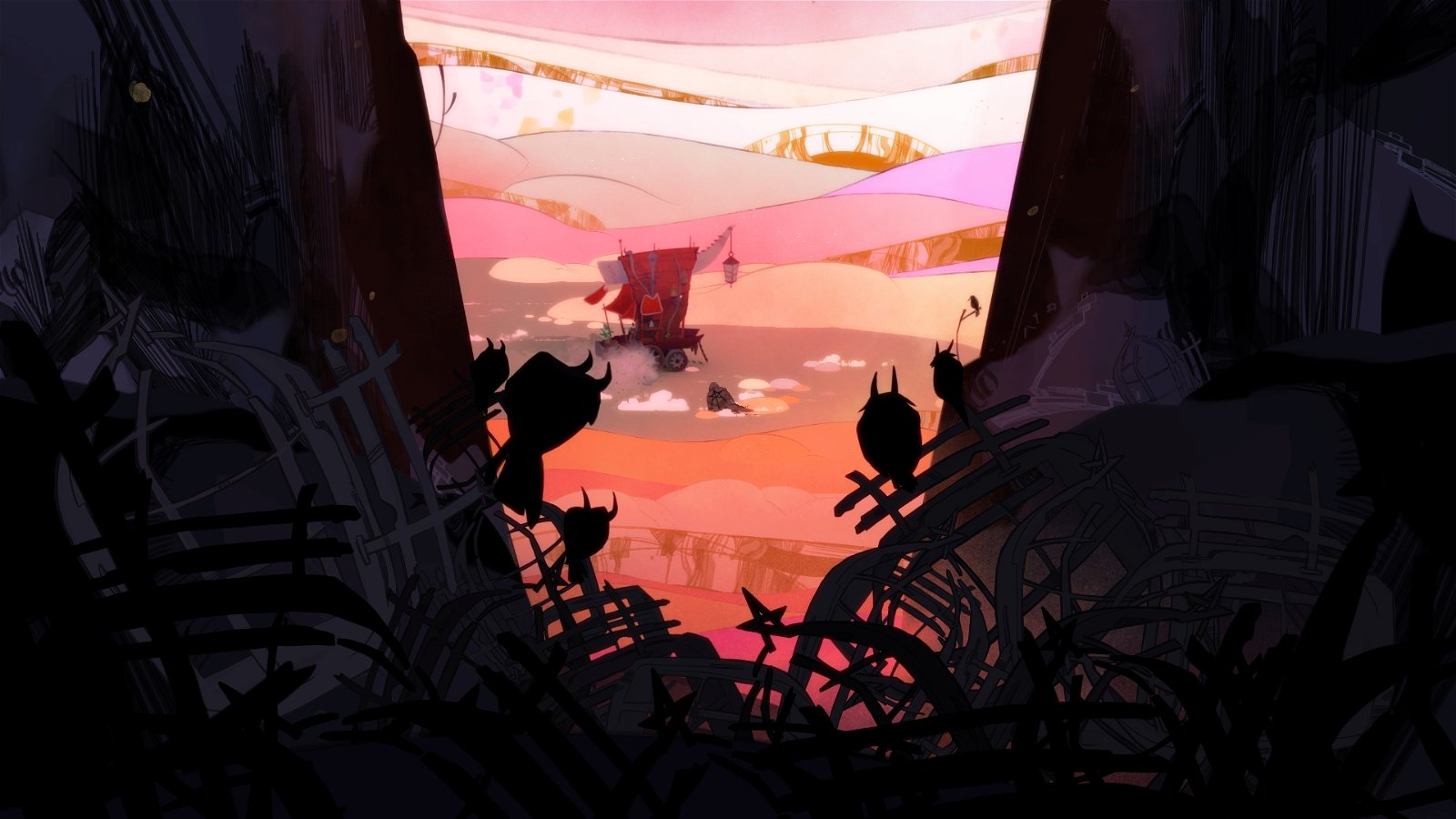 In all my years I’ve never played anything quite like Pyre. One part visual novel, one part RPG, and a third part sports game, Supergiant’s latest game manages to combine several disparate elements into something that blends genres in a way entirely its own. A visual novel that contains action RPG elements, and could even have competitive gameplay potential, Pyre juggles all of its genres masterfully, even if it lacks certain features that would allow it to live up to all of its promise.

Pyre begins with three travellers, exiled from their home in a country called the Commonwealth, and finds the player as a character known primarily as “The Reader” in a purgatory called Downside. These outcasts—all having been sentenced to time in Downside for various, unknown reasons—can only be pardoned for their crimes by taking part in competitive rituals against other exiles, called Rites. Pyre’s personal stories of redemption illustrate a world of rigid traditions and oppressive rule. As I learned more about each of the exiles, I saw that the rules of the Commonwealth had damned these people—who were often well-meaning and good of heart—to years of struggle within the Downside. I started Pyre wanting to learn more about the world around me, but I was fairly easily drawn in and became invested in seeing these good people find redemption and their way back home from this hellscape.

Despite the perilous nature of the Downside, the world we travelled through is a stunning art showcase of colour and character. Every member of your team, as well as several on the opposing side, is portrayed through gorgeous illustrated character portraits against the beautiful landscapes of the Downside. This art, all underscored by the game’s eclectic, but mostly folky soundtrack, juxtaposes dire stakes and an unforgiving world. Pyre’s lore is elaborate, and is made easy to learn by use of hyperlinks within the text of dialogue for easy reference, but the game does a good enough job of not bogging its story down with its lore while still paying mind to it in the midst of all the Rites.

Rites are sports-like battles featuring two teams of three, each attempting to throw an orb into the other team’s Pyre, which is essentially the game’s equivalent of a soccer goal or basketball hoop. Characters holding the orb are vulnerable to enemy attacks, but can quickly pass it to a teammate across the playing field. Pyre only lets you control one character at a time, but smart positioning and misdirecting your opponent can create openings and help you gain the upper hand. Early on in the story, Pyre’s computer controlled teams don’t offer a ton of challenge, and the nuance of the Rites may not be immediately apparent. As the game goes on and more character classes are revealed and team compositions are made possible, the depth of strategy Pyre offers became my favourite aspect of a game full of distinct and memorable characters, gorgeous art, and a lovely score.

Take, for example, Ti’zo, a small imp character who became part of my primary team early on. Ti’zo has an ability that, should he be taken out at any point on the field, allows him to lay down a portal to which my other characters can transport just by walking behind my Pyre. As such, I would often send Ti’zo out first, scurry over to my opponent’s Pyre where he’d be quickly taken out, but the portal that appeared later would be an easy shortcut to the other side of the field. This made for some easy scores, especially when combined with fast-moving characters like the dog-like Rukey who could easily retrieve the orb and run back to the portal without much trouble. Then I’d leave Jodarial, a powerful demon, ready and waiting at the Pyre if I needed to quickly switch to a character who could defend it.

Scoring with an elaborate play is consistently exhilarating and makes Pyre a joy to play and watch, even if it chugs when characters are bundled up and the screen gets busy on PS4. Pyre is filled with little moments of strategy and clarity like this, and as I grew to learn more about how my characters could work together, the more I yearned for an online multiplayer mode to accompany this excellent battle system. Unfortunately, as of launch Pyre only supports local multiplayer. To its credit, the versus mode Pyre has now is feature rich and lets you and a friend customize your matches with a lot of freedom. Choosing between several characters present in Pyre’s main story, customizing their specialities, abilities, equipment, and even choosing which of Pyre’s various teams you want to represent, Pyre’s multiplayer gave me everything I could have needed to set up a competitive tournament if I so desired. However, without online support, I fear that Pyre’s potential as a competitive game may be squandered before it’s had the chance to even try. Without the ability to play against other players who aren’t in the room with you, I fear any community Pyre can cultivate will be too segmented to really thrive. Perhaps if Pyre sees success this could be implemented later, but it’s disappointing to see such a strong foundation cut off at the knees like this.

Supergiant has managed to create something fascinating with Pyre. There’s such a wide range of inspiration to its design that culminates in something really special. I just hope that at some point it is given the tools to live up to all that potential beyond a captivating story mode and become the great competitive game it has the potential to be.

Pyre’s battle system is excellent and delivers upon thrilling competitive play, but whether it has any future in that space could rest on whether it gets online play. 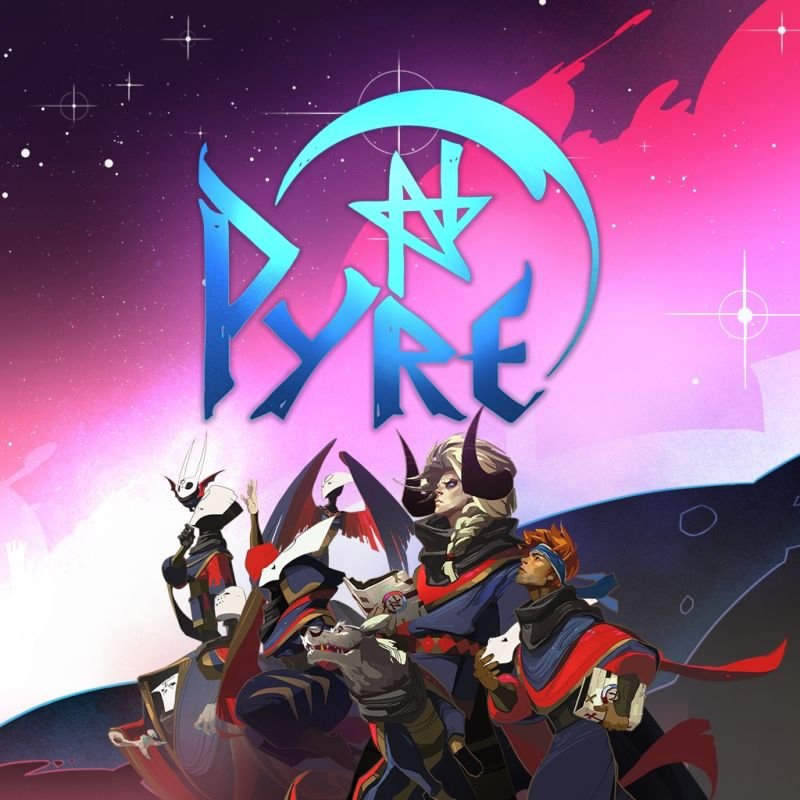