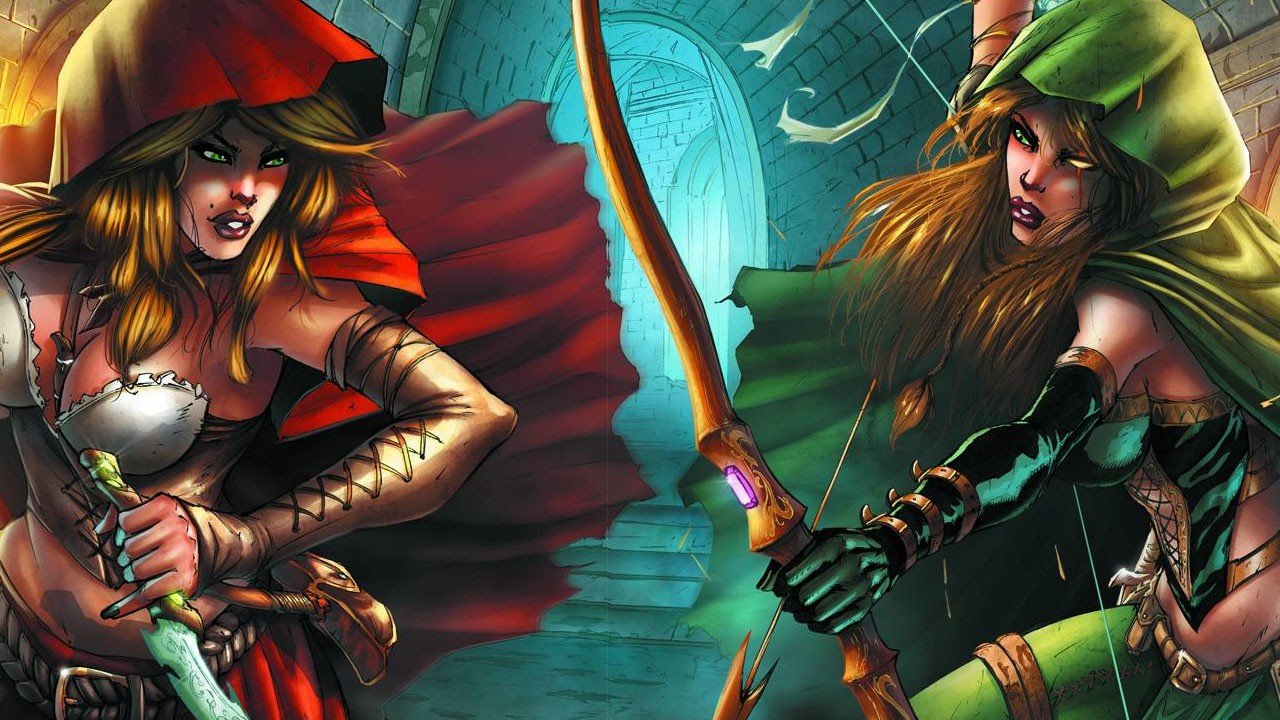 I try not to judge books by their cover but with Robyn Hood vs. Red Riding Hood’s unevenly drawn, scantily clad heroines battling on the cover of this one-shot, I had my doubts before I even flipped a page. Grimm Fairy Tales is a Zenescope staple, a collection of re-imagined fairy tale characters, heavily weighted towards super sexy female characters who also bring the violence in these modern retellings. Even ignoring the hyper-sexualization of these fabled characters, the art, redesign, and new origins simply did nothing for me. So, I am admittedly not the most unbiased person to review this book. That being said, I think that fans of this series will really enjoy Robyn Hood vs. Red Riding Hood.

It’s a decent enough setup for these two to battle, with Red Riding Hood deciding to track down Robyn Hood for her past misdeeds. No, not the rebellion that usurped King John’s throne in the Myst realm, it seems there were also some murders back here on Earth that Robyn is responsible for. I’m sure fans of Robyn know all about her motivations for these grisly killings, but new fans will also learn what happened by the end of this crossover. Pat Shand treads the line between laying the characters history out for readers and leaving mystery well, though both leads read very similar and their motivations and story are oversimplified. Shand spends time in the story with each heroine to give them some depth but there are not really any surprises in these women’s back-story. However, there are lots of action-packed panels to make up for it.

After a gratuitous costume change scene with Red, we meet Robyn and the action starts shortly thereafter. These two are evenly matched, so the fights are not one sided, although they can be confusing at times. Some panels cut too quickly from one pose to another: not usually a problem but in this case they are so different, it’s hard to tell what happened in between. Good action scenes are smooth and readers’ minds fill in any blanks that may exist. Struggling to figure out how one character escaped another’s grasp without any visual cues beforehand throws off the pacing of the book. It happened a few times in this issue, along with some clumsy looking sword fighting, so while there was a lot of action, it wasn’t always very well done.

Overall, this book brings no surprises to the Grimm Fairy Tales universe but I don’t think that was really the point. Having Robyn Hood and Red Riding Hood face off was obviously fan service, and it succeeds at that. If you’re a regular reader of this series, I think you’ll be satisfied. If you’re not, I doubt you’ll lose sleep if you pass on Robyn Hood vs. Red Riding Hood.