Ringu is one of Japan’s most well-known media exports, and for good reason—it’s a solid franchise. The first film is a cinematic masterpiece, the sequels are solid gateway horror flicks, and the original novels are some of Koji Suzuki’s best works. Yet despite villainess Sadako’s reputation carrying the franchise to widespread recognition, the franchise has fallen into disrepair in recent years. Sadako 3D was a lame, canon-destroying joke and its follow-up, while immensely entertaining, was cheesy and not for anyone but horror buffs. The series needed a kick in the pants, and as much as I loved them, all the crossovers with Hello Kitty in the world weren’t going to cut it. One can almost hear a cynical film executive trying to brainstorm. “Why doesn’t she just fight that girl from Ju-On? It’d be like Freddie vs Jason or something!” Lo and behold, Sadako vs Kayako was born.

This fun starts with the gleefully silly plot, which is split into two halves that eventually converge. In one, two high school students learn about a cursed video cassette, then proceed to accidentally buy a second-hand VCR that just so happens to have said cursed tape in it. In the other, a high school girl moves in next door to an allegedly haunted house. As the tape forces people who view it to kill themselves and as the house swallows up children, both parties end up coming together to try and put an end to the figureheads of each curse: Sadako and Kayako.

Sadako vs Kayako isn’t too concerned if you care about the logistics of the plot. Why does Tina Tamashiro’s character bother going into the house? Why does passing on the cursed tape only work sometimes? How does Sadako possess other characters, when she’s never actually been able to do that? The movie merely shrugs, then throws campy, bombastic, gory special effects at you in an endless pursuit to entertain and shock.

The thing is that works surprisingly well, and why that approach works here and not somewhere like, say, Doctor Strange, is that Sadako vs Kayako is an incredibly tongue-in-cheek film. Oddly placed humour, over-the-top gore, and exaggerated performances (including a fantastic slapstick turn from the talented Masanobu Ando) suggest that at no point was this film ever intended to be taken seriously. This is cemented by the fact that Koji Shiraishi was tapped for directing. His track record is full of deliriously gory and delightfully stupid horror films like Carved and Occult. From the get-go, his involvement should’ve tipped people off that the brooding days of Takashi Shimizu and Hideo Nakata are long over for these series.

Speaking as a longtime J-Horror fan, I think that’s for the best. Ju-On was never that great to begin with, being a slightly above average “me too” imitator trying to mimic Ringu’s smash-hit success. Meanwhile, Hideo Nakata’s exit from the Ringu series led to diminishing returns with each subsequent entry, with each new director trying and failing to recapture the first two films. Sadako vs Kayako, then, is the Jason Lives or Jason X of these two franchises—it throws all pretense of being brooding, mysterious, or creepy out the window, and instead throws a shock a second at viewers. It piles on the blood, the absurd plot twists, the hammy performances, self-aware humor, and everything but the kitchen sink just to ensure the audience has a good time. It’s a radical reinvention for both series, yes, but it’s a reinvention that works.

Most crucially, it’s a reinvention that I’m sure fans of either franchise are sure to love. Sure, it retcons both series’ canon to fit the plot, and yeah, it ain’t exactly high art. Yet it was never aiming to win any awards or be a faithful take on either series. It was aiming to be silly entertainment full of fan service from both franchises. Sadako vs Kayako, from the get-go, was intended to be a movie where somebody can get their head flattened from a headbutt, and where a ghost girl blows up another ghost girl’s head with psychic powers. In other words, a silly, gory bit of camp to shake up 2016’s fascination with dour, brooding blockbusters.

Sadako vs Kayako is a very stupid movie, but its self-aware willingness to be silly and have fun merit a recommendation for horror buffs. 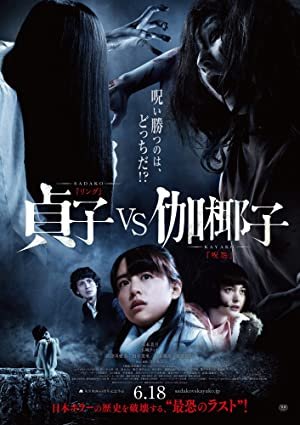