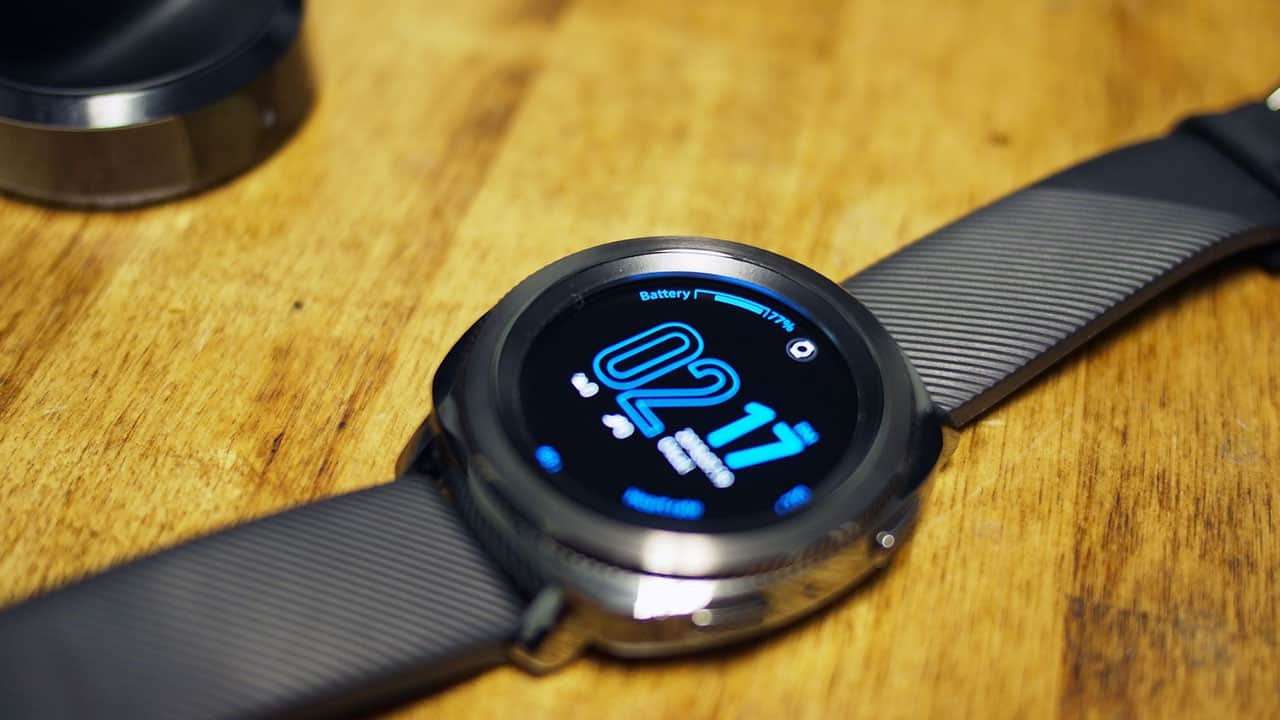 When the concept of the “smart watch” was first announced, I was right on board. The idea of having a Dick Tracy style two-way radio watch that I could use to make calls or take pictures excited me to no end and seemed like the proper step towards the future I was promised in Back to the Future II.

When I finally received my Galaxy Gear S2 Classic as a joint Christmas/Graduation gift, I was a bit disappointed to see it was not the one-in-all device I had hoped for, but rather a very convenient middle man between my phone and my hand. The Samsung Gear Sport is more or less the same, similar in both design and functionality; however unlike the S2 which was designed as a more well-rounded smartwatch, the Sport is definitely more a fitness tracker with a timepiece design.

Let’s start with the look. The Gear Sport mostly resembles the basic design of the S2, while being a bit more chunky and durable, sized at 42.9 x 44.6 x 11.6 mm—smaller than the S2 and S3 Classic but a bit bigger than the S2 Classic. It’s got a solid, metallic feel; the side buttons are a bit more rigid and stick out a bit making them easier to press, and the bezel feels much more precise. The 1.2 inch Super AMOLED screen is as crisp and bright as most Samsung watches. For a watch specifically targeted towards fitness, it’s great that the Sport feels as though as it’s built with what it’s meant to be put through in mind, particularly as the only Samsung watch that is totally waterproof up to 50 metres.

In terms of specs, the Gear Sport runs on the Tizen 3.0 OS—the current standard for Samsung wearables—with a Exynos 3520 1 GHz dual-core processor and 768MB of RAM. The Sport does have 4 GB of internal storage, which is only really useful for storing some of your favourite workout music, which itself is only really useful if you have a pair of Bluetooth headphones. Battery life on the Sport is pretty solid, rated at 300mAh, I found even with regular usage it could last from four to five days before needing a charge.

With the Gear Sport being focused on fitness and an active lifestyle, I decided the first thing I should do to test it was go for a jog. Much like the S2 Classic,it’s particularly good at detecting movement and intuitively beginning workout cycles, however, like the S2 Classic, it can be a bit spotty at times, ending workouts when you stop for a breather or a drink of water. I found the heart monitor on the Sport to be much more precise as well, being much more accurate in detecting your heartbeat and actively monitoring your heart rate without specific input.

The Gear Sport also offers a wide variety of Samsung Health app functions and widgets, allowing for a plethora of information to be displayed, ranging from steps walked, distance climbed, active time breakdowns, calories burned, water/caffeine consumption, and many others—although, this can be confusing for anyone looking for a centralized fitness record. Other options like a basic workout widget allows users to quickly track a run or a swim with the tap of an icon.

However, the one thing I found oddest was the lack of any kind of timer or stopwatch. This came standard in the Gear S2 Classic and you’d think for a watch so focused on fitness, these would be essential apps. Like its predecessors, the Gear Sport also allows for receiving and sending texts, although this can be a bit of a chore with the archaic simple text system—would it kill them to add T9 as a function?

The Gear Sport really isn’t a dramatic change from the S2 Classic, but with several older models of Samsung watches slowly disappearing from store shelves, this is a pretty serviceable entry point for anyone looking to buy a smartwatch. Since it runs on the Android platform, it has greater connectivity options across a variety of devices, and at $399 CND, it’s a bit more affordable than the S3 Classic/Frontier, currently priced at $469 CND.

The Gear Sport is an excellent companion for anyone looking to get more active, or currently living an active lifestyle. It’s as fashionable as it is functional; and while it doesn’t really expand on its predecessors, it doesn’t take any serious steps backwards. I might not take it over a more traditional timepiece-style smartwatch, but I’d definitely recommend it for anyone looking for a stylish fitness tracker.

The Gear Sport is a stylish way to stay fit, and a decent entry point into the smartwatch market.