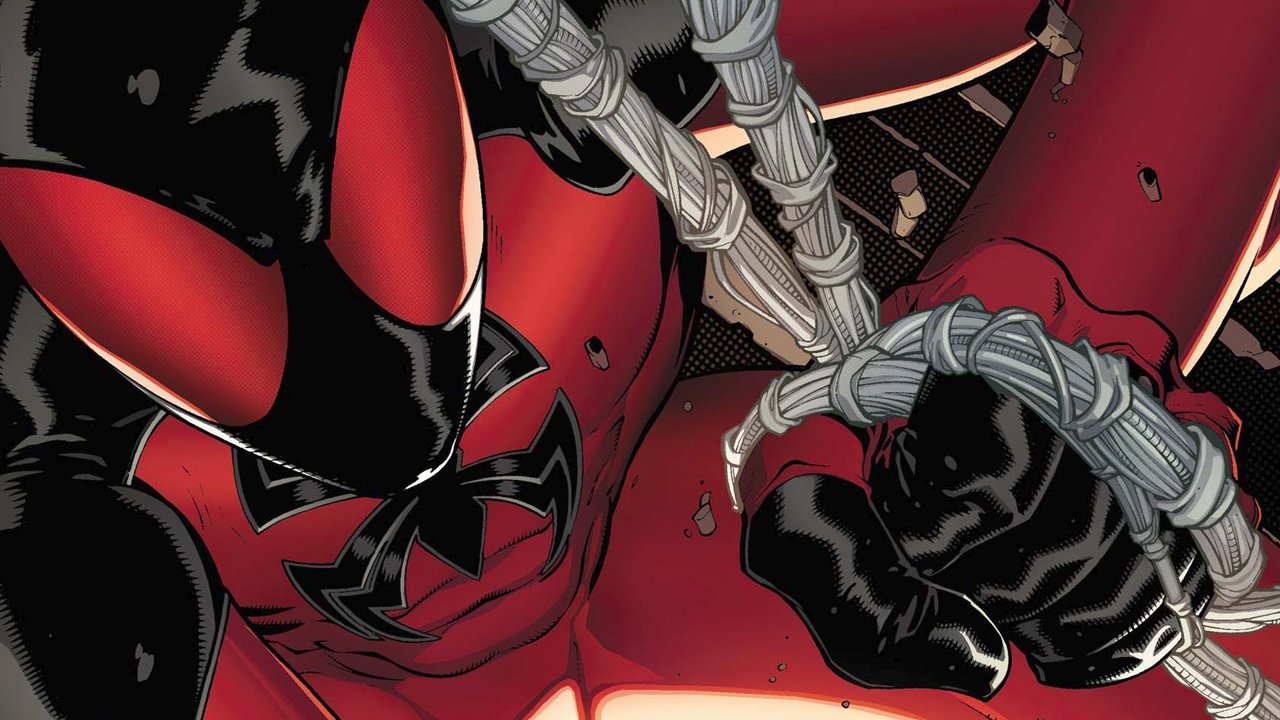 It’s been seventeen years since the last comic called Scarlet Spider was published by Marvel Comics, and oh what a different seventeen years makes.  Published during the height of the infamous Clone Saga, the title featured Ben Reilly, Peter Parker’s clone, struggling to take over protecting New York City, and ultimately deciding to retire the Scarlet Spider identity and take over the Spider-Man identity.

Now, seventeen years later, the wearer of the Scarlet Spider suit is still a clone of Peter Parker, but a dramatically different one.  Kaine, who was originally an antagonist during the Clone Saga, has recently made a variety of appearances in Amazing Spider-Man, and after the events of Spider-Island, Kaine has found himself a changed man.  Gone are his spider-sense (although it has not yet been explained how this happened), his scars and his cellular degeneration, and he’s left with a sense of confusion as to who he is and what he should do next, now that he isn’t living with a death sentence.  Under Yost’s pen Kaine is suffering an identity crisis, as he now has the chance and opportunity to be anything he wants, a choice he was never before given.

What makes this book so entertaining is that although Kaine might be the star of the book, Yost hasn’t lost sight of the fact that throughout his existence Kaine has been a very bad guy, and has done very bad things.  This series presents him with the tools to change that, to atone for his sins, yet allows the character to experience these changes in a very organic and well-paced way.  If you had told me a few years ago that Kaine would be headlining a Scarlet Spider ongoing series, I would have told you you were crazy, and yet this title, after just two issues, is already at the top of my reading list.  There’s an honesty in how Yost is approaching the character, and it makes the character much more nuanced as a result.  If you know the character and his history, this book is still faithful to the character he has been in the past, and if you’re a new reader, you’re brought up to date quite succinctly on who Kaine is, and you get a sense of the identity crisis that he’s currently experiencing.

Yost explores some new ground here as well by not having the story set in New York City.  Not only are there already a LOT of books centered there, but it wouldn’t make sense for a character like Kaine, and it wouldn’t afford the character room to grow.  Yost takes Kaine far away from New York City and Spider-Man, and instead places the character in Houston.  As such, there’s a different flavour to this book, and I really think it was a smart idea.  Kaine does end up facing off against a supervillain of sorts in this issue, but Yost elevates what could have been a standard fight-focused issue into something far more layered and textured, as Kaine works through some of his issues during his fight with The Salamander.  His reaction to being called a superhero is interesting as well, and plays into the whole concept of identity that Yost is playing with, and how Kaine sees himself, and will allow himself to be seen as.  Kaine’s interactions with bystanders, a doctor and a police officer show that Houston is a very different place from New York, which will affect how Kaine operates and evolves in future issues.

Stegman’s artwork in this issue is exquisite, as he manages to really bring the issue to life and make it pop.  The artwork is vibrant and quite fluid, as he captures the action and intensity of the issue perfectly.  He also proves himself capable of much more than that, when he depicts the quieter scenes in this issue.  The portrayal of Kaine himself is quite different from how it had been done in the past, which has all been explained via the story, what with Kaine’s scars having healed, his hair being cut quite short, and his beard shaved off completely.  It does distinguish him visually from Peter Parker, and thankfully his new look doesn’t rip off the old Ben Reilly design from when he was Spider-Man, as he had cut his hair short (relative to his long ‘90s grunge hair) and dyed it blonde.  The costume design is absolutely fantastic, although I wonder why the stealth suit has changed somewhat from when Kaine first left New York City after Spider-Island.  It’s a great design, very dynamic, and yet separate and distinct from Spider-Man himself.  It’s missing the blue hoodie, of course, but I’m happy that it hasn’t been shoehorned into this costume, as it just wouldn’t fit.  The only thing actually missing from this book is the name Scarlet Spider, as Kaine hasn’t yet gone by that moniker, nor had it foisted upon him by the news media (which is what happened to Ben Reilly when he first donned the costume).

This truly is a great time to be a Spider-Man fan, as Amazing Spider-Man is a consistent and enjoyable read each and every month, as well as the sister title Avenging Spider-Man, with ancillary titles Venom and Scarlet Spider proving to be quite enjoyable reads as well. Recommended

Final Thoughts
This truly is a great time to be a Spider-Man fan, as Amazing Spider-Man is a consistent and enjoyable read each and every month
More From CGMagazine