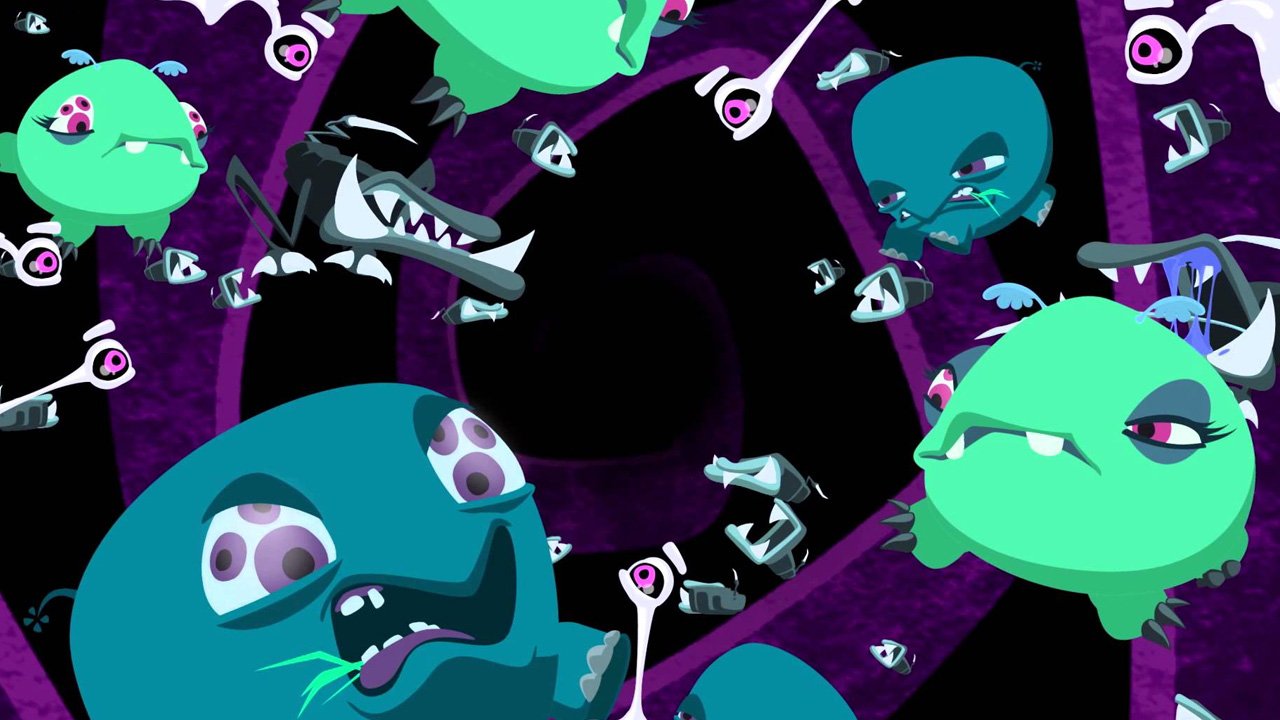 Side-scrolling platformers have always had some kind of puzzle element to them, but lately, puzzles seem to be the focal point for many of them. Schrödinger’s Cat and the Raiders of the Lost Quark is no exception. The platforming elements are completely tied into its puzzle system, so to appreciate the game, you’ll have to really love this one element of the game’s mechanics.
Schrödinger’s Cat places the player as the famous first cat of theoretical physics. The cat is brought in after a veritable catastrophe has hit the Particle Zoo, a strange vacation spot for the particles of the universe to see the strange and unusual sights of the subatomic world. The levels are a maze of obstacles that even the two-state cat can’t overcome by himself. So, to aid the cat in his journey through the zoo, there are cute and friendly little quarks scattered all over the levels.

Quarks come in four flavors and each has a special ability, but only in groups of three. So, three of one quark might create a temporary platform, while others will form a shield, let you rocket through rock, or helicopter upward. Of course, combining different quarks in combos of three leads to further abilities, and having a good memory about the combos is vital to getting through the game.

There are 14 different abilities to use throughout and the levels frequently task you with using them in quick succession. This makes many of the obstacles a frantic race to use the right quark combo as quickly as possible, because the effects are so short lived. This style of play also leads to a lot of potential frustration, especially since quarks can be in short supply as the game progresses.

Quarks will generally respawn after a while, but there’s an unforgiving nature to the platforming that will likely throw many players off. The bigger problem, however, is the linear nature of the levels. The lack of quarks in general puts off the desire to explore, but even if the maps were covered in them, there’s simply not much to do but just trudge ahead to get over the latest gap or deadly obstacle.
Another problem is that the game play just doesn’t vary that much. After a while, you’re simply doing the same things over and over, and it hurts the pacing. Granted, most games have this problem to some extent, but given the variety of moves available, there’s just not enough variety of problems to solve. You’ll end up using most of the same few combos through much of the game, and after a while, it felt as if the controls were getting in the way. Tapping the same three shoulder buttons over and over to do what became a basic move lost its appeal a few levels in.

There’s a fairly simple, but fun and colorful graphic style at work in Schrödinger’s Cat. The narrative plays mostly for laughs, with cartoonish characters, and the overall art style matches that perfectly. The humor, like most of the game, will either work for you or not. There’s an earnest attempt to be over-the-top and rather crude. The cat, in particular, is a snarky and obnoxious character who ends up rather annoying.

There are some clever uses of science jokes through the game though, which is a nice touch and adds a sort of nerdy appeal to the overall concept. Granted, actual science doesn’t have a huge impact on the game play itself beyond word play. The music is quirky and while the joke-laden dialogue itself might fall flat, the voice acting is certainly on par with an actual animated show.

Over the course of the 30+ levels, there are definitely some interesting sights to see and the game has moments where the mechanics come to together in interesting ways. Unfortunately, there are just not quite enough of these moments to keep a true forward momentum going the whole time. Schrödinger’s Cat and the Raiders of the Lost Quark is an interesting game overall, but a very flawed one.

Side-scrolling platformers have always had some kind of puzzle element to them, but lately, puzzles seem to be the focal point for many of them. Schrödinger’s Cat and the Raiders of the Lost Quark is no exception.