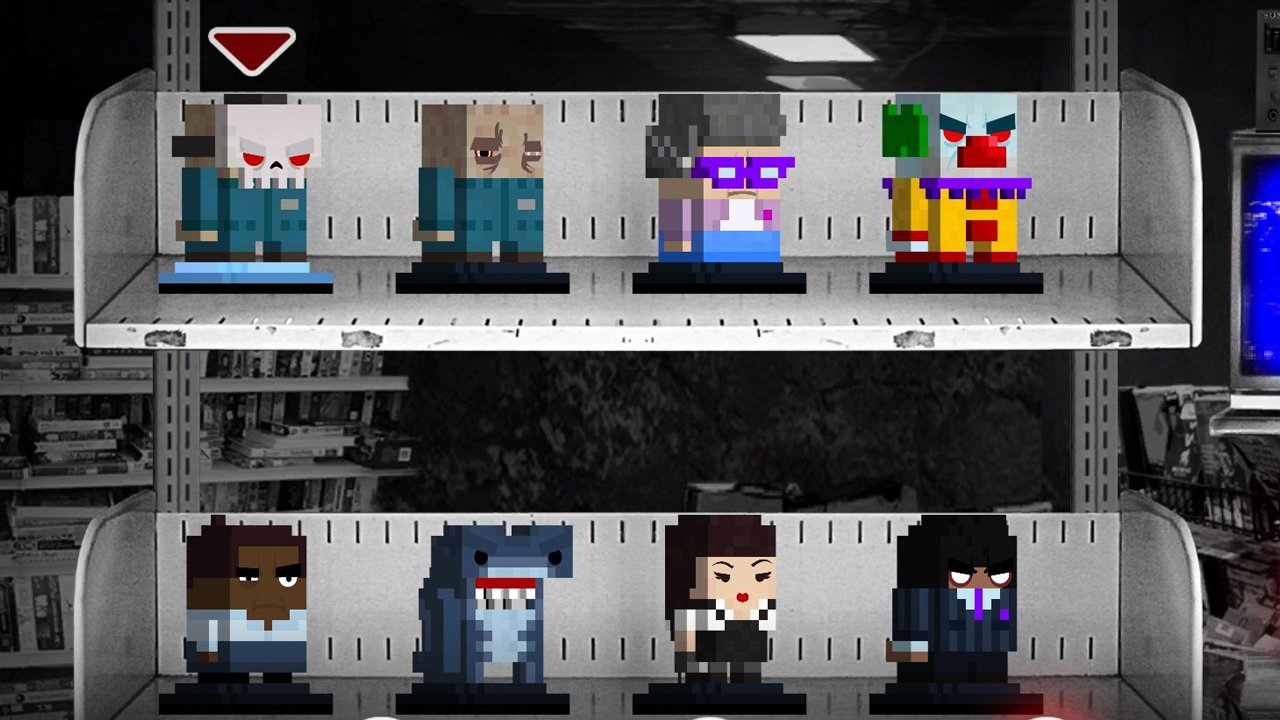 In this pixelated, 3D block-sliding puzzle game reminiscent of Minecraft, players take on the role of Skullface; a serial killer who is hell bent on killing every last teenager at Slayaway Camp. The player must move this lovechild of Jason Voorhees and Michael Myers around the grid and kill the drunk and drugged out teens. Lead them into traps and avoid the police until Skullface can take the portal back to hell and return for the sequels.

Even though Slayaway Camp rides the nostalgia train like a lot of other games and movies, it does so exceptionally well without being distracting or buggy. The game begins in a crappy video store where players will pop in a VHS to start the game. Cutscenes are shown in vertical hold style (where the tracking splits and runs up and down the screen) and the quality is fuzzy. For actual gameplay it cleans up. The player can even reverse their moves with the rewind button, restart the scene over again, and fast forward to get hints at a cost of some of the coins they earn. Each film has sixteen scenes (levels) to play through and for every film completed, another sequel appears on the shelf.

The VHS style for Slayaway Camp works because players get the full crappy effect without…actually being crappy. The developers utilized the effect in just the right places with the cutscenes and rewind options and even added movie trailer intros with a narrator. The game Power Drill Massacre had the same vertical hold effect in cutscenes and gameplay but the bad tracking made it difficult to see.

If you think block-sliding puzzles are easy, think again. I’m not that great with puzzles so sometimes I was left scratching my head despite having tried a hundred different movements. Targets move around the grid if they become frightened, which makes it harder for players to align themselves and get to the next step. Certain targets are even a nightmare to get to simply because of their positioning, especially if there’s a cop standing in the way. Some levels have multiple traps (like holes, fire pits and lakes of water) that are tempting to use but sometimes have to be avoided since they just won’t work in the long run. Some levels even limit how many moves can be made. Distractions—like the phone—can be used to get the target to move and bookshelves can be knocked over kill or add a new stopping point. Once players finally figure it out, they’re left with a sense of satisfaction rather than frustration or annoyance. Slayway Camp forces gamers to think outside the box and logically, which is nice to see in a game with such a simple concept.

Speaking of simple, the animation is just that, but it’s absolutely adorable. The little cube people move in quick and blocky ways, their faces are expressive and the gore will make players both laugh and wince in disgust. It’s clear a lot of work was put into the animation with the amount of unique death scenes. It actually took me a while before I saw the same scene twice. The death animations are incredibly over the top and ridiculous but in the best way, like Mortal Kombat, even with the narrator going “Fatality!” or “Sawed!” With the coins earned in each level, players can even buy new death animations and new serial killers.

The only problem I had with this game was that it was a little long and monotonous. Don’t get me wrong; if I were spending money on a game I’d rather have multiple hours of gameplay instead of one or two. But seeing as how Slayaway Camp is the same style puzzle, it got a little boring. Slayaway Camp isn’t the type of game to play through in one sitting, it’s something to boot up for an hour or two once in a while to exercise the brain and have a good laugh. That’s not to say it’s entirely monotonous, the amount of customization with killers and variety of deaths is more than enough to keep players entertained.

Aside from that, Slayaway Camp has everything gamers could want and more; proper use of retro formatting, amazing humour, good music, good voice acting, gory animations and buffet of variety. For slasher film fans that love a good jab at those movies, this is the best $9.99 you’ll spend this year on Steam.

Slayaway Camp hits checks all the boxes and will slash its way into your heart.