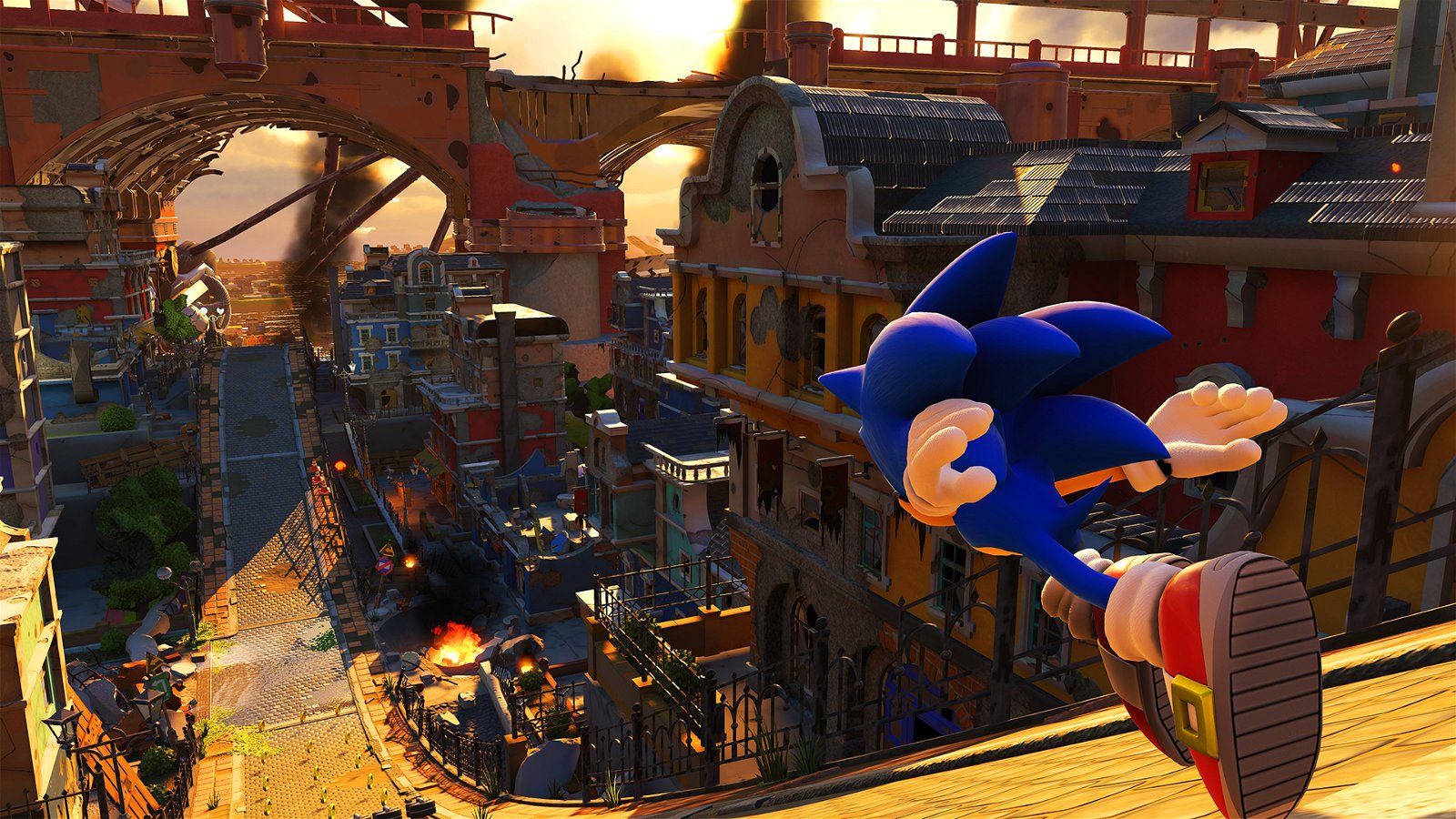 Despite grievances I’ve had with past Sonic games, I’ve mostly felt like I could at least count on it to deliver a coherent story and to make having a number of playable characters feel like variety rather than a jumbled disjointed mess. At times, Sonic Forces nails the sense of momentum and adrenaline I want in a way the series has only sparingly captured since its jump to 3D, but a lot of the time it’s as if it’s attempting to do too much at once, and fails to do so in a way that makes all its moving parts feel like a cohesive, enjoyable whole.

The beginning of Forces’ problems stem from a strange, tonal indecisiveness that runs through not only the game’s questionable presentation but bleeds into its level design as well. Sonic Forces begins with a rather dark setup: Eggman and a new, enigmatic villain named Infinite have succeeded in a plan to take over the world, with Sonic and his group of friends acting as a resistance against Eggman’s totalitarian rule. This means much of Forces plays out like a war story, with all of Sonic’s friends acting as generals in an uprising against Eggman and Infinite’s forces. It’s comically self-serious, but the series has been able to pull off darker stories in the past like Sonic Adventure 2, and had Forces committed to it the game might have been fine. After all, the voice performances are pretty good, with the cast having clearly gained familiarity of the roles after all these years, and it’s cheesy but eclectic soundtrack has a ton of great tracks I’ve been listening to outside of the game. However, Forces’ presentation is undermined by a few key decisions.

The majority of the story is told through visual novel style text windows and character portraits, rather than in cutscenes, the few of which there are seem stunted, hindered by stiff animation and reused assets to create crowds of citizens living under Eggman’s regime. Sonic Forces attempts to paint a picture of an oppressed society living under the rule of an evil, uncaring fear mongerer, but instead it comes off like shallow set dressing for all the levels that follow. Sonic stories are better when they’re on a smaller scale—such as Sonic Adventure 2—and Forces’ attempts at portraying a large scale war are shallow and half-baked. Critiquing a Sonic the Hedgehog game for a poorly presented story may seem harsh, but I’ve seen the series do better, and the angle of Sonic’s resistance appeared integral to the game’s marketing.

In the midst of all the uprising, Sonic Forces invokes some under-explained magic to bring Classic Sonic, a version of Sonic from the past who looks and plays akin to early Sonic games, back into the fold. Classic Sonic was a meaningful inclusion in Sonic Generations, which used both a modern and early version of the character to pay tribute to the series’ history, while his inclusion here feels like a gimmick to attract fans of early era Sonic. His levels use assets and mechanics similar to old Sonic games, such as item boxes and goal plates, and he plays just differently enough from modern Sonic to throw me off during his intrusive levels. Classic Sonic seems like a shoehorned addition to a game already struggling to maintain a cohesive identity, and by the time I finished Forces’ story I felt like nothing would have changed had he been scrapped from it entirely, except that I might not have been frustrated by his “just different enough to annoy” levels.

This frustration extended, albeit to a much lesser extent, to the level design for Forces’ addition of an Avatar, a custom character that acts as the third major playable character. The Avatar has the most options at their disposal in terms of abilities thanks to serviceable customization options. They can be one of several species, with different passive abilities depending on which you choose, as well as outfitted with different weapons and outfits. At the outset, the customization options seem limited, but I found myself unlocking a plethora of new weapons and accessories fairly quickly. It’s nothing groundbreaking, but it felt like a fun feature that helps differentiate Sonic Forces from other Sonic games. However, the Avatar’s levels and abilities suffer the same problem as Classic Sonic’s, in that they are similar but just different enough to make their incorporation feel superfluous. The speed and momentum that makes Sonic games fun is often broken up by the Avatar’s lack of certain speed-related abilities Sonic has, and it made playing as them less enjoyable and memorable than moments where I played as modern Sonic.

The only other playable character in Forces—Shadow the Hedgehog—is accessible through a free DLC called Episode Shadow. The prequel only lasts three short levels, but playing through them allows you to play as Shadow in certain modern Sonic levels. Relegating this to a DLC seemed like an odd choice, especially considering the story bits of these levels felt like an integral part of the story despite their shallow execution, but Shadow was the only character other than Sonic that I didn’t feel like I was having to adjust to small, arbitrary changes for.

Other Sonic games have required you to play as multiple characters before, but where Sonic Forces differs from games like Sonic Adventure 2 or Sonic Heroes is that its other characters don’t feel like variety, they feel like padding. Sonic Adventure 2 for example, felt like completely different games depending on who I was playing as, bringing in different mechanics and objectives, where Forces comes off like attempting to fit slightly different characters into a game built for one. It’s a shame, as for a third of the game, Sonic Forces is one of the most polished 3D Sonic experiences in a long time.

Modern Sonic’s levels are your standard 3D Sonic fare, and they manage to capture a sense of style, speed, and fluidity I came to Forces in search of. The stiff animations of the cutscenes are absent when Sonic’s finally in motion, and it always seemed like the tools were in place for me to keep my kinetic energy going as I effortlessly plowed through Eggman’s regime. Unfortunately, most of these levels lack the character and context that makes levels from past games like Sonic Adventure 2’s City Escape or Radical Highway memorable. Not unlike the story, much of the stages Sonic and company are running through are more sterile than is typical of past Sonic games, lacking in moments that made any of them stand out next to one another.

In certain areas Modern Sonic and the Avatar’s levels would switch to a sidescrolling perspective akin to Classic Sonic, which immediately felt more methodical and sluggish compared to the speed-oriented areas on a 3D plane. While the change in pace wasn’t exactly refreshing, they at the very least felt more purposeful than Classic Sonic’s sidescrolling.

My issues with Classic Sonic’s levels go back to problems I’ve had with early Sonic games for a long time. I’ve never found the speed-oriented platforming of Sonic entirely fitting for a sidescroller, as being unable to see directly where you’re going lends itself to running into unforeseen obstacles and enemies and being easily punished when the camera doesn’t keep up with the character. Classic Sonic’s levels in Forces fall pretty frequently into these pitfalls, and this, coupled with all my other problems with his inclusion made his segments easily my least favorite part of Sonic Forces.

As I reached Forces’ conclusion, my thoughts went quickly to Sonic Mania, the nostalgia-driven tribute to the series that came out earlier this year. Despite my issues with sidescrolling Sonic games I mentioned earlier, what I appreciate about Mania is that it’s a concise and focused game, with clear goals and philosophies behind its design. Forces feels like the antithesis of that, in that it’s a bloated, self-important mismatch of ideas with some great moments packed in between a lot of nonsense. Forces is fun to play in short bursts, but as an extended experience it feels like it has no idea what it wants to be, or is just incapable of encapsulating it all in one game.

A retail version of the game reviewed was purchased by the reviewer. You can find additional information about CGMagazine’s ethics and review policies and procedures here.

Sonic Forces has polish in some key places, but fails to bring that polish to every facet of its design.