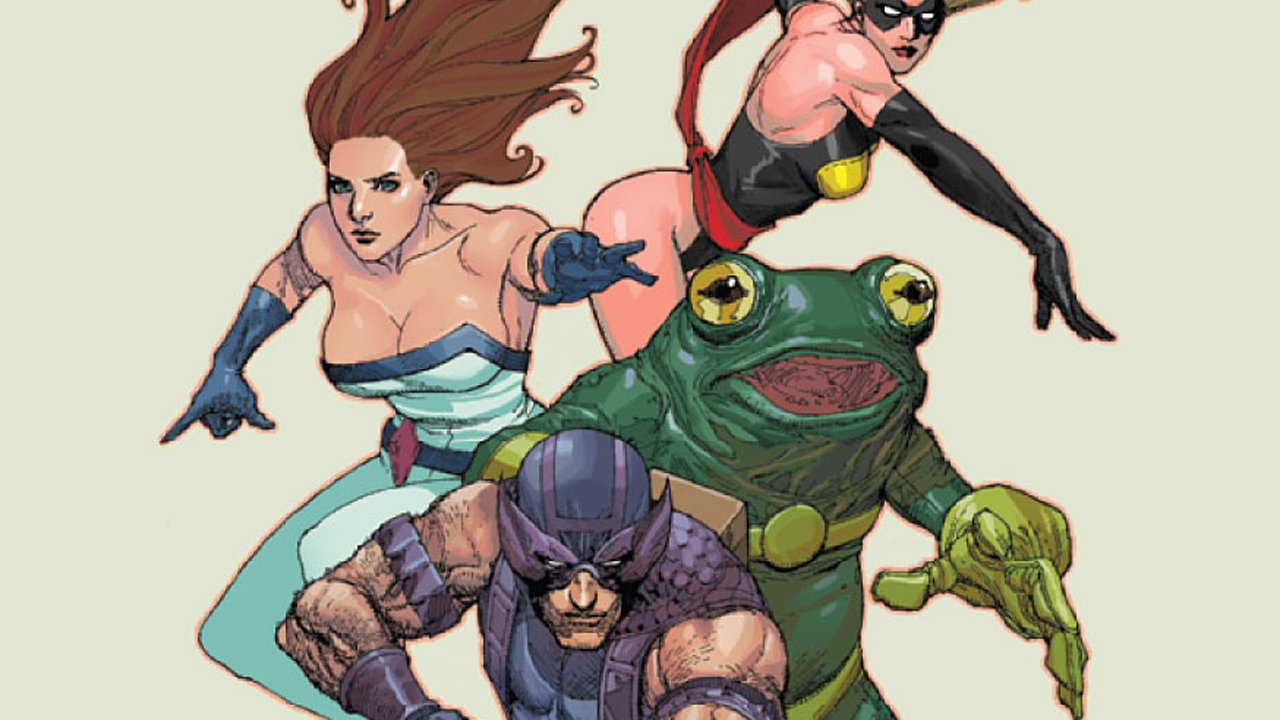 With Spider-Island running rampant, it makes sense to have a one-shot focusing on the Avengers handling this current epidemic of spider-powers going through New York City.  Now, if you’re looking for essential reading, or reading that is important to understanding this storyline better… this isn’t the book you’re looking for.  If you’re in the market for a fun light read, that’s not afraid to embrace the concept and also be a bit silly at times, this is the book for you.

But then, that much should be apparent from the cover, which puts together Jessica Jones, Ms. Marvel, Hawkeye and Frogman of all people.  As the infestation continues, members of Ultimatum realize that they also now have spider-powers.  So, in response, Flag-Smasher leads his group to the United Nations to try and kill some people with a bomb, but thankfully a contingent of Avengers are on-hand to put an end to their nefarious plans, but not without some help in the unlikely form of Frogman.  Frogman is rarely utilized these days, mostly because he’s kind of ludicrous, but Yost makes good use of him here as a foil for the rest of the Avengers.

The only part of the issue I really didn’t like was the portrayal of Hawkeye, as he’s far more seasoned and experienced than he’s shown to be here in this issue.  Maybe twenty-thirty years ago this would have been appropriate, but considering the teams he’s led, and how he was written while doing so, his portrayal here is a far-cry from being accurate or in-character.  That being said, the other characters play off of him nicely, as Clint deals with suddenly having spider-powers, in the middle of the Spider-Island crisis.

Frogman jumps onto the scene and steals the show, as he’s very engaging and fun to read, because although he’s normally a laughingstock, he isn’t treated as such here in the script.  He’s actually surprisingly competent, considering how he looks and acts, and it’s a nice juxtaposition.  The way he takes down Flag-Smasher is cheesy and silly, not to mention a little gross, but overall he is treated with a surprising amount of respect.

The artwork by McKone looks very good, and he cleanly and deftly handles the action-oriented parts of the piece, and also manages to infuse the book with a nice sense of humor in the artwork.  It’s at times very subtle, but it’s there and appreciated.

Overall, this one-shot is a fun little read, not overly important in the grand scheme of things, but then not every comic has to have earth-shaking consequences.  Sometimes, they can just be fun.

Overall, Spider-Island: Avengers 1 is a fun little read, not overly important in the grand scheme of things, but then not every comic has to have earth-shaking consequences.