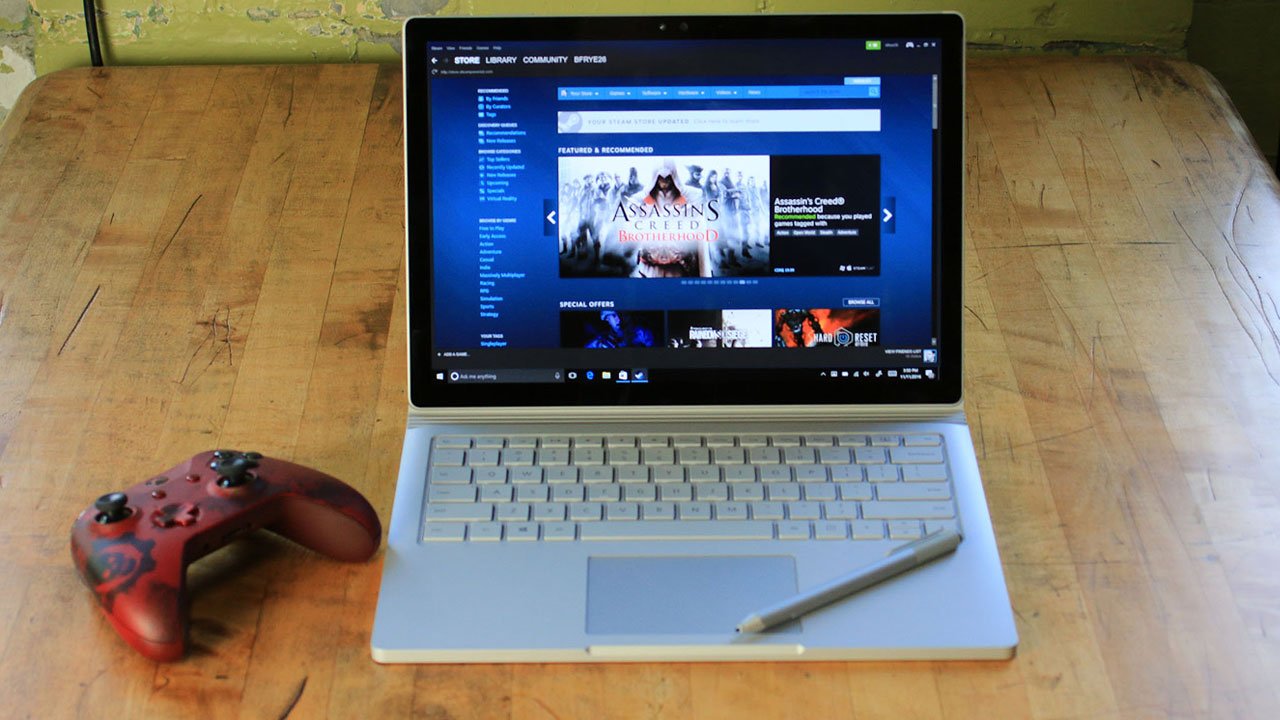 With the launch of Windows 10, Microsoft shifted away from a passive player with hardware, diving headfirst into making their own devices. This attention to delivering uniquely Windows experiences is evident in the Surface Book range of laptops. With its fall 2015 launch, the Surface Book gave us a good idea of what to expect from the flagship Windows laptop. Now with 2016 coming to an end, Microsoft has released an update to the line with the Surface Book with Performance Base. While not a true successor to the range, it still manages to be one of the most impressive laptops on the market, even if that power does come with a hefty price tag.

The Surface Book remains one of the more inventive 2-in-1 laptops currently available, even a year after release. The unique dynamic fulcrum hinge gives the notebook a new futuristic feel. Combine that with the silver magnesium body with beautiful, sharp lines and the Surface Books look straight out of a science fiction film. It’s a stunning 13.5 device that stands a testament of how new laptops should look.

The vibrant 3000×2000 display is completely removable with the simple press of a button, revealing one of the most powerful tablets currently on the market. The 13.5-inch size makes it a great note taking machine, with the help of the included stylus pen.

The real excitement happens when you drop the screen into the dock. This base is much more than a simple keyboard – it allows the real power of this laptop to be unleashed. Packing a NVIDIA GeForce 965M with 2GB, and an extended battery that will extend the life up to 16 total hours. The base gives the system access to power performance users crave. The fact Microsoft was able to pack this all into a form factor that is only marginally heavier than last years model is impressive (3.7 lbs vs. 3.5 lbs).

The model tested was the fully loaded $3,300 rig. This computer comes packed with a high-end I7 CPU, 16GB Ram, 1TB SSD, and the aforementioned Nvidia 965M dedicated graphics chip. This notebook is no slouch, even running multiple tabs, working with Adobe Photoshop and Adobe Premier, there was no noticeable slowdown. The Surface Book hummed along taking every program we could throw at it.

With all this horsepower, the Surface Book with Performance Base can run games, and in some cases, very well. It will not replace a dedicated gaming rig, or a modern gaming laptop working with the latest and greatest from the Nvidia 1000 series, but if you are a game player on the go and only have this, you should be able to enjoy even some of the most recent titles.

In our tests, we tried it all, the latest titles from Microsoft first party studios including Forza Horizon 3, Gears of War 4, along with titles such as Civilization VI, Overwatch and Diablo 3. Forza Horizon 3 was the worst of the lot, even with the graphics turned way down and running at 1080P, the Surface Book could not manage to achieve a playable framerate. Gears of War 4, on the other hand, worked surprisingly well. With native resolution running on medium setting and V-Sync off, the Surface Book managed to get a very playable framerate at around 30FPS. It did not look as good as you would see on a well-equipped gaming desktop or even the Xbox One,  but it was very playable. I even managed to get some Multiplayer in a while testing the laptop and saw no issues during high intensity gaming sessions.

Civilization VI, as expected, ran as any player would hope. With all settings turned up, running at native resolution, the Surface Book showed no lag or stuttering. The game was a pleasure to play, and with the added touch screen features, was a real joy to play on with the Surface Book. The same can be said for Overwatch and Diablo 3, while both can run well on relatively modest hardware, The Surface Book with performance Base managed over 75FPS at 1920 x 1200, and Diablo 3 maintained an impressive framerate at max settings at native resolution in crowded areas.

Overall the Surface Book surpassed all my gaming expectations. It is an ultraportable 2-in-1 that any gaming enthusiast can use, and not regret. It will not replace that beefy gaming laptop anytime soon, but it also is far more portable for a long trip.

Looking at the 3DMark’s Cloud Gate benchmark we see the Surface Book with Performance Base achieve an impressive score of over 8800. In the more intensive Skydiving test, it squeaked out at over 10,000. Those numbers put it above most gaming laptops from 3-4 years ago, and even above many every day bigger laptops from 2016. There is no denying, the Surface Book with Performance Base is a beast of a machine wrapped in a very stylish package. While it won’t have any chance of running VR on either the Oculus Rift or the HTC Vive, it is hard to expect a laptop in this class to come close to the specs for VR, especially without producing significantly more heat.

With all its features, the Surface Book would be wasted if it was not enjoyable to use. Thankfully, Microsoft managed to make one of the most comfortable laptops I have ever tested. The keyboard has the perfect level of feedback and travel to make every keystroke satisfying. The glass touchpad is also best in class. Many Windows laptops drop the ball when it comes to the touchpad, making them nearly unusable. Microsoft has managed, by some miracle, to make a touchpad that feels as good as a Mac trackpad, and that is saying something. All touch gestures work as expected, and the size works perfectly on the small form factor device.

The 16-hour battery life that Microsoft boasts, while possible, is not the norm. If you are doing any possessor intensive computing, the Surface Book with Performance Base will archive around 10 hours, and that number could drop to around five if you start any rendering in Premiere. While not the near mythic levels of battery that Microsoft advertises, you should have little issues running the Surface Book in a normal days use without a charger. If you are going on a trip, bring a charger with you, but the peace of mind knowing your laptop will last you through the day is a great feeling.

Microsoft has opted to not drop all standard USB ports and SD Card readers in favour the newer USB type C standard, and that is fine by me. It was refreshing to be able to use the Surface Book for field work and be able to use it with a range of devices without the need for dongles or adapters. All standard cables plugged into the 2 USB 3 Ports on the side, and the SD card, as always, was an invaluable tool to have when taking photos.  The magnetic charging cable was also a welcome sight. I have broken many a laptop by tripping on the charging cable, so the fact I have one less thing to worry about is a relief.

At over $3000 this is not a small investment and something that may set it out of reach of many would-be buyers. But if you have the funds to spend, the Surface Book with Performance Base is a great laptop.  It is the flagship device Microsoft needed, and it is one that any Windows fan should keep in mind this holiday season. Yes, there are cheaper laptops that can do most of what the Surface Book with Performance Base can do, but few look or feel so good doing them.

If you have the funds to spend, the Surface Book with Performance Base is a great laptop.