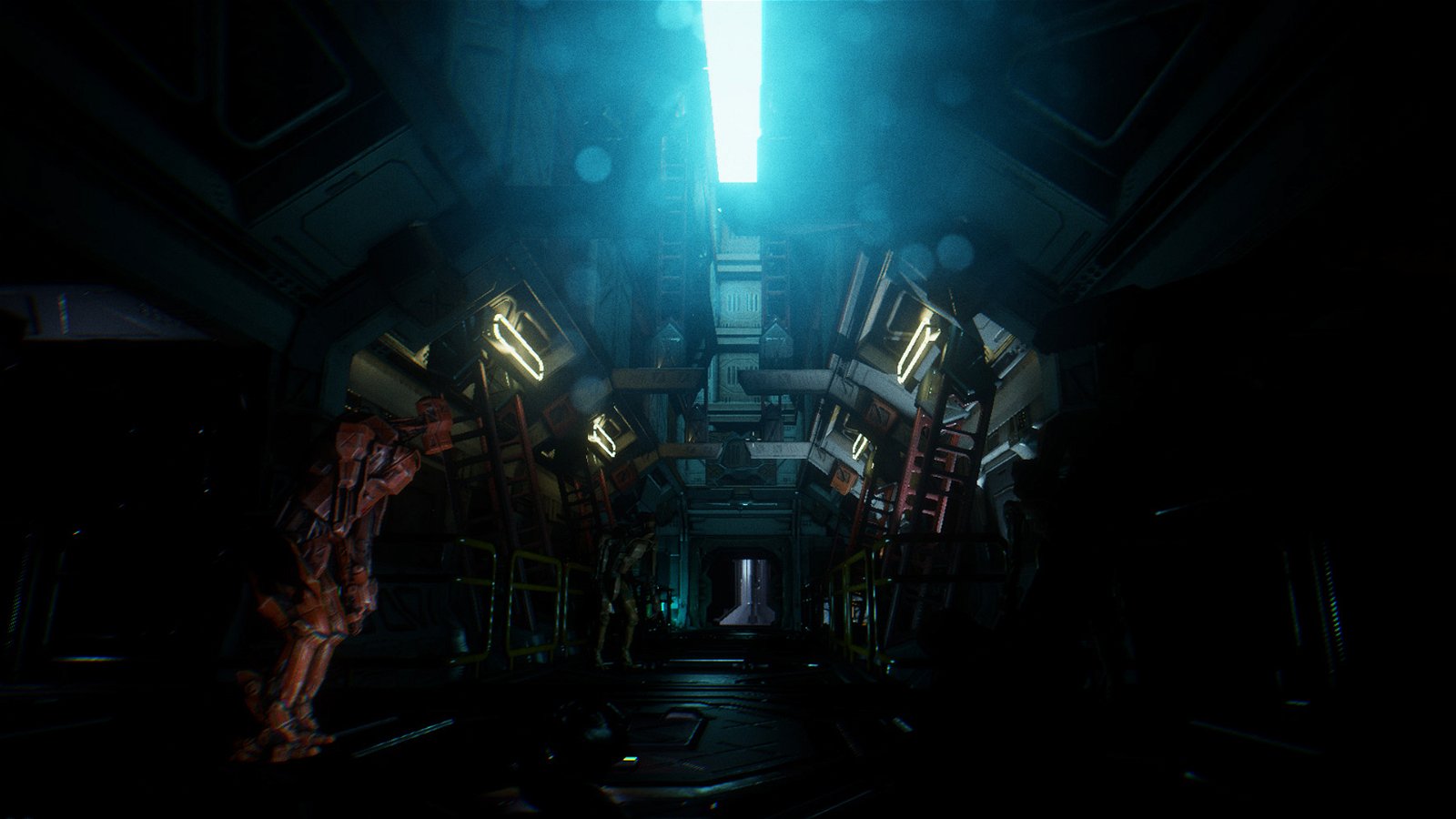 Syndrome is the videogame embodiment of the old adage “a camel is a horse designed by committee”. It’s the latest game from the indie studio Camel 101 that has the player waking up to discover they are trapped aboard a spacecraft in the wake an event that’s left all but a few of its crew and guests as corpses. Things start off in high gear with the ship’s computer warning of an imminent solar flare, requiring the player to lower the blast shutters to protect the ship. Unfortunately, from this initial cue onwards, the game falls off the rails, leaving the player to stumble awkwardly through a mostly-inhabited ship featuring ineffectual jump-scares, cumbersome combat with choppy enemies, and a health and inventory system AND a limited-resources shooter wedged in for added convolution. All of this is further burdened by a desperately lacking save system that often forces the player to re-play an hour of content at a time if they die or need to exit the game.

I like a punishing gameplay experience as much as the next player (in fact, probably more than most), but I like it to be in a way that presents an interesting challenge for me to overcome. Forcing a player to play through extended sections without the opportunity to save and exit and  adding janky enemies around a save location isn’t adding challenge to a game; it’s just crummy design choice. I’ve played 700 hours of Path of Exile in hardcore mode since September and have little more than an army of dead characters to show for it, so it’s with no lack of context or appreciation that I say that Syndrome is tedious in an unfair and particularly un-engaging sort of way. I like the world in a nostalgic System Shock sort of way, but there’s just not enough going on. Where the source material offers a claustrophobic environment that always feels threatening, even when it’s not, Syndrome instead offers a lifeless space that (largely due to the camera perspective alone, which is at the player’s waist for some inexplicable reason) feels exceptionally open and empty. Unfortunately, it’s not in a spooky sort of way, and instead leaves the whole experience feeling dull and uninspired.

There was clearly a lot of attention given to the creation of the ship and its interior, but too much of the experience feels like a walking simulator with out-of-place jump scares and clinical enemies shoehorned into it. Pair the whole ordeal with a lighting renderer that often destroys the atmosphere and audio samples that range from highly compressed to downright mismatched, and the whole experience begins to feel more than a little tedious. The one consistent saving grace is the ambient audio. With the game’s lack of music, the ambient effects are particularly effective at grabbing one’s attention. The unfortunate flip side is that enemies themselves rarely have the same effect.

And while I’m on the subject of tedium, when the player wakes up in a disaster situation to have the first bit of dialogue be a cliché “don’t trust anyone, but help us” speech, followed later by a “those guys were lying, don’t trust them… help us instead” speech, players are stuck delivering one of two horribly-predictable outcomes, or the third (even worse) offender, which takes the form of the “M. Night Shyamalan, bet you didn’t see that coming because it has literally nothing to do with the plot” ending. I don’t like to crap on anyone’s hard work, but it’s hard to shake the feeling that the whole project became muddied by an idea box filled with suggestions from eight-year-olds listing off all of their favourite Let’s Plays that included a laundry list of survival-horror titles, first-person adventures, classic sci-fi horror, and something involving inventory management, because that’s “in” this season.

On a personal note: If your game’s going to feature a sledgehammer on a table, you better let me Serious Sam some stuff.

I don’t mean to be down on the whole thing; there are some bits about the game that worked for me. Aside from being a good looking game (not groundbreaking), the ship has a real feeling of tangible design to it—like something built by real people, not just to drive the plot. In a lot of ways, though, that stings even more. It’s easy to dust one’s hands of an all-around terrible game, but when one shows promise that’s let down by convoluted, overly ambitious design choices, it seems to hurt that much more. There are definitely moments where the atmosphere does work, but they feel more like keynotes that are strategically placed for effect rather than the game having a prevailing feeling of fear. There’s certainly something to Syndrome, but I keep coming back to this terrible feeling that it’s more from a love for the properties it draws its inspiration from than anything that Syndrome itself does. It gets difficult to recommend considering that last year’s SOMA is only $5 more; or, for the shooter fans, the Dead Space games that also ring in for less.

There’s clearly a lot of homage to the classics here, but there’s too much addition for addition’s sake, which unnecessarily detracts from the experience. It’s a tragedy; I really wanted to like Syndrome for what it’s trying to do, but where Syndrome should have been a love letter to classic sci-fi horror games, it instead feels like a drunken, rambling text sent at three in the morning.

Where Syndrome should have been a love letter to classic sci-fi horror games, it instead feels like a drunken, rambling text sent at three in the morning.