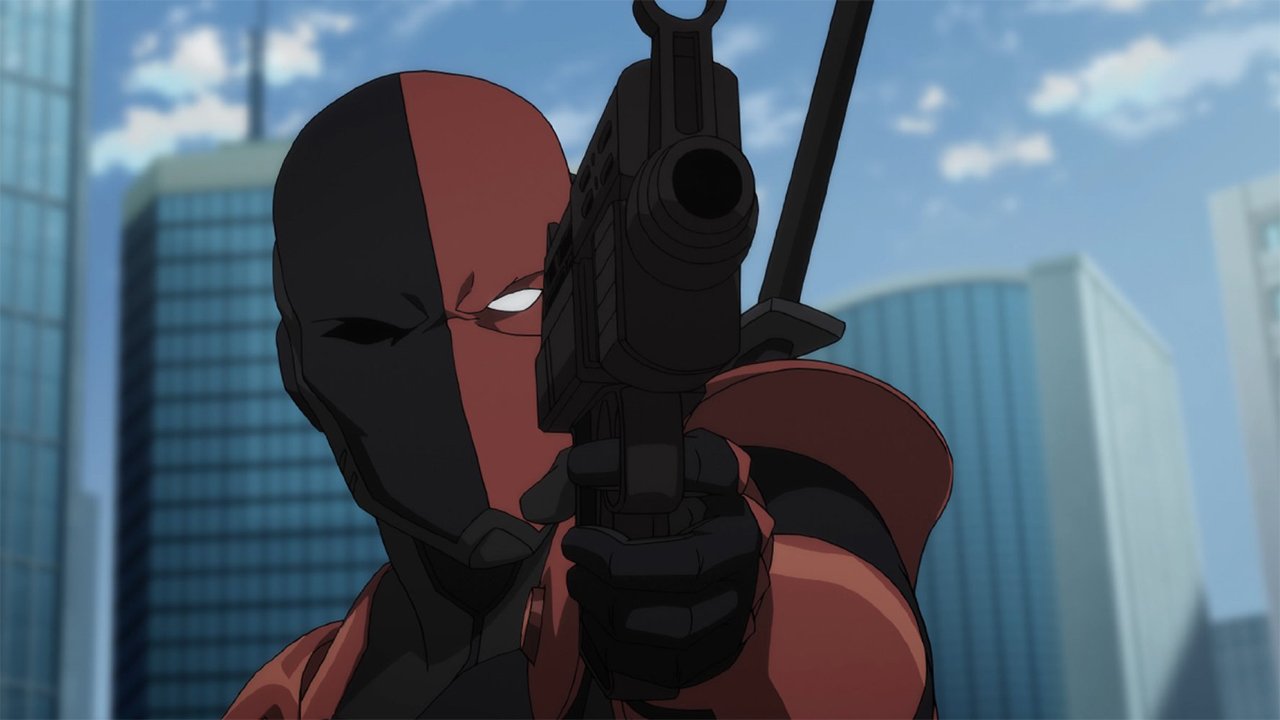 Well, it’s been a few months, so it’s time for another DC animated feature. Unsurprisingly, it takes place in the Batman universe (you know, like 95 per cent of these movies), but for a shift in pace it’s a Teen Titans adventure without a single appearance from the Caped Crusader himself. So hey, that’s something right? The story is both a sequel to Justice League vs Teen Titans and an adaptation of one of the more famous tales of Teen Titans lore (which introduced some pretty important characters to DC continuity, so it’s kind of a big deal). Given all of the characters involved along with the twin goals of adapting a classic narrative and furthering DC’s direct-to-video animated continuity, the movie is predictably overloaded with content and feels a bit rushed and insubstantial. This isn’t one of the best of more ambitious features that the good folks at DC Animation have cranked out over the past decade, but it is undeniably goofy fun if you give yourself over the charming combination of psychedelic silliness and 80s action cheese. Fun stuff for sure, just not exactly deep.

So, all the Teen Titans from the last movie return—Robin (Stuart Allan), Nightwing (Sean Maher), Raven (Taissa Farmiga), Beast Boy (Brandon Soo Hoo), Blue Beetle (Jake T. Austin), and Starfire (Kari Wahlgreen)—plus the new character named Terra (voiced by Christina Ricci). As can be guaranteed by a hero list that sprawling, the plot can be a bit of a mess. There are two villains. Brother Blodd (Gregg Henry) is obsessed with draining the Titans of their power to turn himself into a god, while Deathstroke (the late great Miguel Ferrer in what was tragically his final performance) shows up for his own reasons not worth mentioning for the sake of spoilers. Obviously that’s pretty stressful stuff for the group, but these teens also have lives filled with angst! So, there are also subplots involving Blue Beetle’s isolation from his family, Nightwing/Starfire burgeoning relationship, and demons of the new Terra’s past that will soon come to the forefront, plus her own little love triangle. Whew! That’s a lot narrative for an 84-minute feature, and it sure feels like it.

Justice League: The Judas Contract comic was a year-long plot that was adapted liberally here. Essentially, the focus is a plot involving Terra and Deathstroke and it’s handled quite well. There’s a very icky aspect to their relationship that most might be able to surmise without knowing the story. It has at least been toned down mildly, which is a plus. But the discomfort remains, in good ways and bad.  Terra is without a doubt the most interesting character in the film, tragic, twisted, and misunderstood. The way she fits into her new superhero team works in wonderfully unsettling ways, her past is fascinatingly dark, and Christina Ricci is absolutely fantastic in an equally wounded and wicked vocal performance (and her relationship with Beast Boy can be downright heartbreaking). Deathstroke is a bit more of a mixed bag. Ferrer is spectacularly sinister in how he works his villainous vocal tones, but the way his backstory has been twisted into the League of Shadows for the continuity of these DC Animated flicks limits his characterization significantly.

The story around the main conflict isn’t quite as strong though. While it’s a nice twist that Starfire is head honcho of the team, she’s also a bit of a boring Leonardo leader with little character beyond giving marching orders (and her relationship with Nightwing is the stuff of cornball teen soaps, not inappropriate in context, but not exactly thrilling either). Everyone else is essentially limited to a one-liner factory between action scenes, and the jokes aren’t exactly brilliant. Much like the recent Justice League Dark feature, there’s an undeniable sense that the focus of telling superhero team stories in these DCU features is both a blessing and a curse. On the plus side, fans get to see a variety of characters brought to light who they would never have assumed would make it beyond the page. On the downside, none of them get much depth since there’s so little screen time to go around amongst the ensemble (Hell, even Kevin Smith gets a cameo as a, wait for it, podcast host in a hockey jersey named Kevin Smith). You can’t help but wish these features could be dedicated more to individual characters where they could be explored with the care that they deserve. But then again, that wouldn’t check as many boxes and appeal to as many niche fans for impulse buys.

Oh well. On the plus side the animation is a strong as always. The house style pitched halfway between anime and Bruce Timm has really grown on me over the years, and it suits these stories well. Long-time DC animation director Sam Liu (Batman: Year One, All-Star Superman, The Killing Joke) directs action scenes with a kinetic flair that’s hard to resist. The film has a constant, pulsing momentum leaping from one set piece to the next and keeping everything bright and poppy (without ever neglecting or undercutting the darkest aspects of the original tale). The one-liners and teen melodrama might feel a bit too corny for some (myself whole-heartedly included), but it’s certainly true to the source material and finds a nice balance between B-movie bliss and soap opera cheese. The Judas Contract isn’t the deepest or most ambitious DC animated feature to date, but it is a pretty damn entertaining bit of goofy pop with a dark core and that’s really all you can ask from this sort of thing. It could have been far worse. It could have been the instantly forgettable Teen Titans vs. Justice League (zing!), so at least the movie is a hefty improvement over its predecessor. That’s something, right?

As always, Teen Titans: The Judas Contract looks and sounds incredible on Blu-ray. The colours pop off the screen and details remain rich no matter how kinetic the action scene. The soundtrack booms (both the music and effects) on a level that many theatrical features can’t even match. It plays like a big superhero epic on a proper home theater setup and there’s no denying that fans definitely get good bang for their buck with these DC Animated features on Blu-ray. It’s just a shame that not all of the stories can live up to the tech specs.

The special features kick off with an absolutely delightful feature that these releases could use more of.  Since Teen Titans: The Judas Contract was one of the more beloved Teen Titans runs of all time, DC brought together the original creators writer Marv Wolfman and artist George Perez. The joy the two old friends have being reunited is palpable, and through a shared conversation and separate interviews, they dive into all the nuts and bolts of their collaboration, the foundation of The New Teen Titans, and the creation of the Judas Contract in particular. It’s a wonderful look at how comic books are conceived, designed and endure from two underrated masters of the medium. It’s the sort of exploration of comic history, form, and creation that fans could use more of. These guys have rarely been filmed discussing their craft and by the end, I felt hungry for more. There have been other DCU discs that treated creators with the same respect (especially Grant Morrison’s many ruminations on the All-Star Superman release), but few this good and hopefully this will be far from the last time this happens.

So, that 25-minute feature is undoubtedly the highlight of the disc, but thankfully it’s not the only special feature. Next up comes a ten-minute exploration of Deathstroke (who was introduced to the DCU a way back in the original Judas Contract). Wolfman and Perez return to chat up their vision of the character and how he fit into their Teen Titans arc, along with one of the heads of the DC animated films to discuss the character in more general terms. It feels more like a long excerpt from the Wolfman/Perez interview than anything else. Just a quick chat up of Deathstorke that will be of more interest to folks who never encountered the character before than the long-time comic book fans that this disc is aimed at. Rounding out the disc are two episodes of the Teen Titans animated series loosely connected to this story, trailers for a few past DC animated features, and a preview of the upcoming DC film Batman And Harley Quinn that is sure to get fans of the old Batman Animated Series plenty of nostalgia goosebumps – the art style is straight out of the second strain The Batman Animated Series, Bruce Timm is all over it, and quite frankly it looks like a long deserved return to one of the most beloved incarnations of Batman of all time and I couldn’t be more excited. It just feels right. Only time will tell if they messed it up, and if the fact that Quinn creators Arleen Sorkin and Paul Dini weren’t involved is a bad sign.

So in other words, this is another winner from DC Animation. Even if The Judas Contract isn’t exactly their finest hour, these folks know how to serve up superhero geeky goodness and the DC animated features continue to be inexplicably more satisfying than their live action counterparts.

The latest DC animated feature revives an old Teen Titans comic for one of the more enjoyable outings of this particular corner of the DCU. 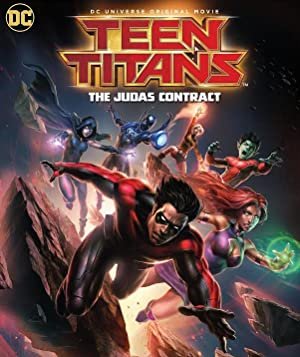