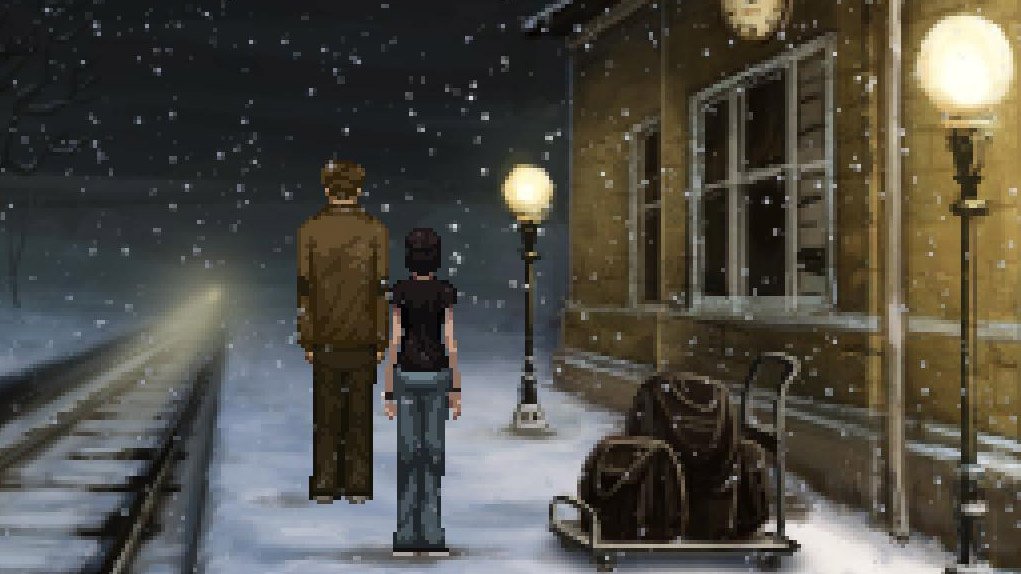 The Charnel House Trilogy reminded me of one of those classic sideshow gaffes. A banner proclaimed that a “100 pound man eating chicken!” was on display inside the tent. The first few carnival-goers pay their money to see this marvel, only to discover a smallish man sitting on a stool, eating fried chicken. The poster is technically accurate, but it’s still misleading. The attendees then become part of the joke, and trick their friends into also being suckered out of their money. It’s a collective social experiment that enriches the carnival owner which only works if everyone stays complicit in the prank.

In this case the carnival owner is developer Owl Cave. The ringmaster is Jim Sterling, who has been the biggest promoter of this particular title… he also voices a major character in the game.
The Charnel House Trilogy advertises itself as “one fateful night aboard a train bound for Augur Peak. Three thrilling, horrifying adventure games in one.” Unfortunately there’s about one decent, albeit brief, adventure game involved in this three-pack. The rest is an emo tale of people who create their own problems, then whine about them a lot.

The Charnel House Trilogy is a point-and-click adventure game, but there’s absolutely zero reason that it’s divided into three parts. Furthermore, the only real horror involved is that people this shallow exist in real life. Protip: If anyone has a copy of Atlas Shrugged in a bookshelf for any reason other than a school assignment, run away as quickly as you can. If they own the book and claim it’s only because of Bioshock, find a way to run faster.

After a preliminary puzzle that involves cramming a miniature dog’s ass into an improbable place – oh God I wish I was kidding – the puzzles end, replaced by a lot of walking back and forth on a train while the game essentially gives you step by step instructions for what to do next. The game fakes out the player by introducing a de-facto female protagonist – Alex Davenport – who bows out in the second act so that all the truly interesting things can happen to a patch-elbowed British professor type named Harold Lang. That would be fine if Harold and Alex’s stories ever meaningfully tied together, but they don’t. On the bright side, Harold is 100% less emo than Alex, therefore I actually care when things start going sideways for him.

Alex comes off as a forced character.  I’m tired of “nerd girl” being synonymous with unnaturally dyed hair, a hipster lifestyle, and goth crossover fashion.  No matter how deep her drama goes, it comes across as the emotional equivalent of a hangnail. Furthermore, the first act spends too much time on Alex moping over her ex-boyfriend and not enough time on the fact that she’s being stalked. Strangely, the game refers to the menacing calls as “nuisance phone calls”, but when you actually hear them it seems the police probably should have been involved.  Break ups are bad, sure, but stalking is usually a more immediate priority.  In The Charnel House Trilogy, however, it’s little more than an aside until the third act, where the surprise plot twist isn’t much of a surprise.

The game is so scattered that it even manages to overcomplicate the weather. The first thing we’re told in game is that there’s a blizzard. That changes to a major rain storm shortly after we’re introduced to the t-shirt-wearing main character. This flips back to snow while Alex is waiting for the train, but strangely she’s still wearing the t-shirt. Later, she complains that she’ll freeze to death if she even opens a window. Issues like this break the “psychological horror” spell because the waffling is hysterically distracting.
Presentation problems in the game sink deeper, however, as the characters’ internal monologues overwhelm an understanding of video games as a distinct art form. At one point, a portrait is covered up by words describing that portrait. There was no need for a wall of text explaining that it’s a portrait of a woman looking off in the distance because we could see that for ourselves if the text wasn’t in the way! Like many indie games, The Charnel House has too many moments where it’s far too impressed with its own pompous gasbaggery to tell a truly meaningful or fun story in the time it has. The problem isn’t that it’s short. The problem is that it’s ultimately empty.

The Charnel House Trilogy is a point-and-click adventure game, but there's absolutely zero reason that it's divided into three parts.