The Godfather: A New Don (Boardgame) Review – An Intriguing Game Of Chance, Strategy, and Poor Choices 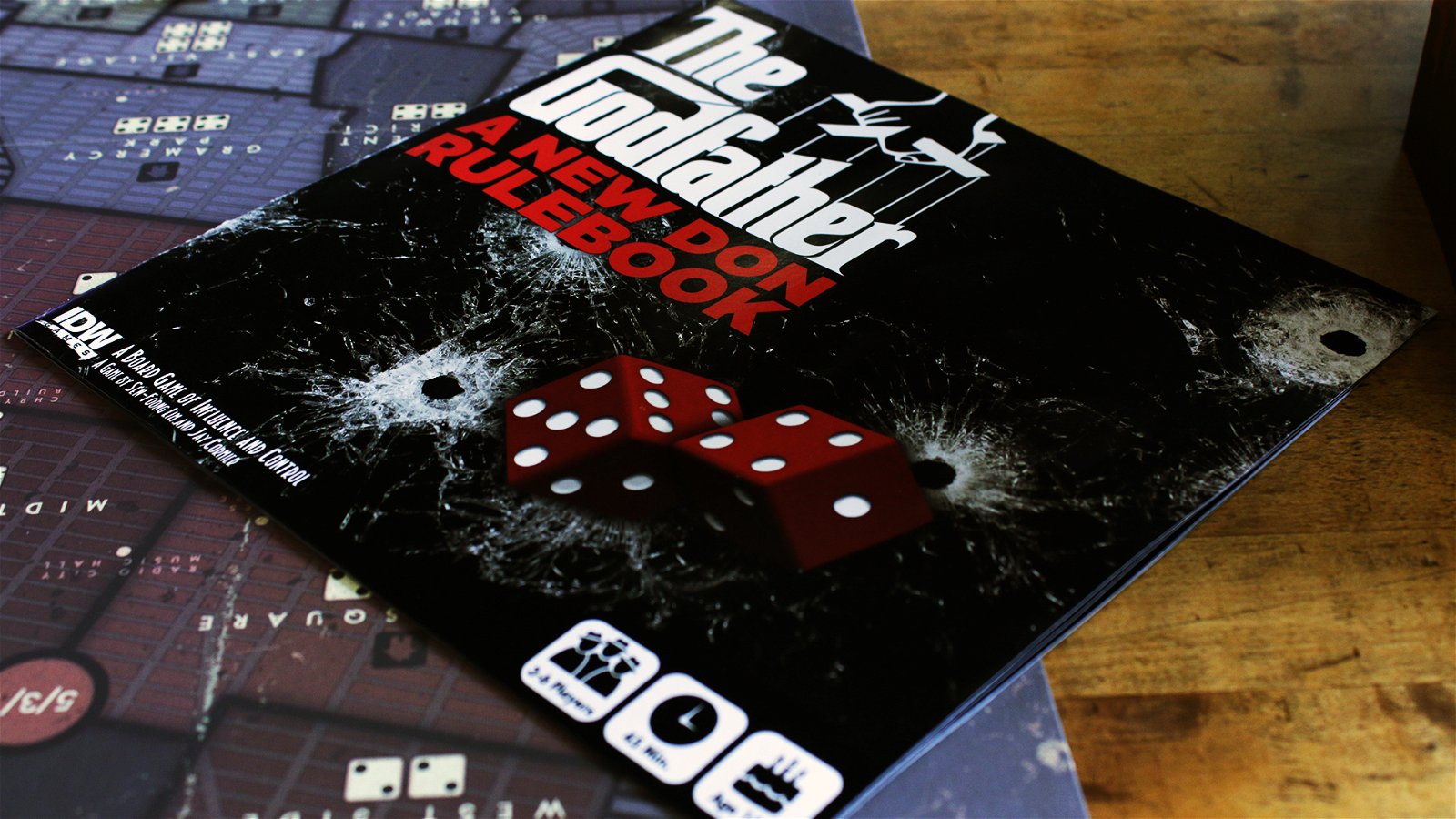 By nature, I distrust board games based on movie or television franchises. Such transparent attempts at cashing in on a popular name can too easily preclude any honest effort at creating a compelling gaming experience. And while some franchises at least seem likely to lend themselves well to gamification—Game of Thrones, for example, has the word “Game” right there in the name—many more don’t. A slow-paced mafia flick, howsoever beloved in some quarters, certainly didn’t strike me as a likely candidate. Still, I decided to give The Godfather: A New Don a shot. Surprisingly, it is at core both fun and challenging, though it suffers rather than benefits from being a movie tie-in.

The game box promises a 45-minute experience, and while the first game takes longer, that seems about right for subsequent sessions. There’s a lot to be said for a board game that can actually be played in reasonable amount of time, especially if it also has some depth to it, and The Godfather: A New Don does having a surprising amount of depth. It actually reminds me strongly of a more complex form of backgammon; in that it’s a die-rolling game of chance that nevertheless features strong strategic elements in terms of what players decide to do with their rolls. This puts it in a gaming sweet spot. A game reliant entirely on luck wouldn’t hold a serious board gamer’s attention for long. A game dedicated entirely to complex tactical manoeuvring would likely exclude many casual gamers. At the very least, the need to match player skill levels would make it a poor choice for a casual game night. A game such as The Godfather: A New Don, though, rewards experienced and/or cunning players without guaranteeing them victory.

The rules for The Godfather: A New Don are really quite simple. Each player starts with a pool of five dice, rolled secretly behind a screen. One player—determined initially by a die roll—is the Godfather. The rest of you must each reveal one of your rolled dice and offer it as tribute to the Godfather. The Godfather may either accept the revealed die or demand another of a specific value. If you have the requested die, you must turn it over, otherwise, the Godfather gets nothing as a punishment for his greed. In any case, you get a “favour” in exchange for your offer of tribute.

After you’ve gone through this first phase of the round in The Godfather: A New Don, your turn consists almost entirely of spending dice. You can spend them to buy control of neighbourhoods; to buy muscle to protect your existing territories and to make it possible to force other players out of theirs, possibly as the new Godfather, but only on your next turn; or to buy an empty Vegas spot, which gives you a shot at getting extra dice in your dice pool on a later turn. The only other thing you can do is cash in favors to alter your dice pool—but any altered dice can only be spent buying control of neighbourhoods, so you do this early in your turn or not at all. And that’s it. If you’re the Godfather, you can’t even do that much—you’re limited entirely to buying territories.

But each decision you make within those simple rules feels important. If you spend all your dice expanding your territory, you won’t have any muscle to defend your neighbourhoods next turn. If you spend all your dice on muscle, you aren’t gaining any territory. If you split the difference, you might still be outbid on muscle and so lose the only territory you bought. As for buying territory, do you want to buy a couple of cheaper properties, making it more likely one will be stolen from you later on, or a more expensive one, putting you behind in the number of neighbourhoods you control but making it less likely that the one you do have will be stolen? And which neighbourhoods should you be going for anyway? Are you going to try to dominate a high point district, or would simply tying for second place in several of the lower point districts be a better strategy? The Godfather mechanic itself is interesting. The Godfather ends up with a higher dice pool—much higher, in the case of 5 and 6 player games, and is guaranteed to be able to muscle out every other player for that turn. However, the Godfather almost certainly won’t get to remain the don, and will hence be vulnerable next turn. So the goal isn’t necessarily to be the don as often as possible, but to be the don at the right times. It all makes for very interesting and engaging gameplay.

The drawbacks to The Godfather: A New Don, on the other hand, all stem from its tie-in nature. The Godfather theme overall is weak. Sure, the central conceit works just fine. There’s nothing quite like sitting there as the don, viewing all of the dice the other players are offering up as tribute; deciding which to accept and which to spurn in favor of demanding something more to your liking; knowing all the while that this bounty comes only by the granting of favors, which may—and most likely will—be called in to your detriment at the most inopportune possible moment. But beyond that, which could have been glossed in numerous other ways, it doesn’t really work. The player screens each have the name of a different crime family on them, but I don’t remember what any of them were, not even the one I was playing as. The factions are indistinguishable and so unimportant. I never felt like I was dumping someone with cement shoes on into a lake when spending a favour, despite the rulebook encouraging me to view it that way.

But the above would just be a minor grumble if it weren’t for the game board design. To capture a gritty Godfather-esque type feel, the neighbourhoods on the game board, colour-coded by district, range from dull red, to dull brown, to an even duller grey. As a result, the districts all sort of blend together into a monochromatic blur, especially in low lighting. This is Not Good, with capital letters, in a game that requires you to see at a glance who controls what in each district. Each neighbourhood also has its dice cost stamped on it, and since the districts are defined by groups of neighbourhoods with similar dice costs—groups of ones, groups of twos, etc.—this could be an effective substitute.  Unfortunately, in a five player game, it is impossible to place your figures on the board in a way that doesn’t block at least one player’s line of sight to the dice cost. This leads to a lot of neck craning, piece shifting, and general annoyance as you play. The game would have been so much better—though much less Godfather-esque—had they gone with something more along the lines of Risk Legacy continents—very clear, bright, and above all distinct colours for each region. Likewise, the “soldiers” in The Godfather: A New Don are all represented by identically shaped pieces of wood—only the colour differs amongst players. Thematically this makes sense—the faceless enforcers of the mafia are no doubt mostly interchangeable in real life, too, but also adds to the difficulty of quickly getting the information you want.

The drabness of the game board and its detrimental effect on the gameplay probably become less of an issue the more you play. I can see experienced players just knowing where the borders of each district are. And if I’d had the time to play until that point, I might well have given this game an eight, maybe even a nine depending on how many different strategies emerge over time. As it is, I can’t really go above seven. The Godfather: A New Don is a nice little game with a great balance between luck and strategy, simplicity and complexity, but the memory of the frustration of trying to see what I needed to know is still just too fresh. Still, I’ll probably end up playing this one again, which is its own sort of recommendation.

The Godfather: A New Don is a nice little game with a great balance between luck and strategy, simplicity and complexity, but the memory of the frustration of trying to see what I needed to know is still just too fresh. Still, I'll probably end up playing this one again, which is its own sort of recommendation.

File Under: Board Game, boardgames 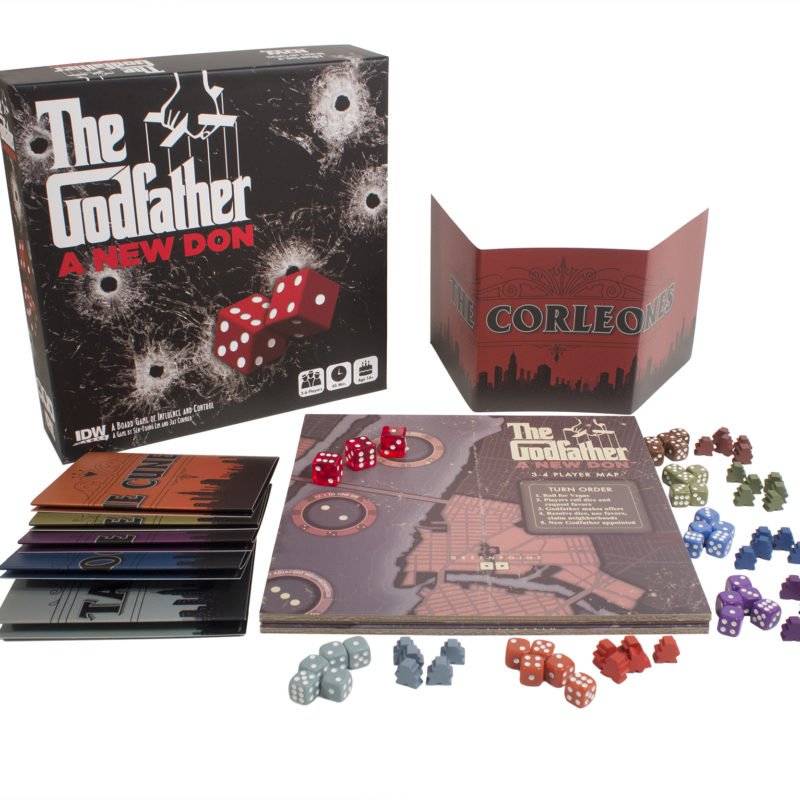