Just give us the greatest hits already
SCORE: 6/10 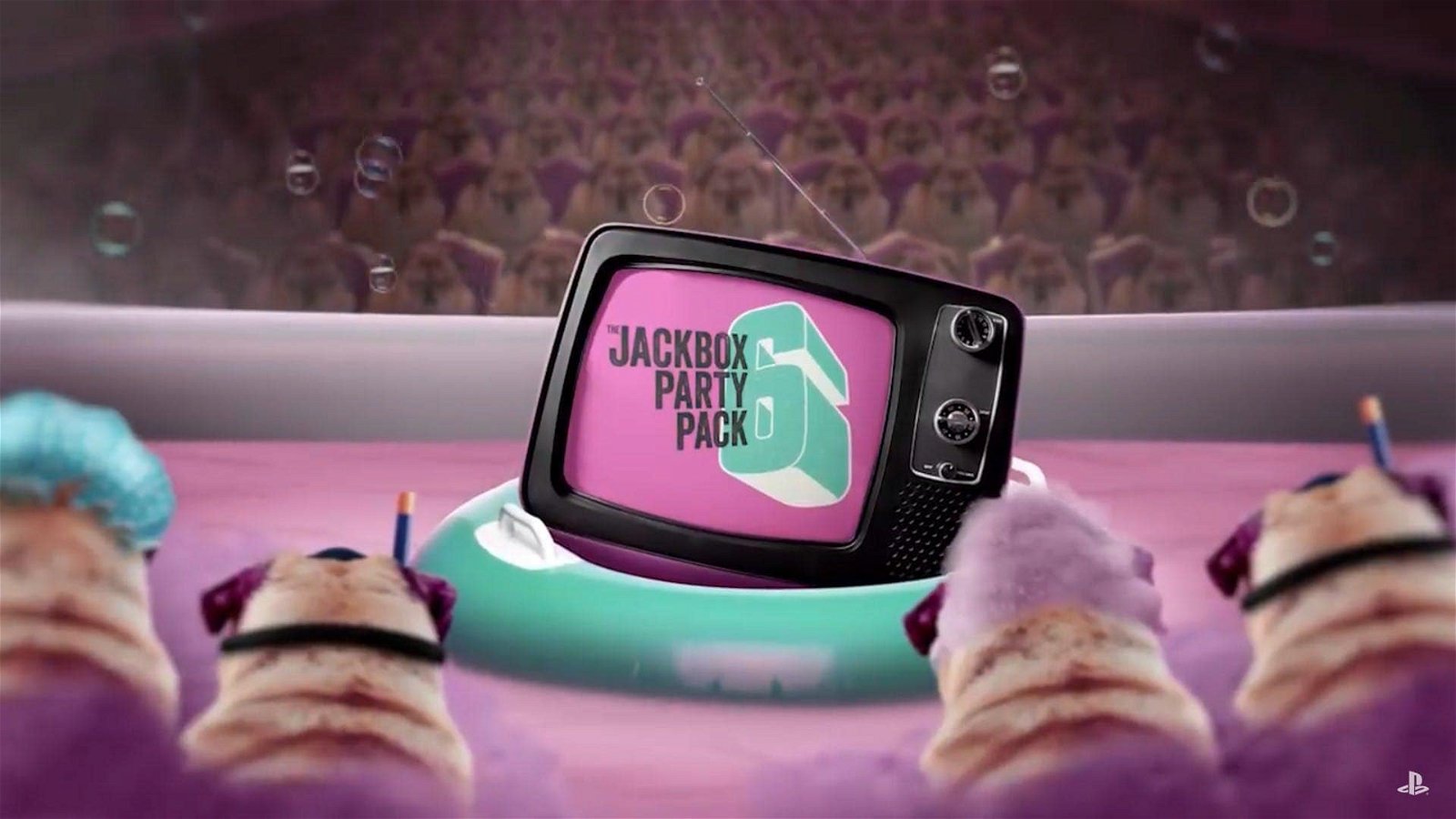 The Jackbox Party Pack 6 is another collection of minigames to play with your friends, enemies, or live stream to viewers if you so choose. Like previous entries in the series, players play via web browsers on smart devices or computers while watching one central game screen to guide the action. This sixth entry brings with it four new games and one sequel, none of which are all that exciting or fun by comparison to previous collections.

Trivia Murder Party 2 is, well, more Trivia Murder Party from The Jackbox Party Pack 3. There isn’t a whole lot different here, or at least enough to be recognizably different. Sure, there’s new dialogue from the host, and some new graphics and minigames, but nothing gameplay-wise stood out to me. It’s essentially just a multiple-choice trivia game with a horror-themed aesthetic and host. If you’ve always wanted a spooky voice to read your trivia, then first of all what’s wrong with you—but secondly, this is the game for you.

Role Models is the first new entry in the series and must be played with people that somewhat know each other since you’re essentially picking and choosing which of your friends fit certain traits and then seeing the result at the end. There are pop culture references here and there, but for the most part, it’s just a way to dunk on your friends’ personalities. It’s colourfully animated, but the scoring and end goal is a bit confusing to the point that even winning didn’t feel rewarding.

Joke Boat is maybe my favourite entry in this collection, but only because it might be so bad it’s good? You get preselected comedians with random catchphrases they say after each joke they tell that make little to no sense, much like Larry The Cable Guy’s “Git ‘er dun” catchphrase. You and your friends essentially play adlibs by typing in entries to prompts like nouns, pronouns, an animal, etc. and then use those entries to fill in setups for jokes followed by your own typed-in punchlines. This, like many games in this pack, requires a lot of the entertainment value to come from the people you play with, and if they aren’t funny—at all—you’re going to have a bad time. If you like making cringey dad jokes, climb aboard the Joke Boat.

Dictionarium is also one of the better games here. It prompts players to come up with a definition of a made-up word, then uses that word in a sentence after other players have voted on the definition. This is another one of those “hope your friends are entertaining” kind of games, but it’s not nearly as hard or as dependent on that as telling jokes in Joke Boat.

My least favourite game of the pack is Push the Button, which is basically this collection’s “Werewolf” or mole style game where two alien players are working against the others, with the goal of having the other players suspect each other of being the alien and ejecting each other from a spaceship. On paper, it sounds hilarious, but in action it’s confusing. The aliens are given prompts at different times than the human players, meaning their answers are often so telling the game can be ended pretty early on. Also, the alien players can just say “these humans are the aliens” and essentially end and win the game, which doesn’t feel great or well designed. If anything the aliens shouldn’t have a say in the matter other than perhaps a vote.

I think my single biggest complaint, however, is one that has been long-standing with the series in that its moderation features for streamers is somehow still lacking. I streamed a few hours of the pack and had to deal with trolls making racist or offensive names joining my game, which I couldn’t block or ban in any way that I could find. I even had on options that force players to be logged in with their Twitch names, and also provided the room code selectively to viewers, but still had the same people show up. Also, the Twitch names listed in the game? I couldn’t find them. So I’m not sure if there’s spaces or underscores not showing up in names, but there was no way to prevent them from doing what they were doing. There desperately needs to be a way to ban players based on their Twitch name and/or IP from either the game or the Jackbox site itself. Otherwise playing with viewers while streaming is just asking to have someone say a racial slur to your viewers in their screen name, as you can’t moderate those or stop them from showing up initially—and yes, I realize this is also an issue for Twitch.

I’ve played all of The Jackbox Party Pack games and, I have to say, I’m kind of over them at this point. The novelty of playing with friends via their phones was fun and innovative at first, but now the concept feels tired, especially with the newer games not being all that interactive aside from text entry or selecting from multiple choices. The lack of any meaningful moderation tools to combat trolls while streaming makes this a bust for anyone playing with viewers, and a lot of the games are designed for playing with people you know, but those people would be better served with previous titles in the series than this one. I just wish the developers would either sell these games separately or make a greatest hits collection at this point instead of trying to reinvent the wheel with each entry and failing.

The Jackbox Party Pack 6 brings with it four new games and the sequel to Trivia Murder Party. It's more polished than the previous releases on launch, but none of the new games are particularly great.