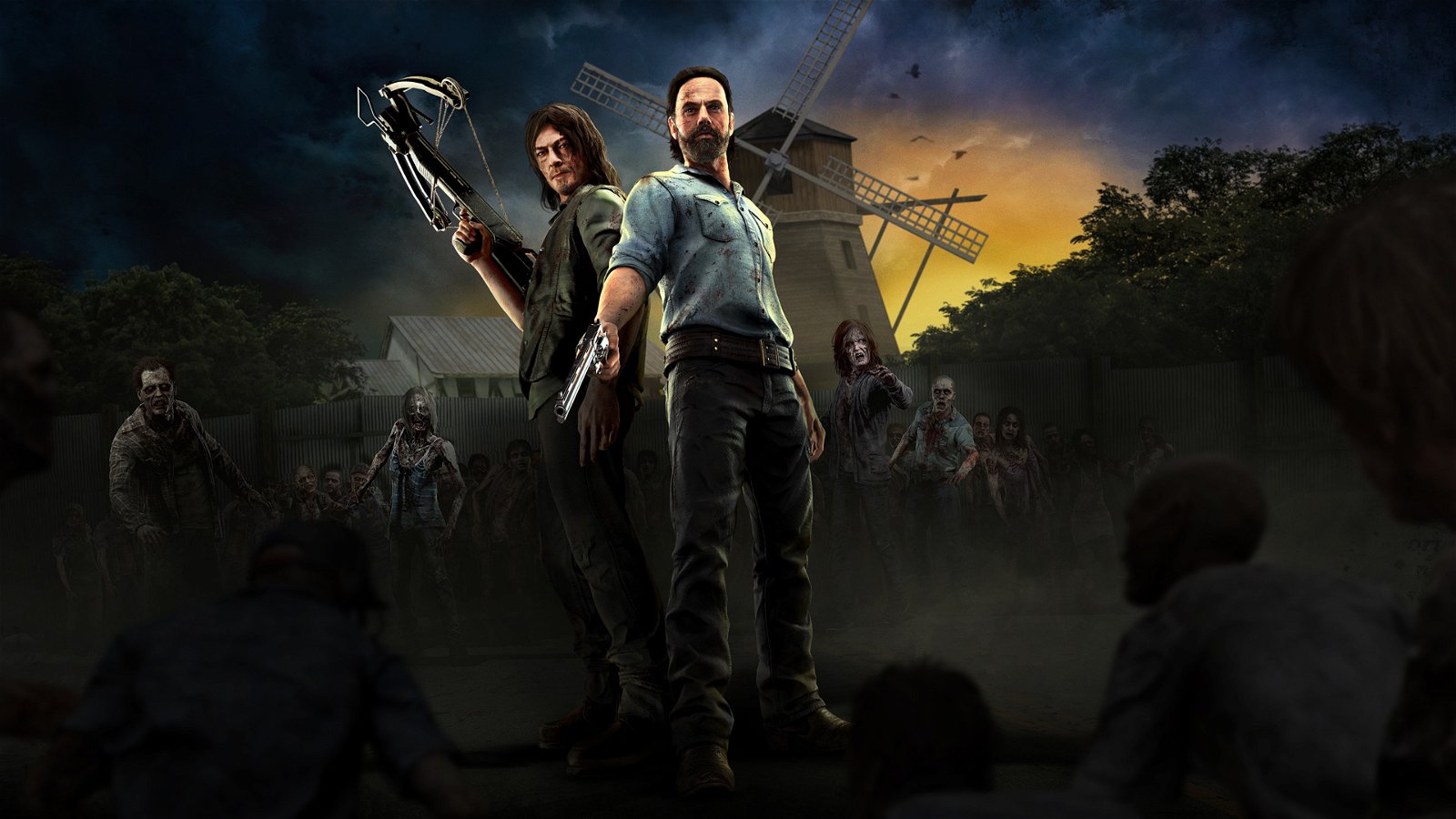 The Walking Dead Onslaught is miles apart from being a fully-realized game based on the franchise, but still holds its own as a fun zombie shooter.

Following Skydance Interactive’s earlier franchise dibs with The Walking Dead Saints & Sinners, I was surprised at how much depth there could be in such a genre. By combining survival horror with some existential dread and strong human adversity, it also set a high bar for how Robert Kirkman’s universe can work in VR. The Walking Dead Onslaught falls short of the resource-driven tension from its counterpart. But has the advantage of veteran VR studio Survios and AMC to create a somewhat more enjoyable experience based on the iconic TV series.

Along the 2020 VR pipeline, The Walking Dead Onslaught is the second game to release and features the show’s cast, settings and action which made viewers hooked since 2010. Its action was fueled by seeing series staples like Rick Grimes, Michonne and Daryl Dixon fighting zombies – which is what exactly Survios has focused on in their own VR game. Gone are the creepier walkers shuffling in the fog, as the franchise’s zombies slowly became less of a threat across the series. This is where Onslaught takes place between Seasons 9 and 10, after Rick’s settlement and the Militia battled Negan’s Saviors. Like The Walking Dead‘s viewers over time, players jumping into VR have grown accustomed to seeing good-old-fashioned zombie kills. But that’s as far as Onslaught goes with its core gameplay, bordering on an arcade-y experience that plays it too safe with AMC’s license. Surprisingly, it’s also the official game fans of The Walking Dead series have been waiting for. The Walking Dead Onslaught fills that licensed void, despite games like Arizona Sunshine and Dead Horizon being around.

Unsurprisingly, expect yourself to be killing walkers. Unfortunately, that’s all there is to it. It’s hard not to look at Saints & Sinners for having the perfect balance of what makes The Walking Dead unique. Its elements of zombies are just one part of an equation with rival humans surviving out of their own best interests. This makes Saints & Sinners‘ universe double-dip in danger. Deteriorating weapons, crafting and looting were also elements reminding VR players they never felt safe in Kirkman’s world (as it should be). Meanwhile, The Walking Dead Onslaught chucks much of that fear out the window in favour of a traditional action game. Players feel more like John Wick as they annihilate walkers in their path and to their heart’s content. Some players might appreciate literally becoming their favourite characters and using their weapons without any direction. Others can spend hours running around to kill an unspecified amount of zombies just for the heck of it.

Survios had some weight on their shoulders with carrying a new IP like The Walking Dead. But they stuck to their strengths in delivering a signature brand of physical gameplay seen in Raw Data and Creed Rise to Glory. Onslaught features Survios’ intuitive run-and-gun shooting mechanic. Players won’t have any trouble holding guns to aim and fire manually while reloading quickly. The game is also accessible for left and right hands and asks for a dominant hand calibration at the start. It’s a nice addition in an already comfortable game that requires tons of turning and moving. This can be done with joystick or arm swinging. Snap and smooth turning are also an option, though players are better off using their muscle memory to turn and fight walkers. A brief combat tutorial was enough to make me excited for the carnage ahead, and it’s absolutely fun. The guns have a weight that’s just right for two handed use. You can also use guns one handed without much limitations, just as long as you aim well. It made for some pretty cool TV moments and bordered on DOOM as I grabbed zombies by the neck and executed them. Developers have nailed The Walking Dead Onslaught‘s melee combat, as pushing zombies back for crowd control becomes another TV adapted feature that’s fun and powerful. You can even push zombies back, or trip one and watch the rest stumble for giggles. They’re just enough to make up for its barely responsive inventory system inspired by Half-Life Alyx, where you move your hand into one of four slots and equip a weapon. While I was clutching a zombie’s neck, the last thing I wanted was equipping an empty pistol (again) when I needed the knife.

Since The Walking Dead Onslaught doesn’t use Saints & Sinner‘s stamina or breaking weapon system, players are much more efficient zombie killers this time around. It’s refreshing to not have to worry about energy as I heave an axe over a walker’s skull. It’s also a treat to reload ammo without losing my reserves as I blast away at a herd. But there’s still some considerations to be had with ammo and health, which are plenty over your supply runs. Survios doesn’t leave you hanging on resources in order to keep its momentum. You’ll rarely (if never) die as long as you keep your weapon ready and watch your back for sneaky walkers. They’re ugly, always shuffling and are deadly in numbers if you start becoming careless. These are the only things players have to worry about as they continue having fun in Onslaught, until the game can start feeling repetitive like its drawn-out TV series. There’s also fun to be had in replaying a supply run by changing your four-weapon loadout and trying upgrades which drastically change the quality-of-apocalyptic-life. Difficulties also significantly leave room for challenges. Playing on Novice felt like a superpowered wish fulfilment at the cost of supply turnout. The veteran difficulty rewards big loot, dries up ammo and encourages swift melee multitasking to survive hordes of walkers. But players are still trapped in the cycle of picking up supplies, headshotting walkers and pushing doors open until the end of playtime.

Sure, there is some variety in collecting an arsenal of pistols, rifles, melee weapons and signature character pieces. Certainly, I was spoiled with upgrading my weapons for way more walker-killing fun. Yes, the game features special walker types straight from the show (including the spiked metalhead ones). Absolutely, there is a campaign and open-ended supply run mode. But the entire experience is made dull by The Walking Dead Onslaught‘s overreliance on gameplay over substance. Survios has stayed in a limit of a short story and shorter supply run mode that is repetitive as hell. AMC has lost its storytelling knack for some reason and delivered a flat campaign told from Daryl Dixon’s perspective. Interestingly, the levels are told through flashbacks as Daryl sits with you (as Rick) over the fireplace. You then enter Norman Reedus Daryl’s body and play through a linear, but expansive set of locations. From churches, trainyards and biker gang strongholds, the story feels deceptively short until later levels get longer. For variety’s sake Daryl’s levels are also locked until players complete more supply runs. This is where players drop into a handful of locations reused from the campaign and loot for supplies to build New Alexandria. The Walking Dead Onslaught has taken some notes from Saints & Sinners by adding a “herd” behind players, encouraging them to manage their time and stay a step ahead. But the threat becomes a minor annoyance as players quickly learn how to sweep through houses for materials, health and new guns.

It’s somehow engaging, as The Walking Dead and Death Stranding alumni Norman Reedus makes an effort to keep players company as they trudge along. Reedus doesn’t get an Emmy here, but his soothing thoughts and commitment to lines grow on you across five to six hours. Melissa McBride and Josh McDermitt somewhat steal the show as their respective characters Carol and Eugene over supply runs. But the dialogue becomes unintentionally hilarious as Carol randomly yells “Yeah, that’s a headshot!” every ten minutes in your dance of death. Daryl’s campaign of opening doors and killing walkers gets interrupted by Rick, who strangely acts like an overprotective dad. I made weird VR faces at their constant banter, which made Daryl feel like a frustrated teenager explaining why he snuck out of New Alexandria. Rick becomes this broken record player of protecting everybody, including Daryl who is lectured at with every new detail shared. Unlike Saints & Sinners, players never encounter or fight another human being in The Walking Dead Onslaught. Its main characters are reserved as life-sized NPCs guiding players across a small hub in New Alexandria. It’s worth noting the hub is a place for players to build and upgrade building, with specific ones adding perks for health and ammo as they venture out. However, players might just spend all their resources on weapon upgrades without any real consequences by ignoring New Alexandria.

Visually, Onslaught looks great over max settings on PCVR. Even over the Oculus Quest Link, sunlight shimmered off weapons and walls naturally. Walkers featured just as much tattered details from the TV show, giving players a clear idea of who they used to be pre-apocalypse. They also decay, with giblets and bloodstains splattering on walls and pavement with impressive physics. Some textures over The Walking Dead Onslaught‘s characters suffer from pop-in, while cheesy dialogue is masked on expressionless faces. The game’s countless houses might also feel familiar, but are filled with decrepit detail. Wall messages, abandoned mattresses and corpses all mimic the TV show’s eerie setting enough to bring players back.

The Walking Dead Onslaught doesn’t exactly escape the shadow of Saints & Sinners, which provides a story-heavy survival horror game for players. Despite falling into a few traps that come from officially-licensed games, Survios successfully delivers a fun walker-killing fantasy fans of the TV series have craved for years. It’s easy to say Onslaught is the game The Walking Dead Survival Instincts should have been. Survios uses what’s given by AMC, cuts to the chase and lets VR players become a part of the show without its baggage.

The Walking Dead Onslaught does its TV show justice, delivering satisfying walker fights fans have dreamed about without offering much of anything else.