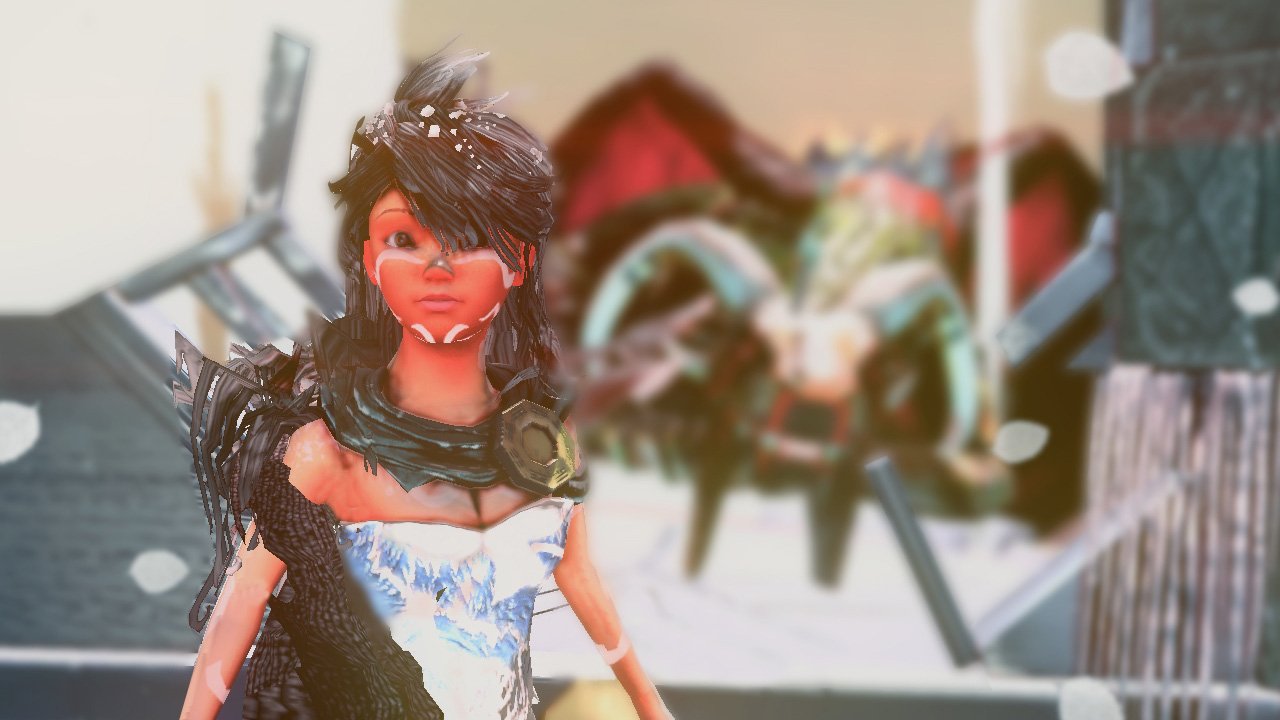 In the stark world of Toren, the vengeful sun has scorched the Earth as punishment for the sins of man, leaving only one alive to start anew. Mixing a variety of mythologies to create a grim fairy tale, the Brazilian-designed game is an interesting experiment in style over substance. Toren is an indie game with a sharp focus on creating atmosphere and lore, and despite flaws is an engaging journey reminiscent of the same emotions Brothers evoked.
Toren takes place within the tower of its namesake. The player takes the role of the Moon Child, a young girl who must climb the tower to grow into her full potential to defeat a dragon guardian. The hook is that this cycle of growth and struggle has been repeating itself for an unknown span of time. It seems once a great city existed around the Toren, but the greed of men caused them to try to attain god-like powers by stealing the soul of the moon and transferring it into the body of a girl.

The sun, in its rage, killed the night so the earth was razed by endless heat, extinguishing almost all life. The sole surviving member of the original group of men, known only as the Wizard seeks to undo what he helped wrought by aiding the Moon Child to return home. The Wizard, now only a creepily-dressed skeleton, speaks in rhyme and through interactive dream sequences, and the game has a beautiful, wistful surreal quality.

The real antagonist is the dragon who guards the tower. This beast spews evil that petrifies anything caught in its blast and is hell bent on stopping the girl from reaching the top. To aid her, the Wizard has secretly kept the last wholesome thing—a sapling Moon Child plants and uses to ascend. Obviously, it’s a fast growing tree, which also handily contains a sword capable of destroying the dragon (and protecting the child from its attack).
Toren is essentially a third-person exploration and puzzle-solving game with some combat thrown in. Sword play is simple button bashing, but used sparingly. Most of the rest of the game is jumping gaps, climbing the tower and tree, and pushing/pulling large objects. The dream sequences frequently task the child with pouring sand onto imprints of constellations to unlock new elements of the back story and grow the character further.

Moon child grows in the literal sense, starting from a young girl and ending as a fierce, grown warrior. There’s little in the way of actual traditional ability and stats development, though. At one point, for instance, she can choose to empower the sword through a blood sacrifice, but it’s not mandatory. There are frequent passages where the game is incredibly obtuse about her next objective as well, especially during the dreams.

There’s a near total lack of guidance through the game, though most of Toren’s few hours are straightforward. The poetic narrative is fascinating and helps push the player along to find all the dream portals. There’s not much in the way of secrets to find outside of the dream portals though, which is a shame given how lovely the overall game world is. An option to explore it further would have been welcome, but the maps are remarkably linear.
Another major problem is the general clumsiness of the controls. Whenever Moon Child is near something interactive, an exclamation point appears by her, but there’s a distinct lack of precision to her movement. Given that some sequences require quick object manipulation under duress, this causes unnecessary frustration. The game isn’t terribly hard overall, but the lack of refined controls make some sequences unduly trying.

While Toren’s visuals aren’t exactly cutting edge, there’s a distinct visual style at work, adding to the wistful mythology/fairy tale motif. That said, the game suffers from really terrible levels of graphic clipping. Moon Child’s hair constantly disappears into her shoulders, but the problem is everywhere.

The soundtrack, however, is superb. Everything from the atmospheric score to the alien language dialogue is amazingly well done. The excellent presentation and surprisingly deep back story work so well that the flaws seem more distant. It’s not that Toren is a great game, so much as it’s an interesting story experience.

Toren won’t appeal to everyone, obviously, but creates a wonderfully moody and magical atmospheric vibe that few games achieve. It’s only a few hours long, suffers from clumsy mechanics and graphic glitches, yet still manages to suck the player in thanks to its exceptional audio work, visual style, and intriguing mythology.

Final Thoughts
Toren takes place within the tower of its namesake. The player takes the role of the Moon Child, a young girl who must climb the tower to grow into her full potential to defeat a dragon guardian.
More From CGMagazine