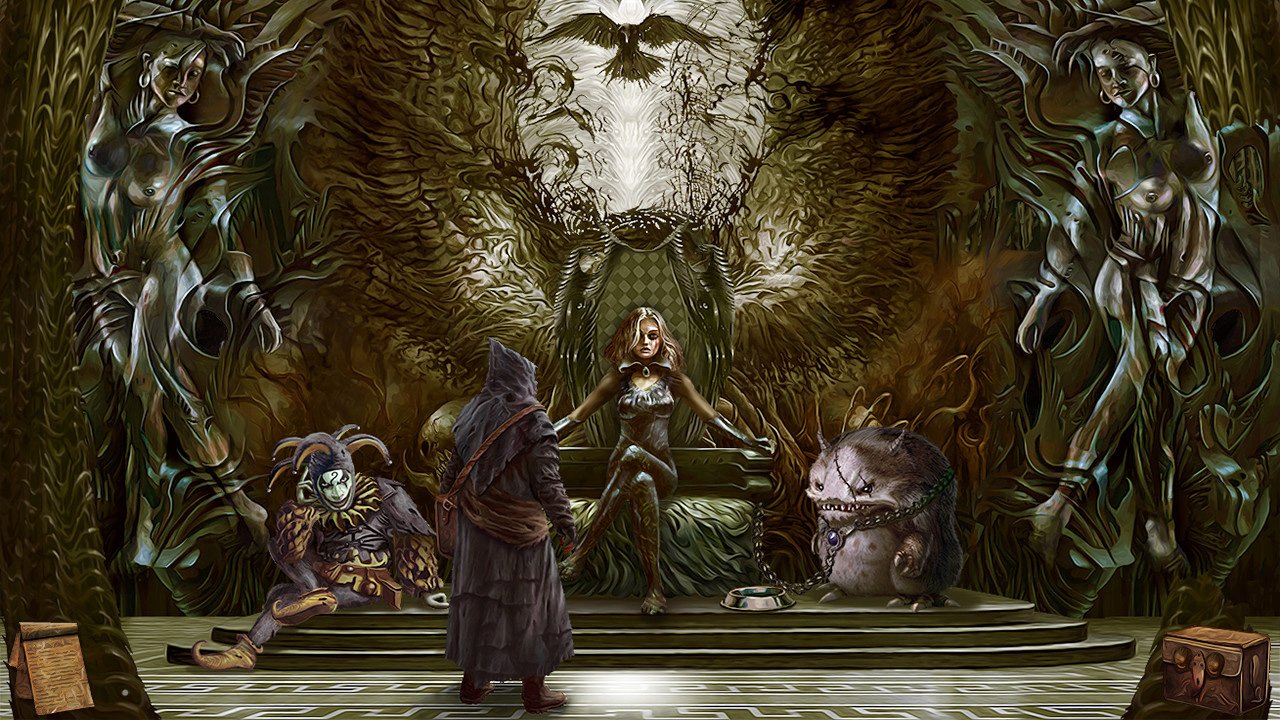 Do something iconic and noticeable enough, and it becomes something to be emulated. H. R. Giger and his distinctive, nightmarish style (characterized by the long-headed Aliens and rather phallic and outright pornographic surrealism) slips into a lot of media. It makes sense that someone would make a game like Tormentum, which is touted as evoking the work of the late artist in its dreamlike, unsettling world. A crowd-funded property that also follows the adventure games revival, Tormentum is a serviceable property, if somewhat straightforward and with some annoying bugs.
The story begins with our hooded protagonist in a cage, dangling from underneath a dirigible, along with an armoured otter-man, heading towards an organic-looking castle. Conveyed to a castle and told you’re to be tortured to purify you of your sins, you’re left in a prison sell with only some skeletons for company, as fire rains down outside.

The art is gorgeous, surreal, and dark, as was promised. It doesn’t quite make sense, of course – giant faces in walls and towering, skeletal beasts rarely do – but that’s part of the fun. Puzzles using the art assets abound, like assembling an angelic statue, bedecked with skeletons, or rearranging a doorway to restore a certain face. With a style like this, it’s easy for levels to become indistinct and murky, key features becoming difficult to find without hunting for the magic pixels you can interact with. This game does not have that problem. There were a few situations in which usable items were obscured by the graphical effects (notably, a mist effect prevented me from seeing a key I needed to progress.) Overall, interact-able items either have gleaming auras over them, or shimmer brightly.

The puzzles are about what you’d expect from a game like this – a lot of pattern recognition and association games, and a lot of combining items together in order to fix some complex machinery. None of it is particularly frustrating, and some of the puzzles were rather clever. The environments allow for some bizarre and otherworldly situations, and some that are strikingly mundane (cooking poisoned meat to kill a dangerous animal) work quite well.

The writing, however, suffers a bit from being a bit too straightforward. The characters have personality and complex motivations (and many actually recur), but I found the game’s attempt at giving you choice fell flat due to a largely all-or-nothing ending. Moral choices occur and often have long-term consequences, and there’s even a few twists that showed an honest attempt at moral ambiguity and grey areas. However, the game’s endings appear to undermine that, as there are only two results you can get – good and evil. This became somewhat of an issue for me in my first run, where I opted to take revenge on a few people I considered irredeemably evil, but showed compassion to others I felt were victims of circumstance. The game allowed for this kind of choice but didn’t provide a separate ending supporting, instead fall back on binaries, which like a great oversight. The writing tends to be basic and relies on implication and suggestion rather than gobs of dialogue, which would have allowed for all sorts of interesting ambiguities. I enjoyed the attempted themes, but felt they were betrayed by a weak, buggy set of endings.
The bugs that did crop up were serious problems. The first room will lock out your UI if you look at objects before the window, preventing you from zooming back, opening notes or inventory. The only solution was to quit and restart the game. I also had an issue were no prompt loaded for a portion of the map, preventing me from accessing the western screens; this seemed to go away after I reloaded the game. I never, ever got the endings to work properly – or at least I don’t think they did, as I never got an achievement.

In the end, Tormentum feels like one of the dreams I (and many other teenagers) had from time to time. Inspiring to the imagination and often evocative, but easily forgotten. The game might have taken a bit more time to make the main character and its revealed back-story have more impact – how, I am uncertain, but I know I did not feel satisfied with what the game seemed to suggest. It deserves credit for its art and general functionality, but I feel that this one could have been more memorable.

A crowd-funded property that also follows the adventure games revival, Tormentum is a serviceable property, if somewhat straightforward and with some annoying bugs.