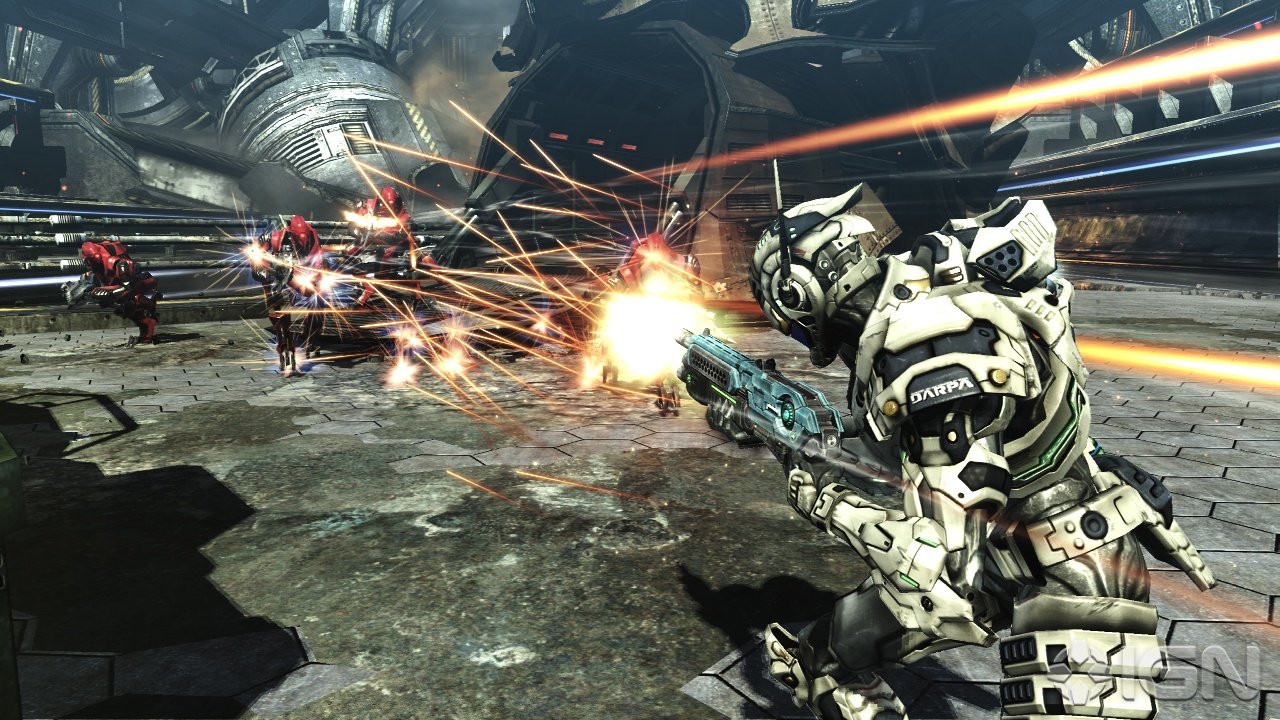 After playing Vanquish, it’s easy to imagine game creator/director Shinji Mikami skating and, while peacefully gliding across the ice, having a simple, inspired thought: what the sensation of skating needs to make it complete is bullets. And robotic bodysuits.

Perhaps it’s a testament to his unique vision that he’s not wrong.

Just like Nintendo’s visionary, Shigeru Miyamoto, Mikami understands that game mechanics can be built around a simple joy. In Vanquish this comes from the fact that sliding is enjoyable — and that sliding in a mech-suit equipped with an arsenal of futuristic firepower and bullet time slowdown abilities is even more enjoyable. Taking cues from sources as disparate as Gears of War, Zone of Enders and the genre of bullet-hell schmups, Mikami; and Platinum Games; have forged something that feels familiar enough to be accessible, yet still emerge as an unique experience.

Vanquish has a story: – the kind of story that exists purely as an excuse to put you in the right settings to shoot lots of stuff. It succeeds on that level with a fantastic B-grade sci-fi movie premise wherein a nefarious Russian, Victor Zaitsev, has just nuked San Francisco — with concentrated beams of sunshine — and is now demanding the United States unconditional surrender lest he does the same to New York City. The game casts you as Sam Gideon, a DARPA operative out to thwart Zaitsev and rescue the kidnapped scientist who made your superpowered bodysuit. Sam, a sort of Solid Snake by way of Ultraman, joins up with a group of marines in order to lend his state of the art firepower to their platoon as they work to complete their mission and save the US of A. Somewhere in there Vanquish also has a slapdash military conspiracy, some ham-fisted moral posing on the dangers of bureaucratic irresponsibility and, most importantly, a lot of fantastic macho one-liners.

It’s the kind of story that Mikami has always excelled in creating: a vision of some “supercool” world where, culturally, it’s kind of just like a late ‘80s action flick. The only female character in the game wears an impossibly short skirt, the protagonist chain-smokes, marines are always grunting “hoo-rah” and most of the cast talks like they’ve got gravel stuck in their throats. Vanquish provides the same kind of fun that Mikami’s best games always have — the over-the-top humour of God Hand, the genre homage of Resident Evil 4 and the I-can’t-believe-he-thinks-this-guy-is-cool coolness of his many protagonists are all found in the game’s absurdist, campy story.

All of the silliness, fortunately enough, looks fantastic. While your mileage on the game’s aesthetics may vary (depending on how fond you are of impossible looking robots and space station interiors), the graphical performance itself is stunning. Vanquish is packed with layers of minutiae — whether it be a gun morphing into existence from Sam’s multi-purpose suit or smoke billowing from a decimated building on the horizon. Despite this level of detail, there is never any slowdown during the action, and even the most hectic firefights perform smoothly, without framerate drops or graphic stuttering. At a few different points in the campaign Vanquish spices up its scenery a bit (throwing in a climate controlled park setting complete with long grass and blowing wind during one notable mission) but, mostly, the superb graphics are spent on homogenous sci-fi settings. Luckily, this is hard to fault when what is presented is done so well. Coupled with a hectic mix of guns, explosions and a throbbing mix of techno tracks, Vanquish’s presentation is spot-on throughout.

While the setting is sometimes lacking in variety the set-pieces almost never are. One mission sees Sam and his squad sieging an entrenched position, blasting their way up slanting hills while enemies run to turrets and pop up from cover all around the player to fire. Soon after the game makes you continue storming enemy placements while navigating a collapsing highway. Later on again Sam and the marines have to eliminate resistance as they move through a series of zero-gravity chambers. These moments make the player forget about a relatively boring backdrop and instead focus on the excitement of the situation at hand: something that is of the utmost importance when considering Vanquish’s biggest strength.

Gameplay is the real star of the show and, as mentioned before, it takes its inspiration from a wide range of sources. There are shades of many modern titles throughout the game but, at its heart, Vanquish is really a love letter to those arcade shooters where more emphasis is placed on player performance than narrative spectacle. Platinum Games has made every stage a bite-sized scenario where enemy types, level design and weapon availability add up to create a playground full of possibilities. Everything is designed with the intent of providing players an opportunity to make the most of their skills. Levels are sometimes laid out with enough room for you to glide around, melee kicking and performing gymnastics while, in other cases, you are funnelled into tighter corridors where Vanquish forces the proper use of its cover (and clever cigarette-flicking-distraction) system.

The core of the gameplay itself is stellar and the game has been designed to show off its strengths constantly. Vanquish definitely earns a place alongside the best of Platinum’s pantheon of style-driven action games, offering a degree of fluidity and bombast that easily stands alongside Bayonetta or God Hand. Sam’s suit is able to hold three guns and a grenade that are easily swapped out with anything found on the battlefield. Each of the shooting options is a blast to use — from the standard assault rifle to the lock-on laser system — and they all lend themselves to different strategies that couple well with the basic movement gimmicks. There’s a lot of fun to be had here, which pairs superbly with a design that promotes high replay value. Rather than craft a standard 10—15 hour narrative, Platinum decided to pare things back and concentrate on honing a set of carefully designed scenarios that reward different strategic approaches on each replay. While you will be able to push through the campaign in somewhere around five-or-six hours (depending on the difficulty setting chosen), Vanquish is always encouraging you to take your first run as something of a test drive. Some may bemoan the fact that the game is short, but its lack of length is actually one of its greatest features. Like some of the industry’s most cherished shooters, Vanquish doesn’t care if you can plough through it in a handful of sittings — it’s concerned more about how well you’re able to perform across each of its stages, a fact made explicit in the game’s inclusion of online ranking systems and the cumulative stats that pop up as you finish missions.

Some players may not like Vanquish for the very reasons that others will laud it as one of this year’s finest action games. With its brief campaign and cheddar-infused script, the game is something that many will find immediately off-putting. But, if you’re willing to appreciate what it succeeds at doing (and go into it with a sense of humour), Vanquish can be taken for what it really is: a breath of fresh air that’s super-fun to play and neatly combines the old and new schools of videogames.

Some players may not like Vanquish for the very reasons that others will laud it as one of this year’s finest action games. 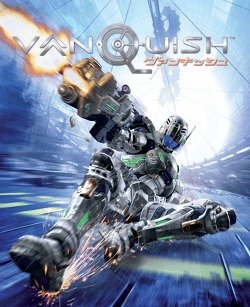