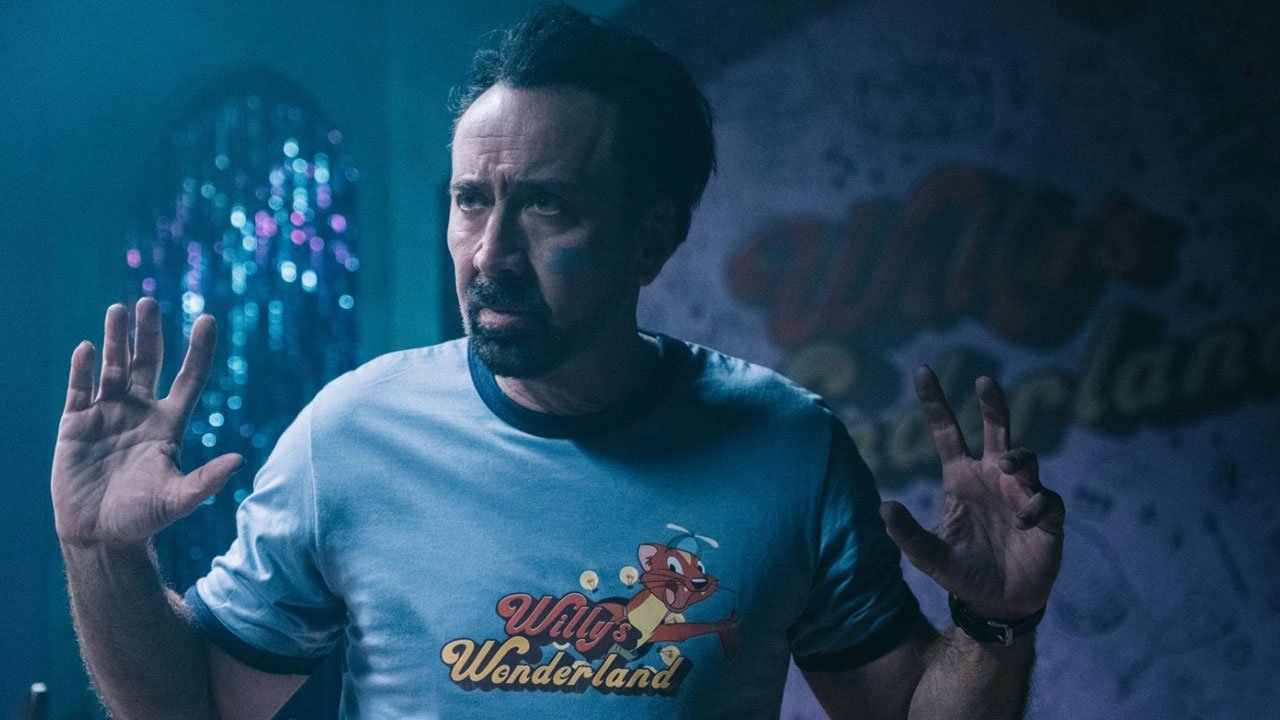 When I heard there would be a movie that had Nicolas Cage square off against demonic animatronic animals in an 80’s style kids restaurant, I did not know what to think. Now after watching it, and thinking about it for a day, I still have no idea how Willy’s Wonderland got made. It feels like a pitch meeting got out of hand and somehow got funding. Yet, in spite of that nonsense concept (or because of it) the movie works far better than it has any right to.

A silent drifter (Cage) finds himself tricked into cleaning an old Chuck E Cheese style restaurant known as Willy’s Wonderland. While the job starts as one would expect, cleaning and other menial tasks, things quickly shift as the animatronics come to life and thirst for human blood. Not to be deterred, Cage’s silent protagonist takes each new outlandish incident in stride as he works to clean and fight his way till morning.

But this being the B-movie throwback it is, things do not rest there, managing to deliver a hefty body count, teen sex, a dark backstory about serial killers, and a town of characters filled with “personality.” Willy’s Wonderland is a blend of the best tropes we know in the genre, with just the right amount of humour to never take itself too seriously.

As Nick Cage’s Janitor slowly works to clean things up — and fight the demonic forces that are trying to kill him— a group of ambiguously aged young adults look to strike back at the evil kids restaurant. Featuring performances by Emily Tosta, Beth Grant, Jonathan Mercedes, Caylee Cowan, and Terayle Hill, the full cast delivers wonderfully over the top takes on the stereotypical horror tropes, giving plenty of space for heads to roll and the mystery at the heart of the restaurant to be revealed.

With that all explained and out of the way, at its core Willy’s Wonderland is various excuses to show Nicolas Cage fighting different evil robot mascots, strung together with nonsense. From the interludes of Cage taking breaks to drink energy drinks and play pinball, to the absurd ways that different characters meet their end. This is a movie that takes what could have been a simple and throws all normalcy out the window, as it embraces the absurd.

While it is easy to get mesmerized by the bonkers yet silent character Cage is playing this go around, it is the overall feel of the movie that makes it all work. Willy’s Wonderland captures the look and style of drive-in schlock, complete with cheesy effects, lens flares, and gratuitous gore to keep the audience entertained over its brisk 88-minute runtime.

While it may sound Willy’s Wonderland is a “so bad it’s good” experience, there is actually a lot to genuinely enjoy with this movie. Cage delivers a captivating performance, even without speaking a single word. Emily Tosta’s sidekick-like character Liv brings some much-needed heart to the flick, and — given the budget — Willy Weasel and his animal crew bring a sense of menace to the proceedings, as ridiculous as they may be.
Though it at times feels like a drug induced fever dream, Willy’s Wonderland manages to deliver on its promise. This is the most fun I have had watching a horror flick in a long while, and stands as a great entry into the ever growing catalogue of Nicolas Cage genre work. While it does not reach the genre heights of Mandy, if you want to experience mascot slaying absurdity in a way only Cage can deliver, forget Five Nights at Freddy’s, give Willy’s Wonderland a watch.

Willy’s Wonderland delivers an absolutely wild experience that uses the insane setting, look, and characters to offer up one of the more enjoyable and bonkers films you will see this year. 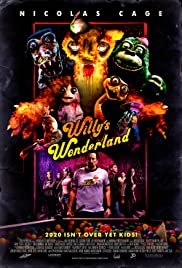