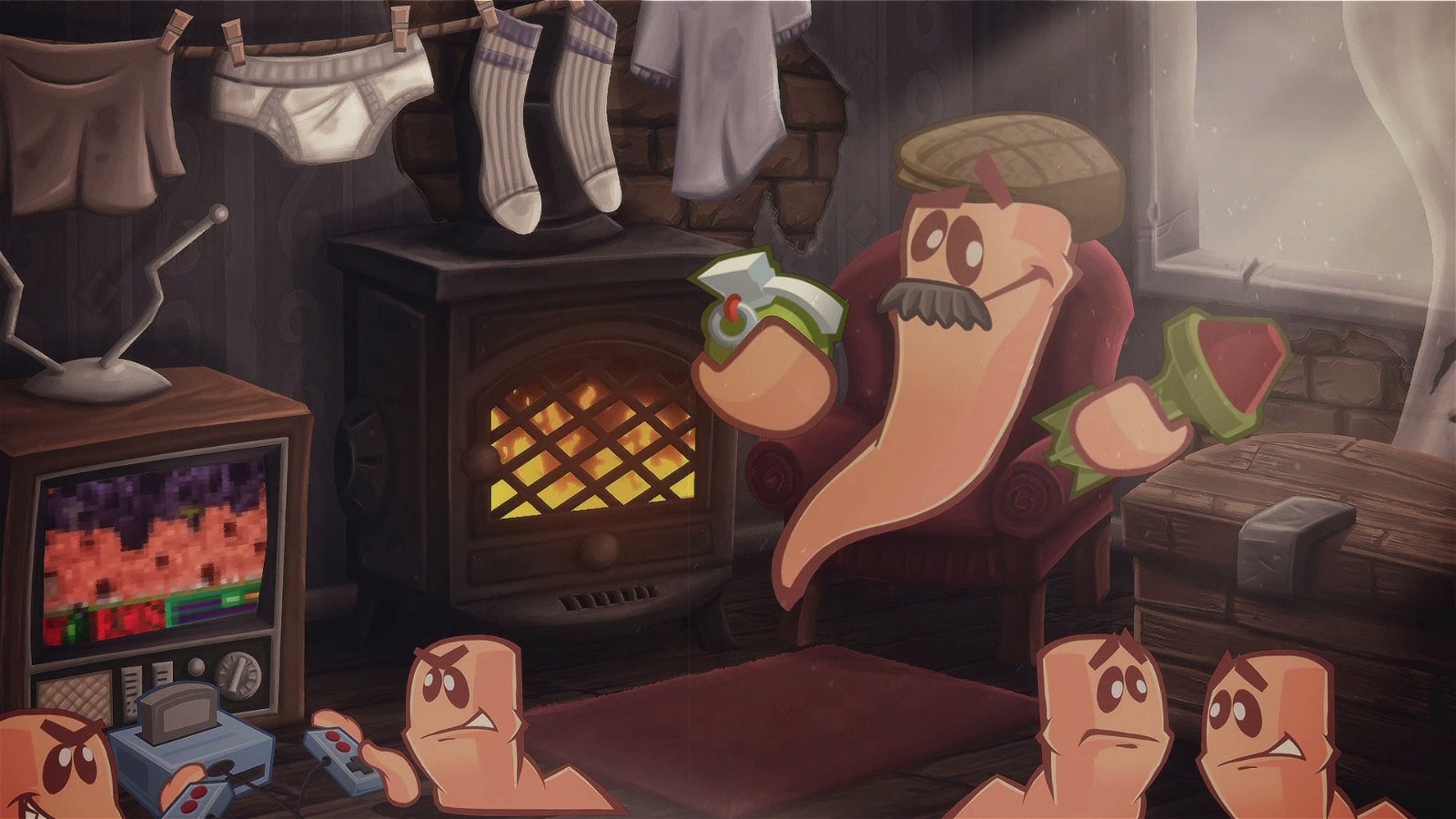 Those familiar with my writing will know that I missed out on the golden era of PC gaming and unfortunately, Worms was one of the games from that period that I never got a chance to play. Sure, I was aware of it, and I had tried similar games like Tank Wars and even got really into Gunbound back in 2003. Worms has come a long way, and thanks to the original’s masterfully crafted gameplay, has had to evolve very little. There’s really not much more that can be said, Worms’ reputation precedes itself, and Worms W.M.D is a welcome addition to the franchise.

For those of you who have never played Worms or are too young to know about it, the gameplay in Worms W.M.D is simple and fun. Players take turns trying to eliminate each other one worm at a time using a combination of geometry and calculated power. It is the very bedrock upon which games like Angry Birds is built upon. Terrain plays an important role in combat as well, with each attack obliterating small chunks of the 2D battleground, forcing players to reposition and recalculate their attacks—too many hits to the same area will cause players to fall to a watery grave.

Worms W.M.D plays fantastically, adding new features like buildings to take cover in, new vehicles—specifically the mech, the W.M.D is actually supposed to stand for Weaponized Mech Destruction—and for the first time ever: a crafting system (you know, because Minecraft). The crafting system, while fairly simple, does add some much needed freshness to the franchise, however I couldn’t help but feel it to be a bit ineffectual, given that players can craft items during their opponent’s turns.

Crafted items only need one turn to be ready, which includes an opponent’s turn, so there’s no sense of strategy in crafting a certain weapon and planning to have it ready for the right time as the item is always ready at a moment’s notice. If particularly unsportsmanlike-players want to craft airstrikes before each turn, the only thing stopping them are available resources, and the only limitation to that is the pre-game settings.

At its core, Worms is a multiplayer experience, and given the animated cutscenes I had seen on the Steam storepage, I was really hoping Worms W.M.D would take the route of Risk: Factions and provide a worthwhile story experience. Sadly, it does not and the “campaign” itself feels more like a collection of challenge missions than anything with any kind of narrative value or single player experience.

Worms W.M.D is easily the best-looking Worms game to date. Environments are vibrant and beautifully detailed; bearing a hand-drawn, almost watercolour aesthetic that adds a lot of charm to the game. The worms themselves are as cartoony and wacky as ever: well animated and almost resembling a character style reminiscent of Rayman: Origins. The silly voices are still intact, although they can get a bit annoying after you’ve heard the same one-liners over and over again for the entirety of a game.

The biggest inclusion in Worms W.M.D is the All-Stars DLC pack which includes skins, levels and weapons from a wide collection of indie games, and a few AAAs for good measure including: Goat Simulator, Unturned, Team Fortress 2, The Escapists, Rocket League, Saint’s Row and more. While the trailer showed some of the powers in play—like the goat’s tongue acting as a grappling hook, or the red, white and blue air-strike of BroForce—during my playthrough I could only seem to access the aesthetic side of the DLC. I tried equipping masks to see if they added powers, or would give me the ability to craft certain character-specific items, but I could find neither hide nor hair of them. I don’t doubt that they are in there but the game does not give you enough clues on how to find them.

While it does feel like the series hit its plateau a while back, Worms W.M.D is a welcome addition to the series, being beautifully crafted and as fun as ever.