Assassin’s Creed: The Fall is a three part comic book series released back in 2010 which was published over a four month period. I suppose the best comparison you could make with this mini-series is a similar effort Rockstar released to accompany the Max Payne 3 release. Now, UBI Workshop has released a deluxe edition of Assassin’s Creed: The Fall which is a book both fans and newcomers to the original run need to indulge in.

For those who are new to the series, the book is a compilation which examines the fate of a new protagonist in the Assassin’s Creed series, an extremely popular video game developed by the Montreal studio of French developer, Ubisoft. Instead of following Ezio Auditore da Firenze, readers follow the painful trek of Nikolai Orelov, a Russian assassin trying to find and destroy a magical staff his father warns him about.

While this is going on, the reader—in similar fashion to game’s generation hopping narrative—also follows the story of Daniel Cross, the story’s protagonist and antagonist. Daniel is a drug addicted, binge drinking man who suffers from the occasional psychotic, hallucinogenic episode brought on by something he doesn’t understand. As the reader delves more into the story, the twisted turns Daniel Cross takes and the questions he unravels draw the reader in even more. 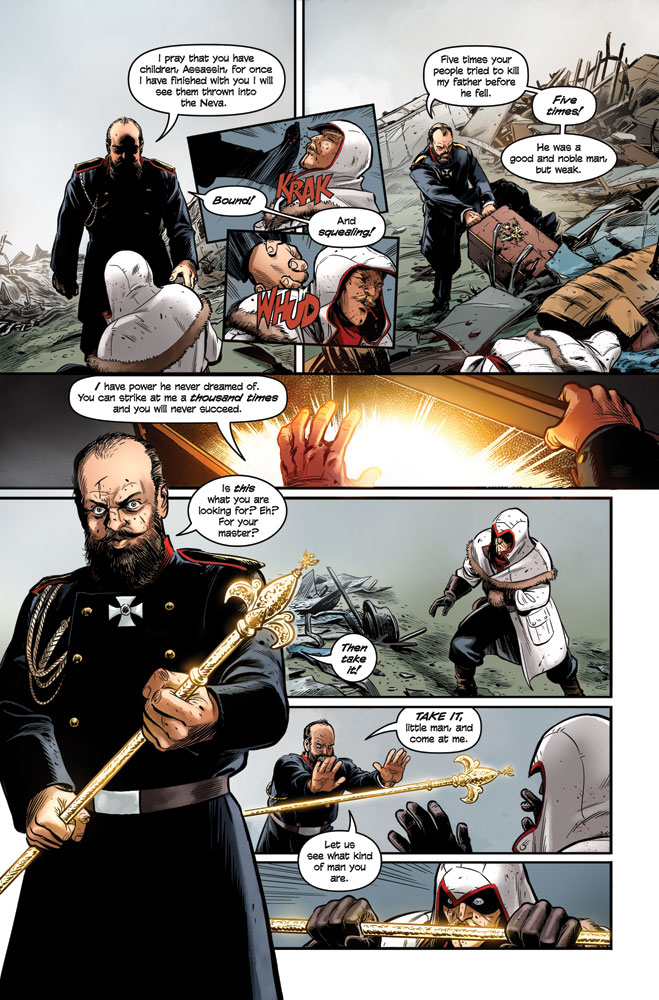 There’s also the added bonus of the story’s historical influences. The incidental characters are all based on historical figures which you can find in any history textbook. Names like Nikola Tesla, Alexander Tsar, and the Tunguska blast are all incorporated into the story. They are seeded in to blend the fiction with fact in attempt to make everything you read plausible.

The main reason to go out and buy the book is the last quarter of it. Yes, the reader will be able to read all three comics in the series, but it’s the additions and appendices after the tale that expand on the story and inspire the imagination. An entire section has been dubbed, “Behind the Fall,” and examines everything that went into making the book. There are behind-the-scenes looks at the artists and writers in various locales drawing and pairing, historical pieces about the faces in the book, thoughts behind the storytelling and character development, and even early sketches of characters like Cross and Orelov.

You’ll also be given 16 exclusive pages from the Assassin’s Creed encyclopedia. The encyclopedia covers everything from the assassin lineage to detailed biographies of assassins and Templars. There are pieces on the history of the organization and the assassin’s order. The depth of knowledge you’ll receive from the deluxe edition of this book is ridiculous, in the best way possible.

This is one of those books that’s too good of a deal to pass up. For $19.95, you’ll not only have three issues to add to your Assassins Creed shrine in your room, but you’ll also have an encyclopedia worth of knowledge to astound your friends with.