Men In Black 3 slinks into theatres this week with a pungent stench of bad press. The budget ballooned to rumored heights of $375 million, production stopped halfway through to radically rewrite most of the script, Will Smith spent his time on the New York set in a trailer bigger than most of the city’s apartments, and perhaps most worryingly the star didn’t provide a campy rap video to promote the flick (seriously Will, what’s up with that?).

It’s a blockbuster with disaster written all over it, but as a longtime fan of the fantastic first movie I entered the theater desperately hoping that somehow the threequel would manage to recapture the sci-fi comedy magic of the original. Well folks, unfortunately I just can’t say that’s the case. It’s probably a smidgen better than Men In Black 2 and thankfully isn’t worse than Battleship, but whoo-boy is this thing a mess. The endless production problems are visible all over the movie with a story so confusing it could only have been written by committee and jokes so stale that they must have been rewritten and questioned until all the laughs were sucked dry. I suppose the special are decent, but given that budget how could they not be?

The story returns Tommy Lee Jones and Will Smith to their black suits and Ray Bands to fight the scum of the universe. This time that particular scum is Boris The Animal, a one armed growling alien with a tiny monster in his good hand who breaks out of prison on the moon to seek revenge on Jones (aka the man who put him there). Well, Smith n’ Jones have kicked plenty of alien ass before so it shouldn’t be too much of a challenge, right? Well, it seems that way until Boris finds a way to travel back in time and kill off Jones at their last battle in the 60s. So, he’s wiped from existence and the only person who notices is Smith (who also has an irrational thirst for chocolate milk as part of the time paradox dealio, but don’t’ ask why because it’s never adequately explained). Weirdly, Boris’ plan concludes with an alien invasion 40 years later in Smith’s time (again, don’t ask. The Swiss cheese script is filled with far too many holes to worry about that), so he heads back to the past to stop future Boris and 60s Boris…or something like that. Once there, he meets up with Josh Brolin doing a spot-on Tommy Lee Jones impression as a younger version of the character and they embark in a little culture clash time travel comedy and alien ass-kicking. 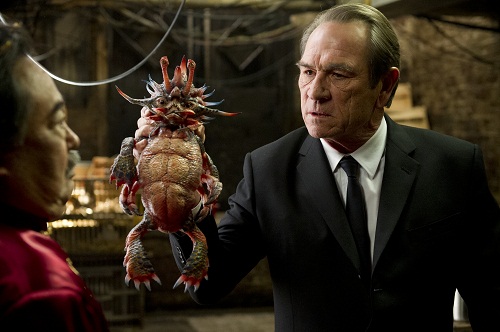 Now, only the scenes leading up to that trip to the 60s were planned before this movie went into production. When things shut down for radical rewrites, the studio tried to make it sound like it was just a brief flashback that needed retooling. Nope, it’s a full two thirds of the movie that definitely feels like it was thrown together in a rush. Brolin and Smith might be an amusing duo, but they are thrust into a confusing alien plot involving the moon landing that makes very little sense. As if there wasn’t already enough awkward plotting, the desperate screenwriters created a character who can see all possible permutations of reality, purely to tell the leads exactly what to do whenever the script gets trapped in a corner. It’s a big mess of a movie, but at least it looks like everyone involved was trying to make it work…well, except for Tommy Lee Jones who is clearly so disinterested in the whole endeavor that I kept expecting him to fall asleep in the middle of one of his few scenes.

Smith is of course at the center of every scene given that he’s Hollywood’s most consistently bankable star at the moment. One problem though, a decade of serious roles has robbed him of his comedy timing and even worse, you can’t really play the wisecracking young buck when you’re middle aged. Instead, he half-heartedly pulls some Fresh Prince faces and constantly makes uncomfortable jokes about being a good father as if the movie was an intergalactic episode of The Cosby Show. It’s pretty embarrassing to watch and with Smith getting so much screen time, everyone else in the cast is wasted. Emma Thompson and Michael Stuhlbarg are both talented actors with comedic chops, but all they do is deliver exposition. Flight Of The Conchords’ Jemaine Clement appears to be onto something as the snarling villain, yet never gets anything to do other than scream and look evil. The only two performers who make any impact are Josh Brolin and Bill Hader in a cameo role as Andy Warhol. Even there, those two guys are only decent because of their fantastic impressions and not the turgid jokes they had to deliver. Casting is everything in a comedy, so with no one in MIB III bringing much to the table, you can expect to get as many laughs out of this movie as a pediatric cancer wing on parents night.

Judged purely as a comedy, the movie would be a total disaster. However, it is a special effects driven blockbuster as well and at least delivers some modest pleasures there. The delayed production must have given the CGI and make up teams extra time to do their job because there are some spectacular monsters and set pieces throughout the film (particularly the time traveling sequences that involve jumping off of a skyscraper for no apparent reason). Director Barry Sonnenfeld may have lost control of the production, but he at least knows how to pace a story and pulled together something in the editing room that whisks by fairly painlessly. Men In Black 3 is definitely not the worst movie ever made or even the worst entry in the series, it’s just a mess that clearly was made for no reason other than to give Sony a recognizable summer movie franchise to launch in June. It’s a real shame, because all that money could have been used to make three original blockbusters instead and even if two of those tanked, Sony probably would have made more money than they will on this thing. This sequel is arriving on screens about 5 or 6 years too late as it is, so audiences would have only really gotten excited if there was something new and interesting to be done with the material. Had the entire movie been set in the 60s with Josh Brolin as a young Tommy Lee Jones helping found the Men In Black and the filmmakers were given enough time to, you know, write a script, this probably could have been a pretty entertaining fluff. That didn’t happen though, we got Men In Black 3 and it’s hard to imagine anyone getting excited about this limp, lackluster blockbuster. Looks like The Avengers is going to have another easy weekend to take over at the box office. Maybe breaking Avatar’s record isn’t out of reach after all as long as the competition keeps offering turds for the superhero mash-up to smash.

Men In Black 3 is definitely not the worst movie ever made or even the worst entry in the series, itâ€™s just a mess that clearly was made for no reason other than to give Sony a recognizable summer movie franchise to launch in June.