The Book Of Cain Review

The Book of Cain is intended to be a primer to the world of Diablo III. Designed to resemble a relic from the actual in-game universe, the book is supposedly written by Deckard Cain, who aided players in the first two Diablo games.

The Book of Cain is an A4-sized hardcover, with a cover designed to resemble leather and metal. In short, it’s designed to look exactly like something players would pick up in the Diablo universe. A more modern-looking, removable plastic band featuring the Diablo III logo wraps around the book, intending to serve as a bookmark. The utility of the bookmark sash is questionable, but it’s certainly a nice addition.

The pages are printed on heavy matte paper, made to resemble the stained parchment you’d expect to find in an ancient tome. Deckle edges complete the effect of a handcrafted guide, and the uneven pages serve as a constant reminder that the book is an item contained within the Diablo universe. Unfortunately, the heavy matte pages, likely chosen for durability, are too smooth and slippery to feel much like parchment. The result is that The Book of Cain feels like a professionally crafted artbook rather than an ancient relic passed down within a fantasy universe. Likewise, the text is printed in a fairly standard font, which directly conflicts with the handwritten style. 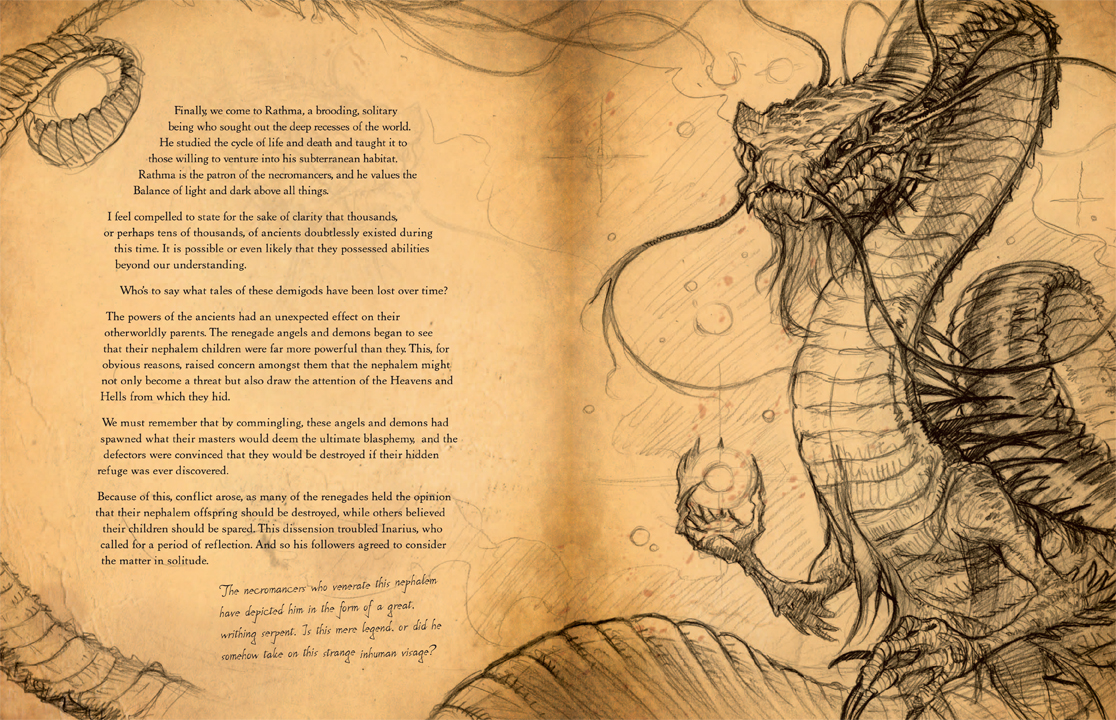 The varying styles will immediately tip off readers that many artists contributed to the creation of the book. The pencil-sketches found in many of the illustrations certainly resemble scribbling in a notebook, although the artwork is a little too tidy and “clean” to pass for any sort of rough sketch. All of the art is extraordinarily complex and pleasing to look at. The amount of detail packed into the illustrations is incredible, with textures being particularly notable. In keeping with the fantasy universe, colour is used very sparingly. When it’s employed, the colour takes the form of subdued imitations of hand painting.

A surprisingly hefty amount of text is packed into the book. Cain explores the mythology of the Diablo universe, including tales of battles between demons and angels, the ancient history of the Diablo universe, and the events of the first two games. Key characters are introduced, with particularly notable concepts being circled and written about in further detail by Cain. These notes are supposedly for his adopted “niece,” Leah, in preparation for the events of Diablo III.  The book ends with a quick run-down of the various locations and cultures in the Diablo universe. The Book of Cain provides a reasonably in-depth look at the game world, considering that the book is meant to be a single man’s collection of thoughts. As a final touch, a letter is stuck to the very end of the book, held together by a sticker masquerading as a wax seal. The letter contains a map resembling a ragged piece of parchment. Although the map is printed on the same paper as the book, the fake wear on the map is significantly more pronounced. The inclusion of the map is a nice final touch, but like the pages in the tome, it is thoroughly unconvincing as an imitation of weathered parchment.

The Book of Cain is very high quality, and is packed full of content for both newcomers and veterans alike. The quality of artwork and quantity of text are pleasantly surprising. The only issue with The Book of Cain is the overly-professional feeling pages, which may not necessarily be a bad thing.

The Book of Cain provides a reasonably in-depth look at the game world, considering that the book is meant to be a single man’s collection of thoughts.