The world of Skyrim, like so many previous Elder Scrolls titles, is immene. To fathom how many hours it would take one to completely scrutinize all corners of the in-game world is immeasurably difficult. Think you spent a lot of time with Persona 4? Skyrim can certainly rival that. So what’s next after creating an expansive, exhaustive adventure? Releasing DLC, of course.

Dawnguard is the first piece of DLC available via Bethesda for the massive adventure, and introduces a slew of new content for 1600 Microsoft points, which is roughly $20. The major appeal here is actually the titular Dawnguard, an ancient guild of vicious vampire hunters that many years ago disbanded after defeating many a rogue vampire. Now, in present time, the Dawnguard guild has been revived in order to combat the dark vampire lord Harkon. Harkon’s on a mission to completely black out the sun using the powerful Elder Scrolls. You can either put an end to his nefarious plans, or decide to betray your own kind and become a vampire. That’s where things start to heat up.

Once you’ve established whether or not you want to become one of the children of the night or to come to the Dawnguard’s aid, it’s time to get down to business. Choosing to become a vampire is a transformation not unlike that of the same beast form you may have acquired earlier in the game and is comprised of some intriguing abilities. As a vampire lord you’re able to disappear into a gaggle of bats, scurrying away into the darkness, grab targets and squeeze the life out of them, and employ levitation. You may switch between vampire lord form and back to normal at will, which actually proved quite handy, as well as intriguing when you take into account the new skill trees for both vampire and werewolf transformations.

Skill trees are available for use with skill points unlocked in some truly exciting ways: feasting on victims grants you achievements and experience to unlock special abilities. This can lead to hours of fun eating hearts, sucking down the blood of innocents, and generally making an unholy nuisance of yourself. I found myself quickly drawn to these vicious acts, until I brought myself to explore the extensive new surroundings Dawnguard brought with it.

Three main areas are packed into the update: the Soul Cairn (hands down the most visually arresting), Fort Dawnguard, and Castle Volkihar. The Soul Cairn is actually a massive plane of Oblivion in which you can if luck permits find a demon horse by the name of Arvak. Fort Dawnguard acts as a decent base as far as giant castle go — you can store armor and weapons there, using the locale as a second home (if you decide to exterminated all those pesky vampires, anyway) or you might opt for Castle Volkihar, if you chose to subsist on human blood for the rest of your days. We’re totally not judging. Both home bases are impressive visually and act as prime bastions from the dangers of the outside world. 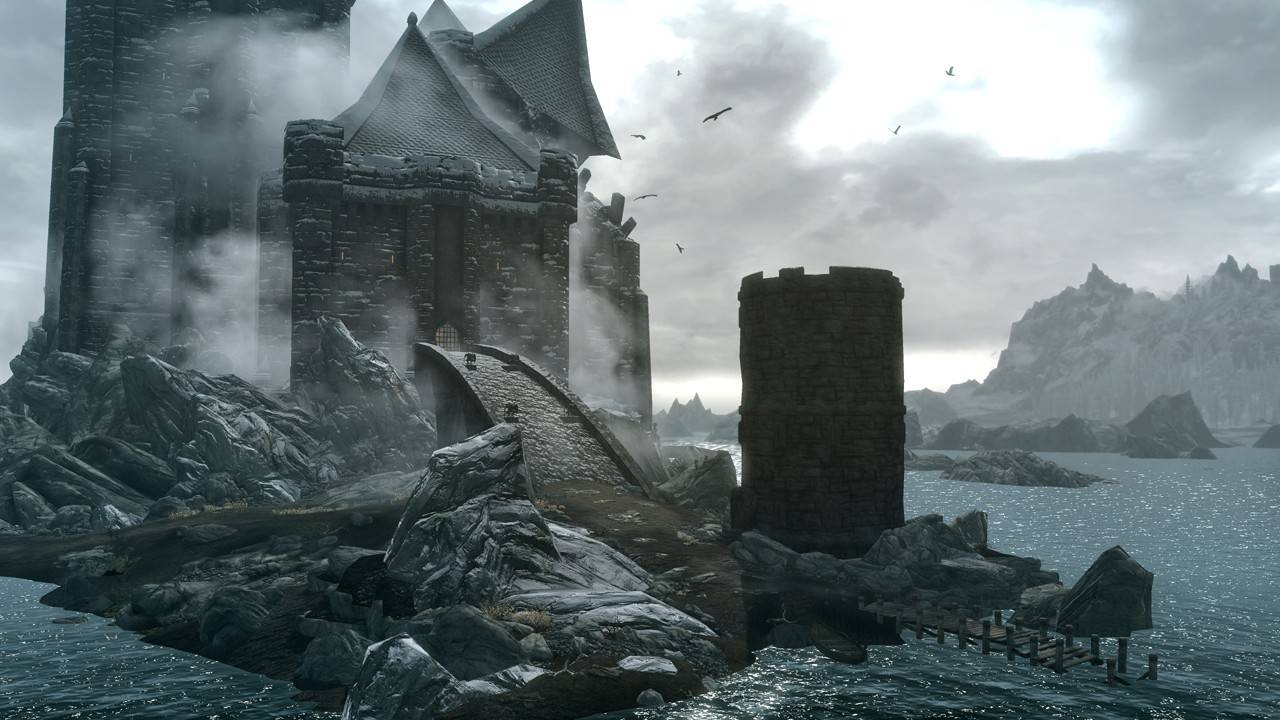 But what would a Skyrim expansion be without brand new weapons? Of note is a fantastic crossbow that archery lovers should eat right up, available via one particular Dawnguard member. If that isn’t your style, Dragonbone weapon sale and smithing should attract, if you’re looking for a viable alternative to Daedric offerings. Auriel’s bow is absolutely the way to go here, though, if you’re trying to exterminate Lord Harkon, and it’s required to defeat the vampire lord via usage of two types of additional arrows: Bloodcursed Elven arrows (if you’re a vampire) and Sunhallowed Elven arrows if you’re fighting in the daylight.

Depending on what side you choose to complete Dawnguard, you’re looking at a sizeable chunk of gameplay to slowly unravel. It can easily encompass 10+ hours of content, and more if you decide to play through both paths and unlock every single achievement available. There’s at least one opportunity to replay the campaign since both endings differ from each other, and if you’re going to drop the $20 we highly recommend getting all that you can out of this additional piece of heaven, er, Skyrim. If you’ve already shouted “Fus Ro Dah” until you’re (literally) blue in the face, take Dawnguard for a spin. Or a quick flight, if you’re on Lord Harkon’s side.

The world of Skyrim, like so many previous Elder Scrolls titles, is immene. To fathom how many hours it would take one to completely scrutinize all corners of the in-game world is immeasurably difficult.