Winter 2013 is starting to feel quite a bit like summer 1988 at the movies. Amidst all the Oscar glitz and glory, former Planet Hollywood action figures Arnold Schwarzenegger, Sylvester Stallone, and Bruce Willis have been releasing brand spanking new blockbusters as if a decade of disinterest hadn’t just passed them buy. Sadly, Arnie’s The Last Stand and Sly’s Bullet To The Head both bombed despite being decent action throwbacks, while Bruce Willis’ latest entry in the Die Hard franchise is about to become an inevitable hit despite being not only the worst release of the three, but the worst entry in a once proud franchise. The reason is sadly simple: brand loyalty.

The same folks who were apprehensive about watching Schwarzenegger test the waters with a new career will probably by a ticket for A Good Day To Die Hard because of the title. That’s really a shame because aside from that profitable moniker, the name John McClane, and a certain R-rated catch phrase, this movie really has nothing to do with Die Hard. It’s a generic seat filler unwisely branded with a popular franchise header and quite possibly the worst action movie you’ll see this year. And to think, there was once a time when the Die Hard series could be proudly labeled the best action franchise of them all. Too bad the 90s had to end.John McClane has become the very unstoppable action superhero that the character was created as an alternative to and is immeasurably less interesting as a result.

Screenwriter Skip Woods (who wrote the Hitman movie, just in case his name wasn’t irritating enough) doesn’t even bother with set up or characterization, instead having John McClane (Bruce Willis) sent to Russia within seconds of the movie starting to find his son. At first it seems his son might be a Russian mob hitman, which could have been an interesting action movie with an action hero icon trying to turn his son good. But nope, that’s a ruse. Jack McClane (Jai Courtney) is actually a CIA agent hidden deep undercover in the Russian mob. Why is he there? It’s hard to say because the script is so convoluted, but it’s got something to do with a nuclear arms heist involving a imprisoned old Russian heavy (Sebastian Koch) and his cat suit wearing model/murderer daughter (Yuliya Snigir). What actually happens on screen is almost irrelevant from that point on. The movie is really just about John McClane connecting with his son, much like how Live Free Or Die Hard was about John McClane connecting with his daughter. Why audiences are supposed to be looking for family values in a Die Hard movie is beyond me. These two post millennial sequels feel like a completely different franchise from the original Die Hard trilogy and it’s sad that the powers that be at Fox don’t even seem to even understand what makes their blockbuster franchise work.

John McClane used to be the one believable action hero of the 80s/90s action movie boom. Here was a guy who wasn’t a roid-popping killing machine or even Keanu Reeves, McClane was a working class cop who ended up in his terrorist fighting action plots almost by accident. He’d get hurt, screw up, sweat, and swear. We loved him for it and Bruce Willis felt like the Bruce Springsteen of machine guns. In a Good Day To Die Hard, McClane steps off the plane in Russia, immediately finds his hidden CIA son, and destroys a motor way full of cars trying to protect him. He’s become the very unstoppable action superhero that the character was created as an alternative to and is immeasurably less interesting as a result. Then of course we’re stuck with the modern Bruce Willis who now seems completely bored by and disinterested in the type of action movie that made his name. The actor who used to be a sparkplug of smirks on screen now barely even seems awake and treats his required killing and one-liner duties like a chore (it’s particularly sad to see this lazy Willis performance after he seemed to spring back to life in Looper and Moonrise Kingdom last year). He’s also barely even the lead in the movie, with most of the big screen fighting and villain bashing handed off to his son in Jai Courtney. I suppose Courtney is fine in the role, but it’s hard to tell because he has nothing to do beyond hero posturing. Perhaps the movie was intended to be a passing of the torch for the franchise, but don’t expect that to happen any time soon. And the less said about the cardboard stereotype Russian villains the better because Hans Gruber they ain’t.

The less said about the cardboard stereotype Russian villains the better because Hans Gruber they ain’t.

The one good thing that can be said about A Good Day To Die Hard is that it at least has a handful of decent action scenes. A metal-bending highway car chase, helicopter fight, and building destroying shootout do deliver some of the most expensive action a blockbuster budget can buy. So, that’s something. Unfortunately director John Moore (who also made the Max Payne movie if you need a reason to hate him) shoots all these scenes with disorienting Michael Bay-style shakey cam, so you can barely see or appreciate this action while it’s happening. So there you go, even the one successful part of the movie was spoiled. Yep, A Good Day To Die Hard is terrible and a new low for the franchise that officially jumped the shark once Bruce Willis took out a fighter jet single handedly in the last movie. The last two sequels have collectively erased everything that worked about the previous Die Hard movies so that now when Bruce finally shouts out his “Yippie-Kai-Yay” catchphrase, it comes as a disappointing reminder of past glories rather than a tip of hat. The only thing that the filmmakers got right in this turd is the convoluted title. At least it seems to suggest that everyone involved knows that this is a good place for the franchise to die.

The same folks who were apprehensive about watching Schwarzenegger test the waters with a new career will probably by a ticket for A Good Day To Die Hard because of the title. 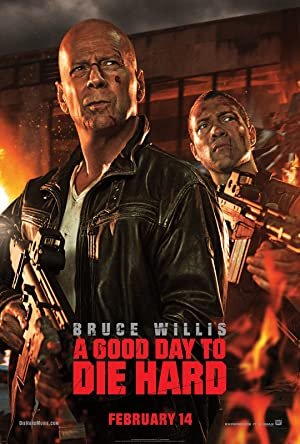