Gravity Rush, one of the marquee PS Vita titles, was the very definition of “potential” as far as games go. There was a lot to love in the 2012 release—a memorable heroine, winning art direction, and a central gameplay hook unlike anything on the market (Inversion notwithstanding.) That was enough for most, myself included, to overlook critical design flaws and an overall lack of polish. However, the release platform seemed to doom this potential franchise to a single entry—whatever potential was there would never be fully capitalized on. Imagine my surprise, then, that Sony is putting out Gravity Rush 2 as their first major release of 2017, and on their flagship system no less.

Also imagine my surprise that Keiichiro Toyama, the visionary who created Silent Hill, didn’t really see fit to fix any of the problems of the original title. One would think that with a bigger budget, a more robust platform, and more development time, Gravity Rush 2 would have been an extraordinary leap in technical polish and mechanical execution. Instead, what players are treated to is, essentially, more Gravity Rush on a larger scale.

Don’t get me wrong, there’s nothing particularly bad about more Gravity Rush, especially considering it had a snowball’s chance in hell of happening. But for Gravity Rush 2 to fail at fixing any of the key problems with its predecessor, and be satisfied with transposing the exact same mechanics to a new setting, is a bit risky. It’s risky because this was a chance to branch the franchise out to a wider audience, and instead, it’s a game made for people who liked the original and literally nobody else.

Luckily, I did like the original, and found myself pretty engrossed in this one as well. The much-improved narrative helps. I couldn’t tell you jack about what happened in the first Gravity Rush, for the most part, but Gravity Rush 2 does a fantastic job of establishing a cast of compelling characters and investing players in a surprisingly nuanced struggle. What could have just been whimsical silliness and anime tropes evolves into a high-flying tale about the dangers of gentrification, the role of the middle class in a capitalistic power structure, and other meaty topics.

No, I’m dead serious—Gravity Rush 2 has one of the more mature narratives I’ve seen in a big game recently. Oh, sure, there are silly bits where Kat finds herself in giant succulent gardens and swirling voids of rocks and mollusks, giant set pieces intended to look pretty and not do much else. But the core struggle, the message that Toyama is trying to impart on players is pretty great stuff, top to bottom, and delivered in a stylish fashion at a brisk pace. And yes, everything is told in that neat hybrid of French and Japanese made specifically for these games, which is charming in its own right.

If only the gameplay itself was as consistently charming. Yes, the core gravity shifting mechanics are basically sound—making Kat float, fly, and cling onto things basically works how it basically should. But the first game’s navigation issues—from a camera that wildly swings out of focus to odd collision detection throughout—remain intact. Getting Kat to land where you want her to, especially in the heat of the moment, is still an occasional chore, and even looking where you want to becomes a problem in some sections. Combat against larger enemies still feels like a floaty crapshoot, too, with aiming for glowing weak spots and kicking them becoming a guessing game of, “well, this should hit, let’s hope it does.” The good news is that combat against smaller enemies is fast, intuitive, and fun. Flinging monsters and enemy soldiers through the air is endlessly satisfying, echoing the good bits of The Force Unleashed.

Players also get access to new versions of Kat’s powers with the Lunar Style shifting. Lunar Style makes it look like Kat is walking on the moon, with the conceit being that her personal field of gravity is weakened. She clumsily strides 10 to 20 feet at a time, and can send herself rocketing into the air with reckless abandon. While they look kind of janky and broken, these new abilities are quite fun, and allow players to navigate the open worlds in a fun and unintentionally hilarious manner. At the very least, they’re a hell of a lot better than those As Seen On TV “Moon Boots” we all got suckered into as kids.

Gravity Rush 2 also does a good job of giving players more to do than “walk around and then fight stuff, then engage with a big ol’ setpiece.” There’s a lot of variety here, with main missions consisting of arena mini-games, timed target practice, and large challenge dungeons. Not every gameplay type is a winner, of course; a particularly awful stealth segment and a tedious “protect the villagers” bit left me more irritated than engaged. But for the most part, I appreciated the variety on display here, and liked that some effort was made to give players more to do with the core mechanics.

Yet that’s the operative phrase here: “with the core mechanics.” A bigger open world, beautiful graphics, and some new challenges don’t change the fact that Gravity Rush 2 doesn’t feel like much of a significant overhaul of its predecessor. The air-based combat still feels weird, the platforming still acts up, and that camera is still a thorn in player’s sides at time. Everything that didn’t work about the original doesn’t work here.

On the same token, though, everything that made the original so charming, so memorable, so beloved by a certain subsect of players is still here. That gorgeous art direction, these winning characters, and those astonishing musical pieces—it’s all still here, and with a much better narrative to boot.

So, is Gravity Rush 2 a perfect game, and the improvement upon the formula that I wanted? No, not really. But it is a pretty good one, and bound to be great to diehard fans of the original. In spite of some pretty major flaws that will throw off a wider audience, I’m grateful that this game exists, and I can only hope that the eventual sequel will be a bigger, bolder evolution of the original.

Despite a majority of the original’s flaws carrying over, Gravity Rush 2 is nevertheless a good game with a winning narrative and a beautiful art direction. 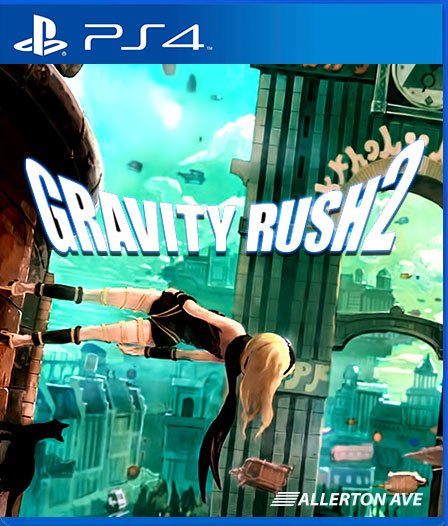