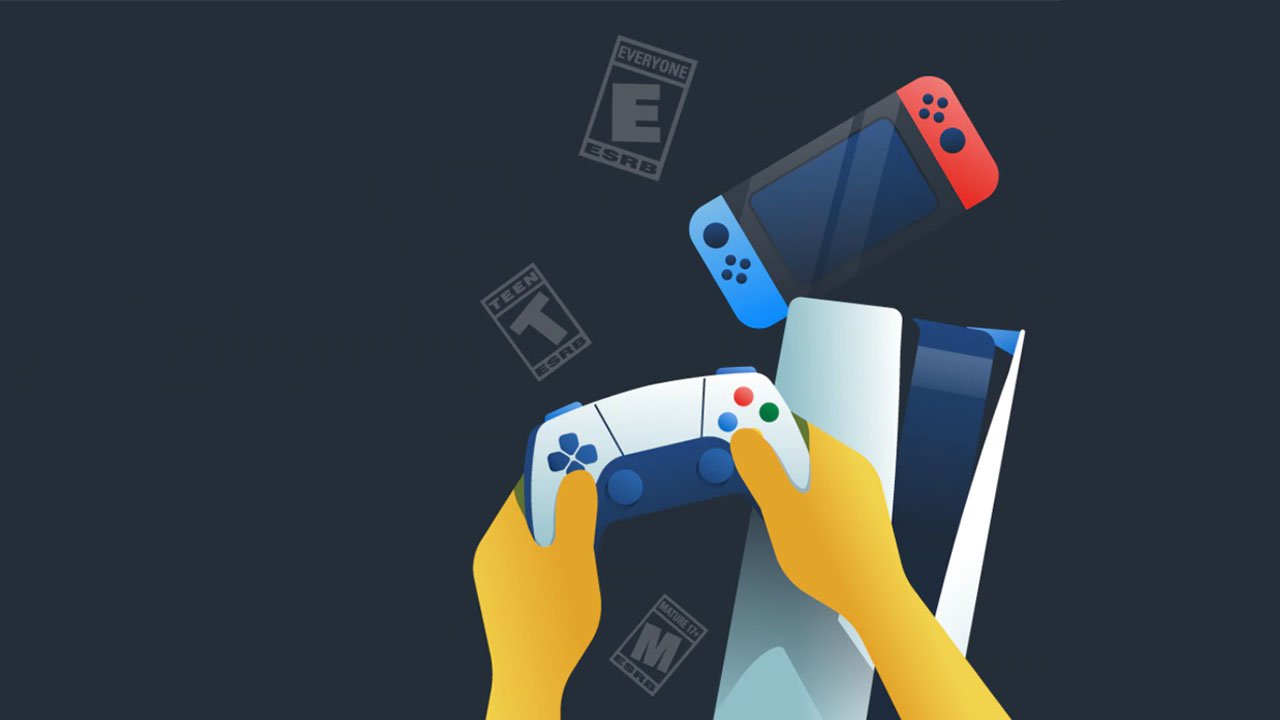 A Guide To ESRB Ratings

As any entertainment medium matures, it inevitably comes under scrutiny for the subject matter that it contains. A natural by-product of increase in mass appeal is the concern about whether or not something is appropriate for younger audiences. To this end, film has a rating system implemented by the Motion Picture Association of America, and music has the Parental Advisory Label system implemented by the Recording Industry Association of America. What parents must be aware of, though, is that videogames have a similar rating system enforced by the Entertainment Software Ratings Board, or ESRB for short.

As with the aforementioned bodies, the ESRB is a self-imposed system put forth by the gaming industry to provide at-a-glance information about expected subject matter in a game for both parents and retailers alike. While many parents may assume that videogames are little more than childish fun, this is a dangerous belief to hold of a medium that has grown to become the largest in global entertainment. In fact, with the gaming industry now dwarfing the film industry, it should be little surprise that both a cause and effect of this is an increased appeal to older audiences through more mature subject matter.

As with anything that children are exposed to, the responsibility falls to the parents to judge and regulate what is and is not appropriate, but the ESRB ratings system can help you to make better informed decisions based on the ESRB labels which, by law, must appear on the back of each and every game case sold in North America. These ratings range from Early Childhood (EC) to the dreaded Adults Only (AO), and will always feature a brief summary of the reasons why a game was assigned a particular rating.

While most vendors have policies preventing the sale of AO games, and similar policies regarding the sale of Mature (M) rated games to minors, parents should never underestimate the lengths that children will often go to in order to get their hands on the year’s hottest titles—such as the latest Call of Duty, Assassin’s Creed, Battlefield, or Grand Theft Auto—all of which carry an M rating. Always be sure to review the ESRB label on a game when shopping for children to decide if it’s appropriate, and always be suspicious if your child asks you to purchase a game for them. Chances are, if they want you to buy it for them, a particular store won’t sell it to them directly. And while employees at major retailers are supposed to inform parents if a game they’re about to buy for their child is rated Mature, everyone can make mistakes when it gets busy—especially around the holidays.

Of course, as a parent, you know best what your child is or is not ready to be exposed to, and the ESRB ratings are merely a guide, not a law, but it’s important to know what your child may encounter in a game. So, with that in mind, we’ve taken the time to elaborate on the various different ESRB categories that you can expect to see, and the games you might see them on.

Not a warning as much as a guide to notify parents that this title was designed with early education in mind. Literacy, shapes, colours, patterns, and early mathematics will frequently be the focus of EC titles, and chances are high that if your child has a favourite early learning program on television with a theme song that drives you mad, there’s an accompanying game in this category. This is where you can expect to find your Sesame Street, Dora the Explorer, and Bubble Guppies games.

This category is considered appropriate for all ages, and will also be where games start to feature mechanics that that are beyond the comprehension of very young children. It’s important to remember, though, that the ESRB does not rate games based on the intended audience of the gameplay, but solely on the appropriateness of its content. Some of the most challenging puzzle games, or abstract indie titles fall under this rating, yet manage to challenge even the most experienced of players. Some mild violence may be found in E titles, such as tackling in an NFL game, but it cannot be a focus of the gameplay.

These titles can include a little more cartoon violence as well as some timid steps into the world of mild language, mild suggestive themes, and crude humour, though nothing explicit. This category is also the one that typically sees the widest audience appeal, as much like a Pixar film, the childish content can be layered to maintain an appeal for parents as well. The most notable example of this is Minecraft—a title loved by children the world over for its simple and intuitive take on content creation. Beyond that, it features systems that offer a wealth of depth and entertainment for older audiences as well. This is also where you’ll find the most popular kids titles, such as Skylanders, Disney Infinity, and the wealth of LEGO games.

This is the first category that will see some blood accompanying its violence, but nothing excessive and no gore. Some swearing may also be present, but nothing too harsh. Generally suitable for ages 13 and up, Teen is also where suggestive themes become more overt, as characters can kiss each other and sex can be implied, but not shown. Similarly, mentions of drugs and alcohol may be present, but again, are never shown. Think of this as the gaming equivalent of an edited-for-TV action movie—players will understand what’s being inferred, but never exposed to it directly.

This is the big one; the one that parents (rightly) are concerned with, as well as where many of the hottest titles can be found.  Mature rated games can and often do include gratuitous blood, intense violence, gore, alcohol, tobacco, and drug use, dismemberment, intense language, nudity, and graphic sexual content.

So what does all of that mean, then? The language can be colourful, including the use of racial slurs in context. The violence and resulting gore will range from accurate reflections of real life to blatantly exaggerated, and gratuitous headshots are a recurring theme in many M rated shooters that are not only present but also rewarded. Characters may be shown naked, and sex scenes may be shown on screen, but as with R rated films, they cannot be pornographic in nature. Themes of racism, mass murder, genocide, war crimes, and rape may also be present.

Not all games in this category are smut and shameless violent exposition, though; in fact, most aren’t. As with film, many videogames earn this rating—characterized by its intent for players 17+ —as a product of its inclusion of one or more of these elements, rather than a focus on them. While a game like Grand Theft Auto frequently seeks to push the boundaries in terms of what is and is not allowable by censors in much the same way that South Park does, something like the new Tomb Raider might implement its M-rated themes in a tasteful manner to better develop its main character, Lara. As always, context is important, and it’s up to you the parent to decide when is the right time for your child to start to learn about these themes.

The final category on the ESRB list of ratings, and one that parents should never encounter under normal circumstances. Every major retailer has an explicit policy to not carry any titles featuring an AO rating, which means that this is only of concern to parents who may be buying from a vintage re-sale store or digitally on PC. Even then, as less than 50 titles have ever been certified as AO by the ESRB, they are extremely rare. That being said, nothing is off the table with these games, and they are often pornographic in nature. If you have to ask, it’s not appropriate.

A Note on Digital Distribution

The ESRB is an institution that certifies games for retail sale. As such, its influence does not extend into the realm of games that are distributed solely on digital services on PC. Digitally distributed games on PC can be sold freely and without rating. With the dramatic increase in popularity of the digital distribution service Steam, as well as the PC-only titles that it often sells, the question of appropriate content becomes a muddied one at best. This is only further complicated by the ease of sale and distribution of independently produced titles on other services, or even via the developers’ own websites.

Whether on Steam or a private website, nearly all games will feature an About section, as well as a series of screenshots and videos that attempt to showcase their games to potential buyers which may help with identifying violent games, but will often fail to reflect other mature themes that may be present. When in doubt, a quick email to the developer via their website can help to determine whether a game is appropriate or not.