After nearly a decade since its original release, the premiere modern shooter franchise returns with Call of Duty: Modern Warfare Remastered. Available exclusively with the Infinite Warfare Legacy Edition as a pack-in title, Modern Warfare Remastered flooded my mind with feelings of nostalgia for one of the most addictive arcade shooters I played as a child.

Aside from the noticeable jump in graphics, lighting and resolution, Modern Warfare Remastered plays exactly like the original, which is a relief for many fans returning to give the Call of Duty franchise another chance. From the M9 pistol sharing ammo with the MP5 to the M40A3 ACOG combo killing anything in one shot, even the exploits and bugs players used to take advantage of remain untouched. I’m so happy that Raven Software treated this release of Modern Warfare as nothing more than a graphical update because messing with any of the gun balancing or perks would have made the title feel unfaithful to what gamers experienced in the past. 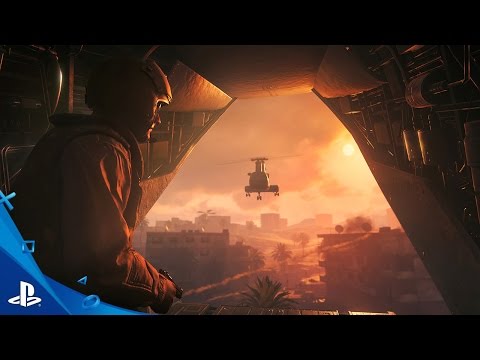 Enough of what returning players can expect though, because a whole new crowd of gamers are going will soon be populating the servers. Modern Warfare Remastered’s campaign places you in the dual roles of British S.A.S recruit, Soap Mactavish as well as a marine within the American Armed Forces. Under the command of the legendary Cpt. Price, your squad is at the forefront of stopping a returning terrorist threat from plunging the world into a bed of chaos and war.

Despite being critically acclaimed for its time, Modern Warfare’s campaign hasn’t aged well. Compared to the cinematic blockbuster experiences offered by newer shooters, the moments that were designed to shock and awe the player just don’t carry the same feeling of amazement and intrigue as they used to. Raven Software has touched up these moments by adding more effects, but at the end of the day the majority of the campaign does feel outdated, especially the poor writing.

However, the most infamous mission in Modern Warfare’s campaign, “All Ghillied Up”, remains one of the best levels in any shooter campaign I’ve ever played. The feeling of tension and suspense players feel while stealthily infiltrating the radiation filled city of Chernobyl builds up at a steady pace until they reach the climactic moment when they must assassinate the target. It’s a timeless mission that I recommend any gamer experience if they get the chance.

At launch Modern Warfare Remastered’s multiplayer give players access to 10 of the 16 original maps, with the rest coming in a free December update. While most competitive shooters these days have stepped away from asymmetrical map design, I loved revisiting maps like Crash, Overgrown, and Vacant because they felt so fresh to experience again in comparison. I felt right at home picking up classic weapons like the 3-burst M16 and the powerful AK-47. Some of the more hardcore players might be disappointed with the fact that the sounds of Modern Warfare’s arsenal have all been changed, but it didn’t bother me much because the recoil and feel of each weapon remains identical to the original.

Some cosmetic aspects of multiplayer have been changed with Remastered’s release. Most notably, the screen can quickly become flooded with in-game emblems representing how well you’re performing in game. It’s an artificial way of extending player rewards, but I dislike the overall inclusion. Sometimes I had five or six emblems rapidly appear when I was going on a kill streak and it would throw off my concentration when I was trying to track targets. Thankfully this feature can be turned off in the in-game menu, which I highly recommend any competitive player do.

It’s hard to pinpoint what makes this game’s multiplayer still feel so addictive, but I believe it has to do with its purity. Unlike Infinite Warfare, Modern Warfare Remastered remains a simple but effective shooter where players are rewarded for their skills and tactics instead of unbalanced abilities and lucky RNG. Sure, some perks are annoying—like Juggernaut and 3x RPG’s—but instead of creating an ability that just counteracts another, Modern Warfare provides you with a different tool that can be utilized to beat them.

Call of Duty: Modern Warfare Remastered is clearly the superior piece of the Infinite Warfare package. My key criticism against Infinite Warfare was that by implementing so many different mechanics and features without proper balancing, the core gameplay loop that the franchise was known for in the past suffers immensely. This was the game that created the definitive arcade shooter experience that so many publishers tried to replicate, but failed. Activision should take out their notepads and look at Remastered with locked eyes, because this is what a great Call of Duty looks like.

Call of Duty Modern Warfare Remastered’s campaign might feel outdated by today’s standards, but its multiplayer remains as addictive and fun as ever.
REVIEW SCORE
8.5
File Under: Activision Blizzard, Call of Duty