On April 4, 2013, Adam Orth, one of Microsoft Studio’s creative directors, did a bad thing on Twitter.

He, in a series of bluntly worded tweets, hinted that the upcoming Xbox console will require a permanent Internet connection to function and that anyone who saw this as a problem should, according to a particularly memorable tweet, “get with the times and get the Internet.” After fielding a few responses from Bioware’s Manveer Heir, Polygon’s Arthur Gies and other users with variations on the dismissive #dealwithit hashtag, Orth set his Twitter account to private and left those interested in the debacle to discuss among themselves. 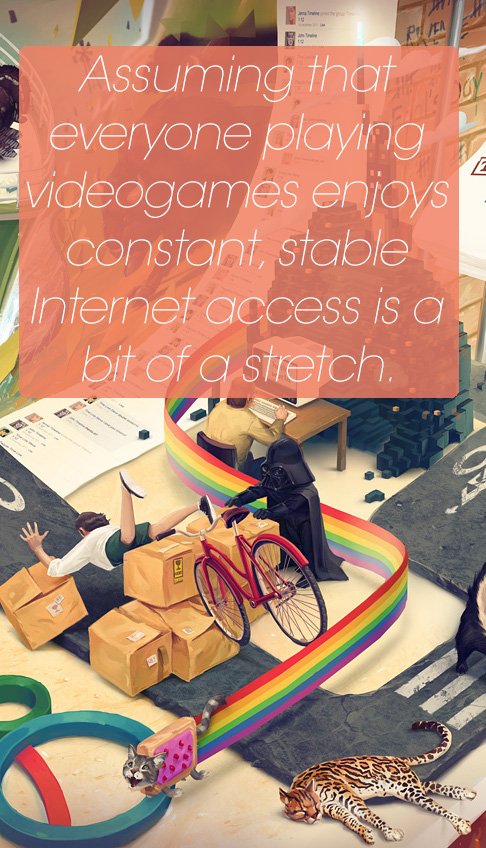 Most of the outrage surrounding Orth’s tweets has centred around the fact that his statements —statements that, due to his position at Microsoft, have pretty considerable weight to them — indicate that the new XBox (codenamed Durango) would definitely require an omnipresent Internet connection. The potential inconveniences of a console that stops working during a connection outage are worth considering, but even this is less of an issue than the one raised by others who point out that assuming that everyone playing videogames enjoys constant, stable Internet access is a bit of a stretch.

They’re right to be worried. Considering that even nations with advanced technological infrastructure like Canada and the United States are full of areas where reliable high-speed Internet isn’t available — and that both nations, as generally wealthy as they are, have populations where many people are unemployed/underemployed/underpaid — it’s a good idea to care about how audiences who fall outside the bracket of financially comfortable urbanites will be able to interact with game consoles in the future.

Videogames are in a strange position now, currently being accessible as either an expensive or fairly cheap pastime. On one end of the scale players may purchase pricey consoles and $60 games with bandwidth-intensive multiplayer components; on the other, it’s possible to use a cheap computer and a barebones Internet plan to run Twine, Flash and some free-to-play titles. Over the last four or five years the folk and punk movements in independent games have embraced the latter end of the spectrum, making videogames a viable form of entertainment for many who may not have been able to afford them otherwise. Those who wish to play mainstream games can also, at present, buy a console along with used games and enjoy any number of popular titles without having to stress about their system contributing toward a monthly bandwidth cap.

All of this is to say that videogames have, in recent years, become more accessible than ever before. An always-online console represents a step backward, telling potential buyers who live in rural areas where broadband is inaccessible or those who may not be able to afford expensive internet plans that they have no place in the future of the medium. Adam Orth, in suggesting that only a certain type of person can use Durango, offers a level of classist arrogance that the industry hasn’t witnessed since Sony unveiled the PlayStation 3’s original $5-600 price point at E3 during the beginning of a global recession and attempted to pre-empt complaints regarding its extravagant cost by stating that people should be willing to “work more hours to buy one” of the overpriced systems.

I owe credit to Luke Plunkett’s April 4 2013 coverage and citation of the tweets on Kotaku (Microsoft Creative Director ‘Doesn’t Get the Drama’ Around Always-Online Consoles, Devices). It was a handy reference to the whole debacle. http://kotaku.com/microsoft-creative-director-doesnt-get-the-drama-aro-470793216