It’s that special time a year again. Another Toronto International Film Festival has wrapped up, and even though the festival issues its own awards that people actually care about, we here at CGM like to go our own way.

After sampling a huge chuck of all the tasty cinematic morsels TIFF served up this year, we need to let the world know what they missed out on. These awards range in title and quality. This isn’t just a matter of dubbing the best of the best, though. We also want to acknowledge stupid movies, crazy movies, strange movies, and magically bad movies that made the viewing marathon so special this year.

Buckle up, people – TIFF 2016 was a wild ride. There were movies sure to be remembered as some of the best of the year. There were insane oddball efforts that will cause confused elation for years to come. There were gory splatterfests that made audiences pass out. There were pretty explosions. There was art. There was crap. There was a movie with Nicolas Cage. It was a rollercoaster of good taste, bad taste, and sheer cinematic absurdity.

We laughed, we cried, we squealed, we gagged, and somehow we never fell asleep. Please enjoy this utterly biased and lovably eccentric guide to the Best of TIFF 2016. I can’t believe it’s over: sniffle, sniffle, snooze.

Quebec director Denis Villeneuve continues to thrive in Hollywood with this artful take on the alien invasion genre. It starts with the set up from Independence Day as mysterious alien ships suddenly appear all over the world. Then the film gradually evolves into something far more complex and beautiful, peaking with a pretty amazing narrative trick that toys with film language. Toss in some incredible (and creepy) special effects and a strong performance from Amy Adams and you’ve got a sci-fi blockbuster that should also be an awards contender. The Blade Runner franchise is clearly in good hands with this filmmaker.

Winner of this year’s People’s Choice Midnight Madness award, Free Fire is a tense and hilarious blast of action filmmaking from the great Ben Wheatley (Kill List, Sightseers). The simple premise of an arms deal gone wrong between the IRA and Boston lowlifes in the 70s is executed with the craft and care of an early John Carpenter picture. Toss in a fantastic cast including Cilian Murphy, Sharlto Copley, Brie Larson, and Armie Hammer and you’ve got a B-movie with A-level execution. This thing has “cult hit” written all over it. The only thing missing is the audience. They’ll find it.

I feel incredibly odd to be on the defensive about Blair Witch following crap reviews and underwhelming box office. However, what Adam Wingard and Simon Barrett accomplished with this franchise reboot is so damn impressive that I’m certain opinion of this flick with only grow over time. The final forty minutes is a relentless funhouse thrill ride guaranteed to make audiences squeal. As soon as the right people see the movie and pee their pants accordingly, this movie will be beloved.

Paul Verhoeven (Robocop, Showgirls) made what can only be described as a French dark comedy about rape. ‘nuff said.

Best Stupid Movie: The Ring Vs The Grudge

There have been a few attempts in horror history to revive a pair of old franchises by making them fight. Rarely have they lived up to the hype. Pitting the VHS ghost of The Ring against the cursed spirits of The Grudge seemed too weird to work, especially since those slow burn franchises aren’t exactly built for goofy genre games. However, the folks behind this one went out of their way to acknowledge how silly that idea is and serve up audiences nothing but goofy n’ ghostly entertainment. It’s no masterpiece, but it is an absolute blast. Anyone tickled by this dumb idea shouldn’t be disappointed.

British cult comedian Alice Lowe made a hell of an impression at TIFF a few years ago with her caravan serial killer romantic comedy Sightseers. She may have even topped that oddball idea by playing a pregnant mother-to-be whose unborn child insists on her killing everyone responsible for daddy’s death. Bleakly funny, yet heartbreakingly broken, Lowe delivered a character that’s never been seen before. It was an amazing comedic and dramatic turn that should hopefully help the actress get a little more attention outside of the UK. Sickos with a sense of humour should love it.

The brutal dystopian allegory The Bad Batch was a movie with its share of problems. However, one thing it got write was casting Jim Carrey as a silent desert wonderer with a shopping cart full of junk and a beard full of filth. Carrey disappeared so thoroughly into the role that I honestly spent the entire film wondering who this odd non-actor was that the filmmakers found somewhere in the streets. It’s one of his strangest performances to date and given that this is Jim “talks from his bum” Carrey we’re talking about, that’s really saying something.

Yep, Nic Cage is back at it again. This time in perverse crime comedy from Paul “Taxi Driver” Schrader. Cage plays a lowlife who kidnaps a baby and is obsessed with Humphrey Bogart. Obviously, he goes big. Thankfully, it’s a trashy comedy so all of the man’s magnificent overacting is supposed to be played for laughs rather than getting giggles by accident. By the time he starts doing scenes entirely in a bad Bogart impression for no particular reason, you’ve just got to stand up and applaud Cage for being Cage. This man is insane and thank god he’s around. Bad movies wouldn’t be nearly as interesting without him.

The movie that made headlines because someone apparently passed out at the Midnight Madness premiere. Well, that’s certainly overstating the shocks. Still, Julia Ducournau’s debut feature takes a both funny and freaky approach to using irrepressible cannibalism as a metaphor for burgeoning female sexuality in a college setting. Good stuff for those who enjoy extreme French cinema and vintage Cronenberg. Bad stuff for folks made queasy by gore. Either way, just try to scrub the imagery from this flick out of your mind once you’ve seen it. Can’t be done. There’s no way you’ll faint though. That’s just ridiculous.

Peter Berg’s disaster movie about an offshore oilrig that catches fire seemed like an odd choice to premiere at a film festival until I saw it in IMAX. Easily one of the most viscerally thrilling disaster flicks in years, it’s a breathless bit of entertainment. The spectacle is astounding, demanding the biggest possible screen. Surprisingly, the human drama is actually worth the price of admission as well with Mark Wahlberg actually trying, Kurt Russell classing things up as always, and John Malkovich committing to his most ridiculous accent since Rounders. Sill you’ll mostly want to see this for the fire and explosions and good lord were they ever pretty. Find the biggest screen possible and veg out, people!

With Old Boy under his belt, director Chan-wook Park has long since established himself as a master of the unforgettable twist. Yet with his latest potboiler, the guy goes even further and twistier than before. His lesbian drama seems comparatively tame for an hour, then a secret is revealed and Park plays the entire movie over again from a different perspective and suddenly every quiet moment seems far more dark, twisted, and perverse. It’s a wild filmmaking experiment and thankfully Park is just talented enough to pull it off.

As always we round things out by honouring the movie that made more audiences shake their heads in disbelief than any other. It comes from action movie pioneer Walter Hill (the writer/director of such classics as The Warriors, Southern Comfort, and 48 Hrs.) and the script originated in the 70s when this subject wasn’t nearly so sensitive. Michelle Rodriguez plays a hyper masculine hit man who is kidnapped by a psychotic plastic surgeon (Sigourney Weaver) and involuntarily turned into a woman. Yep…you can’t do that anymore. Yet, Hill went for it anyway and delivered an absolutely tasteless action movie that’s either gleefully campy or just plain offensive. It’s hard to say. Either way, you kind of have to see this thing to believe it. Who knows how this thing got made or if it will ever get released? 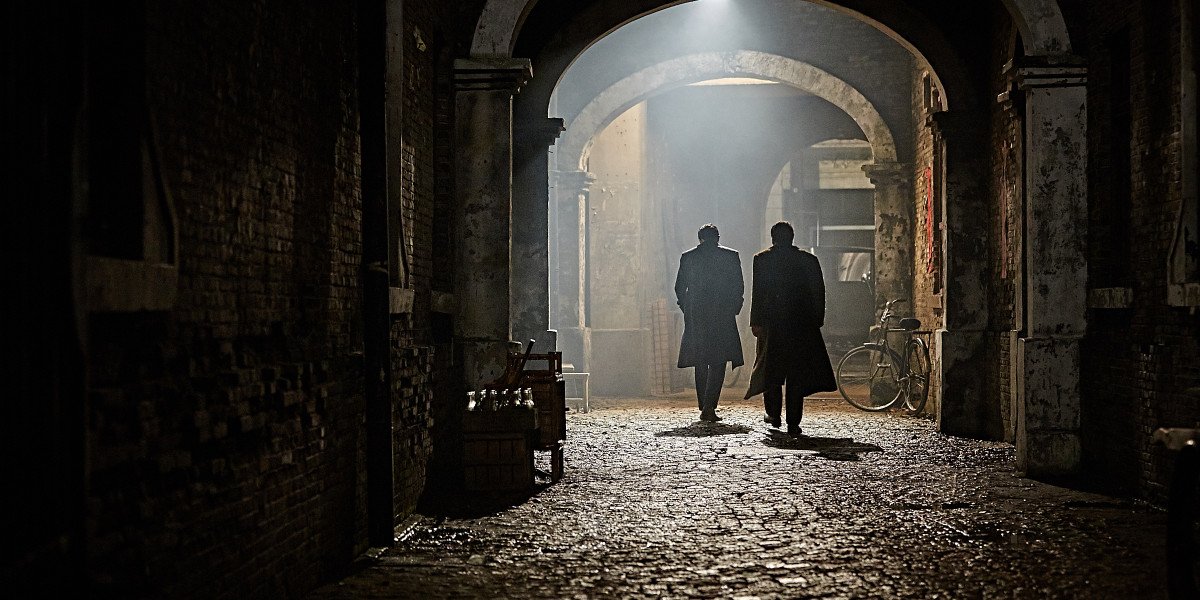 As dedicated as we are to giving out as many ridiculous TIFF awards as possible, we can’t always fit in every movie that we want. So here are a few movies that at least deserved a mention even through they didn’t win one of our remarkably prestigious awards (note: CGM gives out no prize or trophy, the winners will not be notified, and every single choice was selfish with no voting process or vetting).

Age Of Shadows: A stunning epic action flick from Korean master Kim Jee-Woon (I Saw The Devil) that proves period pieces can and should be ridiculously entertaining.

The Belko Experiment: A mixture of Office Space and Battle Royale from James Gunn (Guardians Of The Galaxy) and Greg McLean (Wolf Creek) that proves horror/comedies can be downright nasty if necessary.
Mascots: Christopher Guest (This Is Spinal Tap, Best In Show) finally returns with another mockumentary and though it is far from his best, this is still funnier than most comedies you’ll see all year. Cue up your Netflix early.

Rats: A documentary about Rats from Morgan Spurlock (Supersize Me) that uses horror movie grammar to deliver some absolutely disgusting imagery. It’s not much better than a typical nature documentary, but shock value runs high so be sure to check it out if you want a good gag.