Call of Cthulhu E3 Preview – Bringing The Mythos to Life

The Cthulhu mythos has always been ripe for exploration. It is a universe filled with ideas, and up to this point, few games have explored these worlds to the fullest. Cyanide Studio, with their attempt to adapt the pen-and-paper RPG to the interactive medium, has managed to make me a believer and eager to see more of the dark and twisted universe of Cthulhu.

You play as a turn-of-the-century investigator, Edward Pierce, as you look into the deaths of the famous artist Sarah Hawkins and her son and husband, all of whom died in a mysterious fire. Much like all Lovecraft stories, the start of the game seems routine until the madness of knowledge takes hold. As Pierce investigates the deaths, the player uncovers clues to that will slowly give them a greater understanding of what happened to the family. In the Cthulhu universe, the downside of knowledge is madness, so as you learn more, your grasp on sanity slowly erodes.

From the first moments, the love of the Cthulhu mythos was on display in almost all facets of the game. Based on the pen-and-paper RPG, Cyanide has carried over much of what players love about the game, building a complex, exciting, and challenging experience where you must ultimately lose your sanity to understand the truth of what is going on.

The demo showed off two distinct sections of the game, starting with the investigation at the Hawkins Manor. Soon after you arrive on the island you will be approached by the groundskeeper, leading to one of the many branching dialogue sequences. At this point, Pierce is forced to use his wits and the clues he has already uncovered to gain the trust of the groundskeeper and ultimately gain access to the manor. Once you enter the manor the game becomes reminiscent of other modern adventure experiences, as you explore the house for hints to try and get a deeper understanding of what horrors took place before the fire. As the demo progressed, the clues painted a picture that the fire was no accident and that much more was taking place beneath the surface than the police report suggests.

The second section on display at the E3 Demo was a look further into the game, where Pierce must deal with a creature that has escaped from one of Sarah Hawkins’ paintings. Call of Cthulhu is a game based on the Cthulhu mythos, and as such you have limited ways to take down the creatures that stand in your path. It is much more about using your wits and the world around you to your advantage—you will always lose a one-on-one fight with these creatures. This section of the game also displayed the concept that as Pierce gains more knowledge, he loses his grip on sanity and will develop phobias. These could include a fear of closed spaces; so hiding for long periods of time will lead to your death. 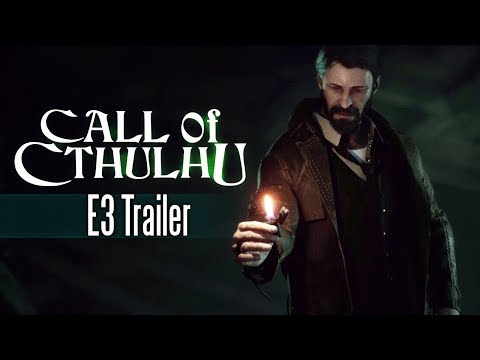 These touches bring the feeling of the pen-and-paper world to life. Call of Cthulhu is not a power fantasy, you are a regular human facing the mythic, and all you can do is run and hope to survive. It is a game that from first glance manages this capture that feeling of powerlessness and wrap you in the mythos that Lovecraft is known for. With the slow loss of sanity, you as the player have a better sense into what Pierce is experiencing and how the quest for truth takes a toll on him.

While the game still has a little way to go before it is ready for public consumption, what was on display was promising. It manages to capture the horror and insanity of Lovecraft while building a world that begs to be explored. The attention to detail on adapting the pen-and-paper RPG is evident and if done right this game will be an engaging RPG to sink hours into. With multiple paths and a rich story experience, Call of Cthulhu is shaping up to be a game that fans of the Mythos will want to give a look when it releases later half of 2017 for the PS4, Xbox One and PC platforms.