DrinkBox Studios just announced that Guacamelee! 2 will launch for the PS4 on August 21.

The news comes with a trailer, too, where Juan Aguacate is wearing his luchador mask fighting a new threat. Unlike Carlos Calaca, who he defeated many years ago, Juan fights against the very fabric of time and space itself.

Players will get to punch their way to a new  Metroid-vania style world while on the quest to save Mexiverse.

Different from the first game, which launched in 2013, Guacamelee! 2 has a lot more chicken, making Pollo power reign supreme.

For instance, players can turn into a chicken and go right through a tiny tunnel that their human form could not traverse. If a giant purple block gets in the way, then Pollo Shot can smash through it. This move can also ricochet players off bouncy walls, propelling them to freedom. Players who encounter an orange block can smash it again, but this time, with a well-executed Pollo Slide. As for the Pollo Glide, it allows players to use air currents to their advantage and gain new heights.

Guacamelee! 2 also has trailers for the player as they progress through the world. When players complete trainer challenges, they will receive an upgrade along with new abilities. Fitness can be trained with Doña Chamoya, while beaks could be sharpened thanks to Rooster Ramírez. For grappling move upgrades, a visit to Coscorrona will do, while punching can be upgraded under the tutelage of Uay Coco. For players who would rather fight with finesse, Flame Face is the one to visit.

DrinkBox Studios also announced that Guacamelee! 2 is jam-packed with so much content that it has become an adventure like never before. 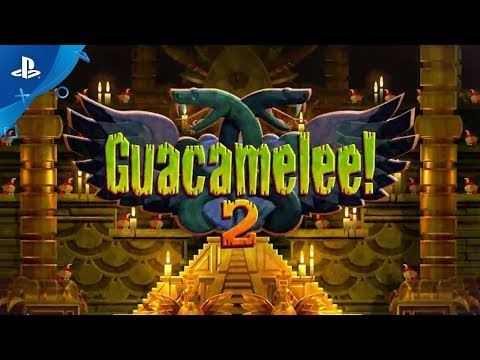 Although the team had to create a much larger game than originally planned, they are hyped for players to finally be able to experience all of it soon.

Liked this article and want to read more like it? Check out Zubi Khan’s article on Guacamelee! 2 for the PC.