Ubisoft has just announced that For Honor is getting a third season that is going to launch across all platforms on August 15, 2017. The new season will bring new maps, heroes, gear, ranked play, and a host of gameplay updates.  The maps and gameplay updates are free to all players at the start of season three. The two new heroes will be available for Season Pass holders on August 15 while all other players will be able to unlock them in-game on August 22.

The never ending war between Knights, Samurai, and Vikings continues in For Honor and two new heroes are taking up arms. The Highlander fights for the Vikings as he wields his claymore in pure fury. Meanwhile, the Knight’s have a new hero in the Gladiator. An agile fighter who wields a trident. You can check them out in the trailer below. 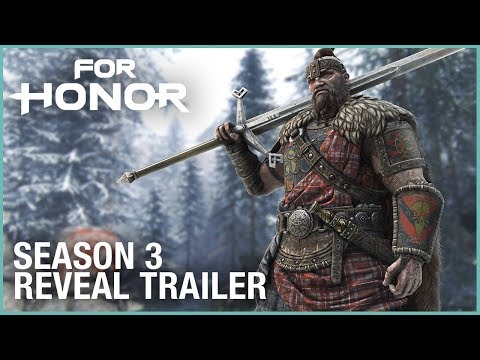 The Highlander is the newest hybrid character to join the Viking’s roster. Able to switch between forms, the new character brings with him new tactical options. The defensive form focuses on counter attacking and trading blows with their opponent. The offensive form lets them unleash their deadliest attacks but at the expense of blocking. Their claymore is the heaviest and longest sword in the game bringing with it a deadly combination of strength and range.

Meanwhile, the Gladiator is a skilled killer. Fighting in coliseums to make a living, they have honed their skills. They now bring those skills to the battlefield. With their trident and shield, they are agile opponents. They wear little armor and are able to punch their opponents to create space to setup attacks and stuns. Coming with a larger stamina bar and reduced cooldown times make for a fast and deadly opponent.

The two new maps bring with them environmental hazards that fighters are going to have to learn how to overcome lest they fall prey to the danger.

Along the new content, there is a new 1v1 tournament mode and a 4v4 ranked mode. These modes will offer players a chance to gain higher rankings and compete for exclusive tournament rewards.

For more information on the new patch, head on over here.

File Under: For Honor