On the surface, Pacific Rim appears to be a simplistic film: gigantic Rock’em Socke’em Robots vs a bunch of Godzilla-like monsters. But delving deeper into the story, it really was about the connection between two people. That connection was not just the solution for defeating the abominations rising from the deep but something we, the audience, can latch onto when surrounded by towering visuals. Once more, this idea is the premise for Legendary Comics’ series, Pacific Rim: Tales from the Drift.

The film, released in 2013, was the brainchild of Travis Beacham, who came up with the story and co-wrote the script with Guillermo Del Toro, who also directed. The movie takes place in the 2020s, where huge, sea dwelling beasts called Kaiju have sprung up and are attacking the world’s coastal cities. The only defense: the Jaegers, giant robots manned by two pilots, both connected to one another through their minds. 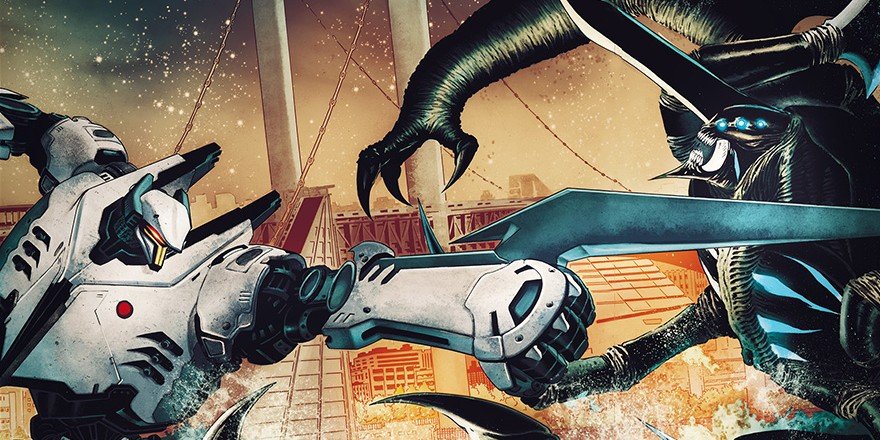 Pacific Rim: Tales from the Drift is a four issue comic series set years before the events of the film. Travis Beacham is back, developing the story ideas for this prequel chapter in the Pacific Rim world, which should delight fans of the movie. It is one thing to get a side story from a world you enjoy, it is another when that story comes from the architect of the world itself.

The series begins where it should, with a huge battle between a Jaeger and a Kaiju in the waters just on the edges of a coastal city. It is here we learn about the two Jaeger pilots, Kaori and Duc. They have a deep, loving bond—one that is written so well by scriptwriter Joshua Fialkov, it consistently propels the story forward. While in the drift (where one member of the Jaeger team can enter the mind of his or her co-pilot) we learn about how Kaori and Duc came together and what happened in their lives to bring them to fighting a Kaiju. “The deeper the bond, the better the team can fight”, a line from the movie that rings true throughout the comic series.

The major drawback from the four issues is something readers wouldn’t expect. It’s the action. One would think this aspect would showcase some of the greatest moments of the comic, but it’s the biggest detriment. During the battles between Kaiju and Jaegers, the panel positioning on the page and action sequences are hard to follow. This detracts from the flow of the story. For this reviewer, it was disorientating and distracting. While reading a comic, pausing to get a better look at images you admire is one thing, but stopping to decipher what exactly is going on is another. 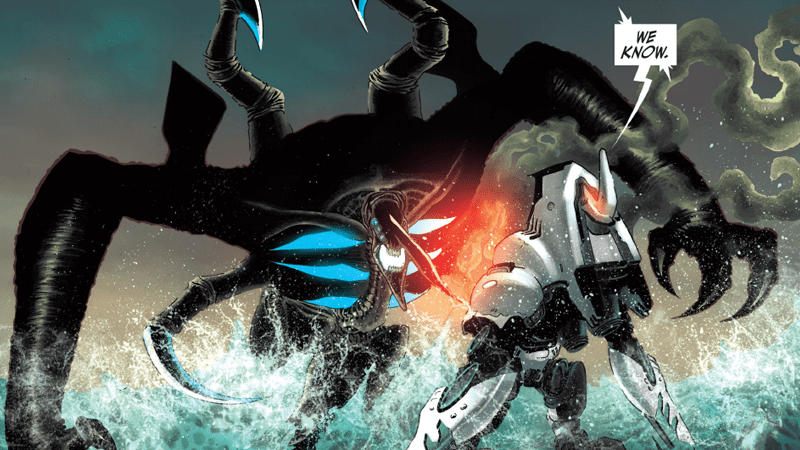 With seamless action, the comic series could have been much more, but fans of the movie should enjoy it nonetheless and it is worth reading for just that reason. Should you want to delve deeper into the world of Pacific Rim, this is worthy of your time. As well, it packs enough in the four issues that one never gets bored. Should the series have gone on longer, it would have likely waned. So thankfully, it ended right when it should have. Readers are given just enough to keep them interested and looking forward to the real possibility of a major motion picture sequel sometime in the near future.

or fans of Pacific Rim, this comic is worth delving into. Unfortunately, for this reviewer, the drawbacks kept the story from being highly recommendable, only modestly so.
REVIEW SCORE
7
File Under: