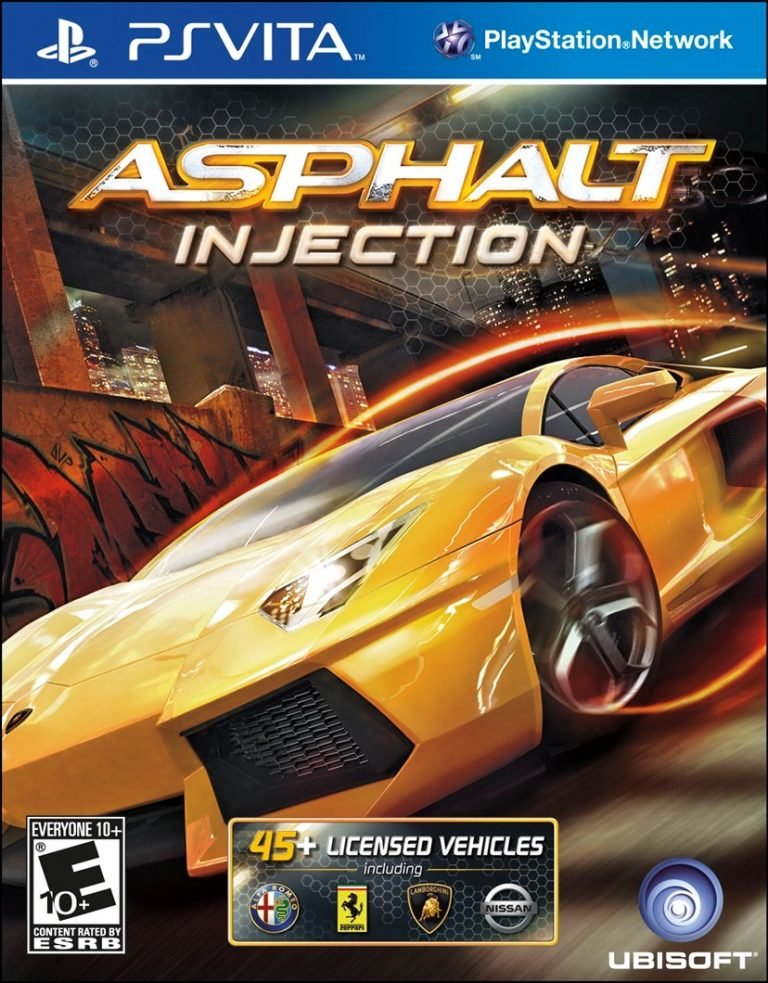 The Asphalt franchise is unique in that it seems to have found a release in nearly every market — iOS included. To see it ported to the PlayStation Vita is a strange sight, indeed, when mobile devices and even the DSi seem to have covered it pretty adequately. Nevertheless, Asphalt Injection makes an appearance on Sony’s latest handheld with a concept that sounds fantastic, but execution that will leave you feeling cold.

Injection bags an impressive lineup of 52 licensed vehicles, online multiplayer, and a plethora of league cups with plenty of races and replay value. And there are plenty of upgrades available to cater to the petrolheads among us — decals, tires, and performance upgrades are available for purchase in the single-player campaign, which finds you collecting power-ups, going head-to-head with the police Need for Speed: Most Wanted style, and racing against the clock. Across twenty unique tracks you can engage in these ten types of events, racking up points and blowing your competition out of the water.

And if the game didn’t flub up some of the major aspects of racers, it’d be a serviceable and accessible racer. While you’re working your hardest to customize your vehicle with new parts and performance enhancers, you’ll find that even the top of the line upgrades mean little when matched up against run-of-the-mill opponents. You may be experimenting with cars that top out at 180 mph or more, and a painfully slow car can still find a space beside you in the competition. It’s quite bizarre, and frustrating as well to know that all the work you’ve put into making the car of your choice the best it can be is all for naught if a poky little racer can still lap you with a vehicle that’s noticeably slower.

The AI of other drivers can be atrocious as well, and in addition to poor collision detection that will see you failing out of events simply because of the game’s poor design it becomes an exercise in patience rather than the high-octane racer it should be. And it’s quite a shame, because despite all the odd design decisions there’s a smooth, practical side to the control scheme that includes usage of the Vita’s rear touch pad. You can shift gears via touch pad, which feels quite natural (and fun), and should you choose to utilize the Vita’s accelerometer, you may use the actual unit to steer. It’s not optimal to play that way, but a cool option to default to, especially when showing off your new system to someone who hasn’t seen one before. It became quickly obvious that steering with the “classic” setup (using the analog stick to steer and one of the face buttons to accelerate) was the best choice overall.

Online multiplayer comes equipped with a robust set of options, including a feature that may be used to take a photo of your game face to send your opponent. This feature may be turned off, but should you suffer a takedown in the middle of a race, your face is sent as a kind of “trophy” to the opponent who emerged victorious over you in any scuffle. It’s an interesting addition and one that makes sense given the series’ popularity among mobile devices, often connected to social networks.

Unfortunately, the rest of the package is quite disappointing. Dim AI, upgrades that feel useless, and unimpressive visuals cripple the experience. It’s a shame, as its several other iterations, namely that of the iPad and mobile variety, serve their purpose quite well and for a much lower entrance price. It could very well be a great racer in the future, a viable alternative to those already on the market, but in its current state you’d do well to pass it over, or choose one of its cheaper releases.

Nevertheless, Asphalt Injection makes an appearance on Sony's latest handheld with a concept that sounds fantastic, but execution that will leave you feeling cold.
REVIEW SCORE
7
File Under: PlayStation