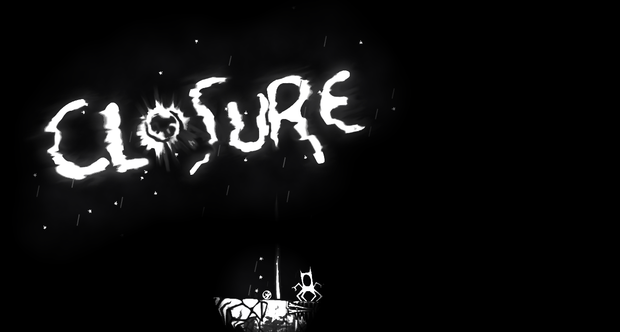 Closure is a fantastic, innovative new puzzle game which has been released on the Playstation Network.  The game is a deceptive platformer, which is actually quite a nuanced puzzle game which experiments with light, and challenges players to approach the game differently than most puzzle games.  Puzzle platformers have a certain formula to them, and it’s with that formula in mind that Eyebrow Interactive has created this game which deviates from that formula.

There’s no real story mode to speak of in this  game, but there are three different levels to tackle and master.  Within each of the three levels are various sub-levels or stages, which have players trying to enter a door with their character.  Sometimes the door is unlocked, and other times the door is locked, and necessitates players first locating and picking up the key, and then making it to the door to unlock it so that they can progress further.

If that’s all that the game was, it’d be fairly boring and standard, as it sounds fairly simple as presented.  The twist in this game is that the majority of the levels are awash in darkness, and so in order to progress through each level, you must stay within the light, lest your character fall to their death.  Light comes in the form of lights that you can position throughout the level, or little ball of light that your character can carry with them throughout the level.  There’s a definite learning curve to this game, as you have to train yourself to think about the levels differently than in most games.  If you know that there’s a column in your way preventing you from jumping, but it’s not actually illuminated, it means that there is no longer a column in the way.  The only obstacles that exist are those that are illuminated, and if you can’t see the obstacle, it no longer exists.  But if you jump to a platform, but fall off of the illuminated portion, it often means death.

It’s the adjustment to the critical thinking process involved in solving the puzzles that makes this such an intriguing and innovative game.  It also made me constantly hear the Back to the Future quote “Marty, you’re not thinking fourth-dimensionally”, which made it all the more entertaining.  The puzzles get increasingly complex as you get further and further through the game, but there’s a definite sense of accomplishment as you pass through additional levels.

Recently I’ve found myself playing a lot of the PSN’s new puzzle game releases, and Closure is one of the best I’ve played.  It’s innovative, it’s challenging, and it isn’t something that’s really been done before.  Learning to think about your surroundings differently because of what you can and can’t see was a fun yet enjoyable challenge.

Recently I’ve found myself playing a lot of the PSN’s new puzzle game releases, and Closure is one of the best I’ve played.
REVIEW SCORE
8
File Under: Indie Game, PlayStation, Strategy