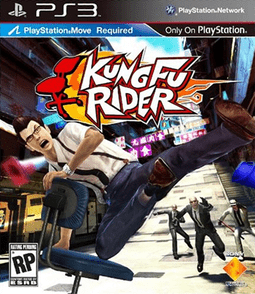 What would a pseudo-system launch be without some kind of baroque offering from the East? Only Japan could create such bizarre titles as Jumping Flash or Irritating Stick and it’s in that tradition that the new Move controller gets Kung Fu Rider, an easy contender for most eccentric launch title for the new peripheral. Kung Fu Rider tasks players with controlling either Toby or Karin, a private investigator and his busty, ditzy assistant, as they… ride office chairs, vacuum cleaners and baby walkers down the hills of downtown Hong Kong to escape the Mafia, more accurately known in Chinese Asia as the Triad

While the premise of the game is indeed a bag full of crazy, the game itself doesn’t achieve the same sense of originality. Unlike most of the new Move titles, this game uses neither the PS Eye camera nor the Move controller itself in ways that show off their abilitie Flick the Move controller up and your character jump Thrust it forward for a power dash, and angle it left or right to steer. These are hardly precise moves, and the sensitivity of the game itself feels on the low side when detecting these gesture The result is a game that could have easily been created for the Wii, since there’s a distinct, “waggle-esque” feel to the interface, which is not helped by the unimpressive visuals of the game. Also included is a random photography feature that snaps a picture of you via the PS Eye and shows it off at the end of a round, but considering there’s no moving around or reaction shots required of you as a player, repeatedly being shown pictures of yourself holding the controller while comfortably sitting and playing is not much of a feature. Graphically, the game feels like something from the PS2 era, and the audio effects, in particular the over the top English dub, also feel like a throwback to the days when Japanese developers cared little for how their games performed outside of Japan. To its credit, there are some catchy, original compositions that play in the background during the game, invoking the almost neurotic, relentless cheer that J-Pop is best known for, but that does little to help a game where it’s clear a lot of corners were cut.

The game itself consists of little more than playing through a few levels over and over again, with more obstacles to negotiate at higher difficulties, and an exploration mode with no timer or health to collect “medals” for unlocking items and area What’s on display in Kung Fu Riders works, with no game breaking glitches or bugs, but the game itself is extremely limited in scope, and, even at the lower $40 price point for Move games, is hard to justify. Had this game been a downloadable title, at $15 or less, it would probably be easier to recommend, as there is some novelty in the bizarre premise.

Kung Fu Riders looks, feels and plays like a game you might enjoy in an arcade. It’s got a limited, focused play mechanic, limited content, does not exploit the strengths of Move, and has a last-gen look and feel to it. This is probably the kind of game you’ll want to wait on a sale for as the $40 asking price is a bit steep for a game with such limited replay factor. The Wii-esque waggling certainly doesn’t help its case either, so while there’s nothing fundamentally broken about the game, there’s nothing to recommend it aside from filling out a space in the “crazy Japanese game” section of your gaming library, if indeed you have one. -ws

Kung Fu Riders looks, feels and plays like a game you might enjoy in an arcade.
REVIEW SCORE
6
File Under: Action, Adventure, PlayStation