Throw Food Online While your Friends are Engulfed in Flames 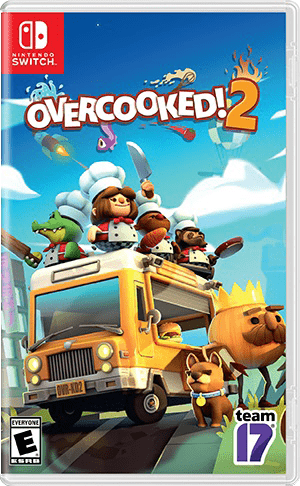 Sequels can be many things. They can be something drastically different like Super Mario Bros. 2 or The Legend of Zelda: Link’s Adventure, or they can be just more of the same. Overcooked! 2 is the latter.

The cutesie characters and frantic action are back and pretty much how you remember them if you played the first game, only with new recipes (most of which are sushi for some reason), the ability to throw ingredients, buttons that control conveyor belts, moveable platforms, and the ability to play online with your friends or even wirelessly between consoles if playing on the Nintendo Switch.

The core gameplay still involves frantically preparing meals by chopping ingredients, cooking them just right, plating them, and serving in a timely manner to maximize points. The ability to throw ingredients has been added, with many levels requiring it as chefs will be separated in two separate areas, such as on two wooden rafts rapidly moving down a river. Also new to the series are portal doors that can warp you between areas, stages that transform as you play such as a hot air balloon crashing to the ground or construction workers reconfiguring your kitchen as they work.

The original game has 28 stages, while Overcooked! 2 has over 45 which feature a great deal more variety taking place in magical castles, Japanese restaurants, the street, and even space.

Even with more stages, Overcooked! 2 somehow manages to feel a bit shorter thanks to being quite a bit easier overall (at least from this critics point of view). In the original game, I had quite a bit of trouble advancing as the game demanded that you three star practically every stage to advance in the story mode, whereas here you generally can get by with one or two stars into much later into the game. This means less repetition if you’re not a completionist, but also levels that are easier to breeze through, even with the new game mechanics.

Online play appears to be available in every mode, including the story although it lacks matchmaking requiring you to create a lobby that friends can join over the internet, via split-screen, or via the wireless connectivity of the Switch pending you have another friend with their own copy of the game. I didn’t get a lot of time to spend with the online mode, but the few matches I played run okay at best with a bit of stuttering here and there, though that could have been due to matching players in Europe or Japan where the game has already been released at retail.

Performance wise Overcooked! 2 runs fine on the Nintendo Switch but does look a bit washed out in comparison to other versions. This would be admissible if it didn’t make it hard to tell which ingredient is where thanks to them being similarly coloured and shaped. There was more than once where I found myself trying to grab a tortilla and I’d actually grab a chicken leg thanks to the game’s poor contrast. Playing with Joy-Cons was less than ideal thanks to their shorts sticks and gameplay requiring precision, although I’m not sure it matters when frantically playing with 3 other friends.

That is where Overcooked! 2 shines, just like its predecessor.  Playing with friends is a treat and really the best way to experience this game. Not only can you play through the story mode together (though the actual story is next to non-existent), but also an arcade mode that randomly selects levels, and a versus mode that pits you against other chefs. This is one of the best pick-up-and-play cooperative games out there, especially for people who may not play games a lot thanks to the simple controls and simplistic yet frantic gameplay.

Overcooked! 2 may not feel like a fully realized sequel, feeling mostly like more of the same with just a dash of new mechanics and online gameplay, but I suspect that's enough for most fans of the original game. I'm certainly not burnt out just yet.
REVIEW SCORE
8.5
File Under: Team 17