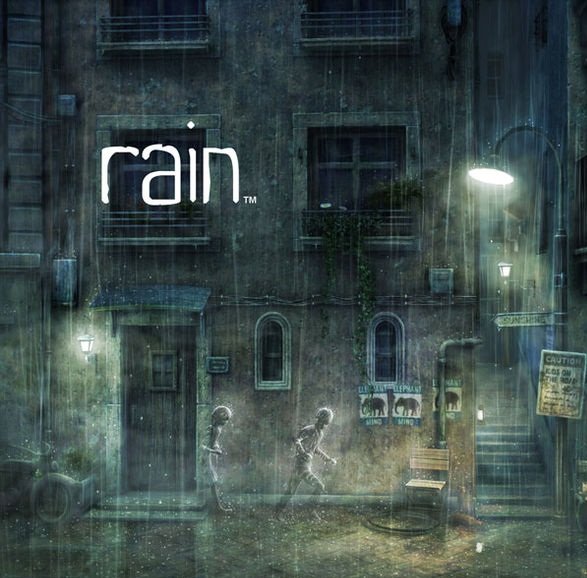 What you (don’t) see is what you get

I’m of two minds about Rain.  Developed by PlayStation C.A.M.P., the studio behind the quirky, also PS3-exclusive Tokyo Jungle, Rain continues SCE Japan Studio’s legacy of creating original and artistic works of gaming art. In fact, the game’s premise, where a young boy is charged with protecting a young girl’s life in addition to his own from otherworldly monsters, is remarkably similar to that of Team ICO’s self-titled PS2 classic, ICO.  It makes a genuine effort to attain the same level of gravitas and emotional connection with the player as both ICO and its spiritual successor, Shadow of the Colossus, have done. Nonetheless, there is a big difference between a game that transcends itself and becomes an experience, and an experience that attempts to be a game. Like its young protagonists (known simply as The Boy and The Girl), Rain seems to be caught in a sort of limbo between the two.

On paper, Rain seems like the perfect, bite-sized puzzle-adventure game to bring to PSN. As a boy experiencing a fever dream in which he has turned invisible and can only be seen by others as well as himself when rain is falling down on him, the game’s central mechanic requires that the player wisely use the boy’s curse to avoid, outwit and defeat the creatures that stalk him. As the setting for this adventure is a rustic, early 20th Century Spanish town drenched in a constant evening downpour, the game presents the player with several interesting challenges. When under shelter (such as a roof or other structure), The Boy is invisible, but he is also invisible to the player, apart from the wet footprints his feet leave behind on the pavement or the ripples they create in deep water. The player must exercise caution in this state lest he or she accidentally maneuver The Boy into the path of a deadly beast. When sheltered, The Boy can move in relative safety amongst the monsters unless he makes too much noise or decides to step out into the rain again. However, in order to progress past a monster that blocks his way, the boy must occasionally allow himself to be seen or heard, then quickly disappear back into the safety of shelter or reach an area inaccessible to the alerted creatures in order to avoid certain death. There  are large puddles that create splashing sounds when the boy runs through them, mud puddles that make the boy’s feet or entire body visible until he can find a clear puddle and water sources big enough to wash the mud off as part of the stealth mechanics. There are also monsters that can break through gates and other barriers, including a sentient, ever-pursuing, club-wielding giant called The Unknown. These elements make for delightfully tense conundrums that Rain‘s simple gimmick potentially offers to fans of puzzle-games.

Unfortunately, the large majority of the puzzles on offer in Rain are disappointingly one-note and incredibly simple, often spelled out for the player via glowing objects and areas in the environment, and can only be solved one way, despite the rules of the game suggesting that there might be another. For instance, The Boy, while invisible, can attract The Unknown’s attention by running through a puddle of water right next to it.  However, should he loudly hop up and down right in front of the same creature from behind a fence, The Unknown will simply ignore him, because in that instance he wasn’t programmed to respond to that type of noise.  Later on, once The Boy and The Girl unite to take on the world of Rain together, one would expect the game’s brainteasers to take on a greater complexity, but instead the effect is the opposite. The Girl, who is cursed with the same invisible affliction as The Boy, actually knows where she is going, mutely leading the player along by the hand, pointing out every flashing object to be pushed, and every overhang to hide under. The Girl’s tendency to stick right to the path also accentuates the sad emptiness of Rain’s beautiful seaside-town streets. They beckon the player to wander down many an alleyway veering off the main path, only to reward such exploration with ironically placed invisible walls, some of them even blocking what would have been an alternative path in a better-designed game. It makes many of Rain’s “how do I get from point A to point B” puzzles feel more artificial than necessary.

While I personally found the above issues a bit confounding, I still found the game to be quite enjoyable once I resolved to view Rain strictly as a game for children (and beginner gamers), as the simplicity of the controls (the player is never forced to use more than two buttons outside of the pause button and analog stick), the linearity of the puzzles and the lack of almost any extras (e.g. collectibles – these are only unlocked via a second playthrough and don’t affect gameplay) contribute to a streamlined puzzle-adventure experience that seems aimed at an audience unfamiliar with these sorts of games. The no frills gameplay encourages the player to concentrate on the story and the emotional state of the characters, which play a large part in the game’s final chapters as the metaphors of the town, the role of The Unknown and the predicament of The Children become clear. Admittedly, even I had a lump in my throat during the final scenes.

So is Rain a must-play game?  At $15, not really, when there are dozens of other games on PSN for around the same price or less that could provide you the same sort of experience, not to mention a lot more game (Rain can be completed in just a few hours). The real question is “Is it a must-play experience?”  The answer to that question is absolutely, but the advice of this reviewer would be to wait until an appropriate sale on the PlayStation store and/or PS Plus before diving in.