Grab your friends and hit the junkyard 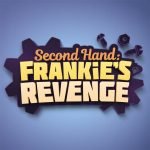 Recently, I’ve been feeling some burn out from playing major AAA games. While it’s always exciting to jump into a massive new open world or discover a new title that you’d love to immerse yourself in for countless hours, sometimes you just need to unwind with a smaller experience that’s easy to pick up and play with a couple friends for an entertaining evening.

Developed by Transylvania based studio, Rikodu, Second Hand: Frankie’s Revenge is a perfect example of one of these types of games. Despite the negative stigma surrounding early access releases, this game manages to overcome those expectations and deliver a fun time for both families and friends alike.

After the Earth is invaded by aliens, the world’s workforce of robots and machines have been reprogrammed to do their evil bidding. Players take the role of “Frankie”, the last remaining sentient robot made up of the second-hand appliances found in your local junkyard. Now out with a vengeance to free his fellow robots from the alien’s vile clutches, Frankie will do anything necessary to thwart their schemes, but he doesn’t have to go it all alone. Up to four players can team up online and have fun kicking some robot ass.

A unique feature of Frankie is that he is completely modular. As players run through levels and complete objectives, more components, weapons and accessories will unlock for players to experiment with. From chainsaws to tennis ball launchers, and even disco balls as well, everything but the kitchen sink can be used in some way to defeat these alienized robots. Customizing Frankie is a major component of the game and I enjoy the build variety players have at their disposal. Depending on the items players outfit him with, Frankie can fulfill different party roles or be tuned to the player’s personal playstyle. I personally outfitted my Frankie to be a ranged specialist. Equipped with a glue gun, a rifle and a mortar cannon for a head, no robot was stepping within two feet of me without getting slowed down to a crawl or being blown to smithereens.

As of writing this review, one full campaign is available to play through at launch, while the second campaign is currently awaiting the release of its climactic boss battle. While the pool of content has yet to reach its full potential, I enjoyed the pacing and variety of objectives players had to complete in each mission. One mission players will be running through the levels of a skyscraper, rigging it to blow with C4, while the next players could be in the bayou avoiding the rising water hazards as they liberate a town from alien control.

Performance wise, I had no trouble running Second Hand: Frankie’s Revenge on my mid-range pc. Rikodu has used the benefits of the Unity engine to great effect here. Both the visuals and the effects look sharp and have a nice cartoony aesthetic to them, but nothing present here should be taxing on any modern pc or notebook. I also didn’t run into any major game breaking bugs or encounter any problems with progression while running through the levels solo or online with friends either.

My one major critique with Frankie’s Revenge would have to be level up progression. Currently, when players complete a mission they will receive exp and a lootbox every time they level up containing a cosmetic item. These cosmetics can range from skins for Frankie’s parts, items to customize your hideout with, as well as profile picture avatars. While not totally invasive, I don’t think a lootbox mechanic should really be present in a game of this scale, especially when some of the most fun is freely customizing your Frankie whatever way you want. Players can use currency they obtain in-game to purchase any of these cosmetic items, but if Rikodu intends to keep this mechanic, I think the rate needs to be adjusted more in favour of the player going forward into development to minimize grinding.

Second Hand: Frankie’s Revenge may be a work in progress, but if Rikodu continues to release content of this quality and polish, there’s no doubt in my mind they’ll have a great indie title on their hands when the project is complete. I look forward to seeing how the game develops further and I hope the team can be even more ambitious with their ideas for their next campaign after they finish releasing the next boss battle.