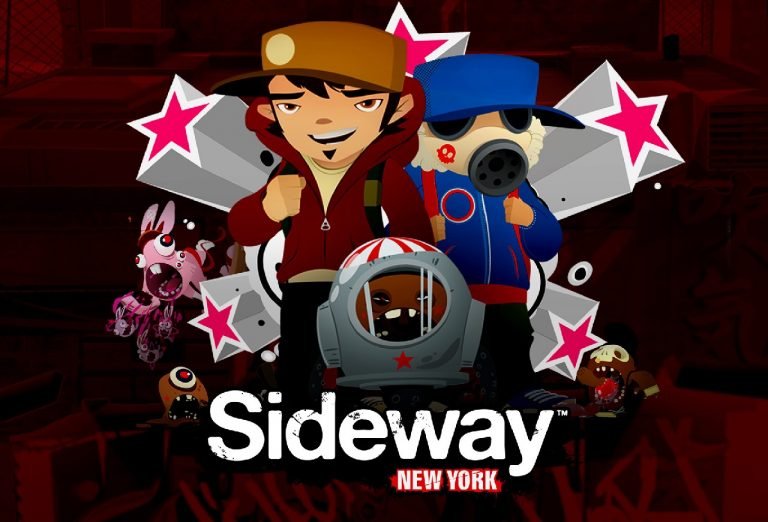 It’s too bad that many people are likely to overlook Sideway: New York due to its surface trappings when, despite a pretty lame aesthetic that apes hip-hop culture filtered by “kid-friendly” sensibilities, it’s a pretty great game that’s likely to appeal to a far wider audience than it will ever reach.

In Sideway, you play as Nox, an unfortunately named graffiti artist decked out in a hoodie, Castro cap and soul patch, who has been transformed into a mobile, spray-painted portrait of his rad self. His best bud Cass is missing as well, transported somewhere inside the world of Sideway — a place where everyone exists as graffiti on the walls of city buildings and, of course, the setting of the game. Reaching and defeating Spray, the big bad of Sideway, is your ultimate goal and, like a nefarious Bowser, he is always lurking in the background, gloating over every one of your deaths, the screen wiping with an ominous silhouette and the rumble of a deep bass “ho, ho, ho.”

Sideway looks like a cross between a Saturday morning cartoon and an early 2000s nü-metal album cover. Bright colours and sharp outlines mix with sanitized graffiti to create a kind of cleaned-up urban landscape that is likely, for many people, to be sort of off-putting in its cutesy take on a “gritty” city. Luckily, the worst aspects of the game’s appearance (like your player character and his friends) are drowned out by the more compelling artwork of the level design — a good thing considering that the minutia of a given stage is more likely to catch your eye than the character art. Aside from a Skullcandy endorsement (that isn’t too egregious considering that the headphone company’s logo is just a stylized skull that fits in well alongside the rest of the game’s graffiti) Sideway: New York rarely feels like it’s trying too hard to be something it’s not.

This is mostly thanks to the aforementioned level design — an interesting idea that sees the game’s aesthetic neatly combined with a constantly shifting perspective, creating a design hook that goes beyond just a surface visual style. Sideway is, from moment to moment, a side-scrolling 2D platformer, but each piece of a level plays out on the sides of 3D models. Nox, painted on the side of a wall, can jump onto a roof, for example, and the game’s camera swings easily to this new perspective so that the player is now exploring a related area from a different plane. This makes for a lot of fun, level traversal depending on a player’s willingness to think outside of traditional understandings of game design. Some of Sideway’s most thrilling moments involve leaps of faith from one side of a building’s face to another, something that works well (and avoids causing nausea) by the virtues of the developer’s obvious commitment toward crafting logically-sound but innovative gameplay.

Though most of the levels see you carefully timing jumps and taking out enemies, Sideway: New York also has a few interesting puzzles that force players to interact with the level’s shifting perspectives in a deeper way. The puzzles are never more complex than flipping switches or changing to a different 2D plane to explore a new segment of a stage, but they help to give the game another layer of depth that would have been lost by overly relying on Sideway’s basic platforming play.

Sadly, at times, the game’s responsiveness (a key point in any platformer) seems a bit lacking. One particular point in Sideway’s last act is so frustrating that it threatened the completion of this review. My right hand, index finger numb from holding down the R1 button, had turned into a claw from a sequence that requires the player to continuously swing Nox from moving platform to moving platform to progress up the face of a building. Moments like these reveal Sideway’s lack of response to fine movement in crucial moments. When the action is less demanding — as in most of the rest of the game — it’s difficult to notice and, because of this, hard to be too upset over. Just the same, a little more attention to refined controls could go a long way toward making hard moments Super Meat Boy frustrating (“just one more try”) instead of . . . well, just plain frustrating.

There’s also a simple upgrade system that gives Nox new powers (like the ability to double jump, form a protective barrier around himself or use different types of paint attacks) and increases health and paint reserves. It all works really well, urging the player on with little progressions that continually build on an already solid foundation. This combines with a design that encourages high-score attempts (hard to reach, collectable “tags” dot every stage) and the ability to run levels with a second player (in local co-op) make for a fulfilling and replay-friendly title.

Sideway only really falters with its boss fights, stages that cap off every third area with Mega Man-style learn-the-pattern-and-exploit-it combat. The problem with these segments is in their flip-flopping difficulty — some are dead easy (including, sadly, the final boss) while others are completely unforgiving, forcing players to restart a segment with lengthy, unskippable intros if they blunder into a one-hit kill. If the inevitable sequel, already hinted at in the abrupt end sequence, finds a way to refine these levels, it will go a long way toward correcting one of the only gameplay missteps present.

The game’s soundtrack, by Mr. Lif, isn’t bad but it does leave a lot to be desired. Some of the tracks fit the game’s aesthetic wonderfully, but there simply aren’t enough of them. If a given level takes about 20 minutes to finish, the player can expect to be hitting the mute button halfway through because of the sheer, mind-numbing repetition of a hearing a three minute tune over and over. It seems to be a pretty big missed opportunity for Sideway to opt for an entirely pre-set soundtrack instead of letting users supplement the meagre score with some of their own tunes. I would’ve given a lot to be able to transplant the game’s repetitive loops with something that better fit the game’s tone (a cup of A Tribe Called Quest, a couple tablespoons of Beastie Boys and a pinch of Mos Def would make a pretty tasty companion) and provided some extra variety.

Even in light of a few complaints, Sideway: New York still succeeds. It’s a unique game that, at $10, is a lot more fun and a lot more ambitious than the bulk of big-budget, full-priced AAA titles — and just this attempt at innovation makes it well worth a look.